The State of Informal Waste Workers in India

There are approximately 4 million informal waste pickers in India today (Dandapani 2017). These workers engage in recycling activities that are crucial to the health of our ecosystem, as well as help in significantly reducing the waste collection costs for the government. However, they face multiple, overlapping shocks and stresses while trying to build a sustainable livelihood for themselves, which puts them in an extremely vulnerable position. The informal nature of their job, and the undue prejudice and stigma around it, pose distinct challenges related to recognition of their work, their acceptance in the society, as well as their legal and economic status. The paper attempts to propose systematic interventions to overcome these challenges and integrate informal waste workers in the formal solid waste management system of our country, to help them achieve sustainable livelihoods.

Rising solid waste generation is a troublesome and expensive issue, particularly for low and middle-income countries. Economic development, rapid population growth, and urbanisation have led to increased resource consumption, subsequently causing the rate of waste generation to rise exponentially in the last few decades. Not only is the amount of waste generated directly proportional to per capita income  (Kaushal, Varghese and Chabukdhara 2012), studies have also suggested that the amount of waste generated in urban areas is almost double of that in rural areas (Hoornweg and Bhada-Tata 2012). In  India alone, 377 million people living in cities were responsible for the generation of 62 million tonnes of municipal solid waste in 2018 (Lahiry 2019). 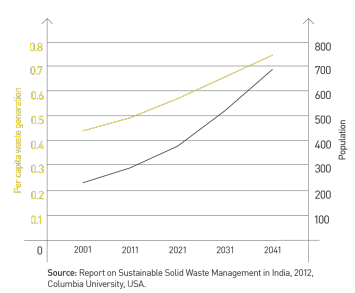 Taking into consideration waste collection and disposal, India has an average collection rate efficiency of  50 to 60%. However, only 10% of the waste receives safe treatment, owing to a dearth of disposal sites  (Swaminathan 2018). India’s Urban Local Bodies (ULBs, hereafter) have not been successful in managing the huge amount of waste generated due to the financial gaps, institutional debilities and long-term under-investment, which has reinforced a poor infrastructure to manage waste (Mani and Singh 2016; National  Institute of Urban Affairs 2015: 4). 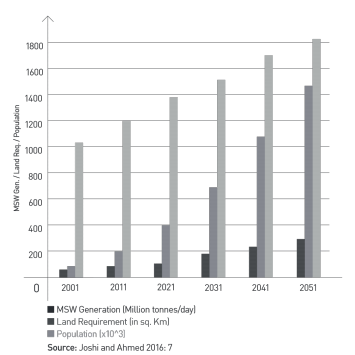 When looking at budgetary allocations, it is clear that while 80 to 90% of the resources are dedicated for waste collection processes, only 10% remains for waste treatment and disposal (National Institute of Urban Affairs 2015). An assessment done by the Comptroller and Auditor General of India in 2018  on ULBs in Karnataka, suggested that municipal bodies were unable to implement an effective waste management system on time due to scant coordination with the state government, as well as inadequate infrastructure and planning (Upadhyaya 2019).