Open defecation, and the resultant contamination of water, has been an endemic problem associated with sanitation in India. The Lancet Journal, for instance, notes that over 105,000 children under the age of five died due to diarrheal diseases in 2015 [1]. These diseases, however, are preventable; “Better water, sanitation, and hygiene could prevent the deaths of 297,000 children under the age of five each year” [2]. Therefore, in order to ensure healthy and safe sanitation practices, the Swachh Bharat Mission planned to construct toilets and implement behavioural and community strategies for people to stop defecating in the open.

Another issue which the SBM sought to address was women’s safety. UNICEF, for instance, reports that women pay the heaviest price for poor sanitation, and 50% of rapes in rural India occur when women defecate in the open. Linked to this are larger issues associated with privacy and social stigmas related to menstrual and reproductive hygiene, along with heightened risk to infections that are contracted due to general lack of access to sanitation facilities. Because of these reasons, a report by the Ministry of Drinking Water and Sanitation necessitated on the active involvement of women in the SBM-G committees and institutions like WASH (Nigrani Committees), along with spreading awareness through women Self Help Groups who take on the responsibilities of disseminating information regarding toilet habits, menstrual hygiene and problems associated with poor sanitation [3]. Women thus play a dual role in the mission; “both as the prime beneficiaries of the safety, health and dignity afforded by safe sanitation practices, and, even more importantly, as the leaders of this movement at the grassroots”[4].

The Government of India plans to make the country open defecation free by October 2019. So far, 959.24 lakh toilets have been built across India, and 27 states and Union Territories have been declared open defecation free (ODF) [5]. A sanitation survey conducted by the RICE institute in the states of Bihar, Madhya Pradesh, Rajasthan and Uttar Pradesh [6], highlighted that access to toilets increased significantly in these states between 2014 and 2018. Madhya Pradesh and Uttar Pradesh saw the highest increase, at 43 percentage points and 26 percentage points, respectively [7].

KEY FACTORS AFFECTING THE PROGRESS OF SANITATION IN INDIA:

In 2019, a working paper published by RICE, in collaboration with Delhi based think tank Accountability Initiative (AI), declared that open defecation persists despite toilet construction [8]. The paper suggested that over 23% of the population in the states mentioned above continued to defecate in the open despite toilet construction in both 2014 and 2018. The states of Rajasthan and Madhya Pradesh, which claimed to be ODF, continue to have 53% and 25% of the population defecating in the open, respectively. 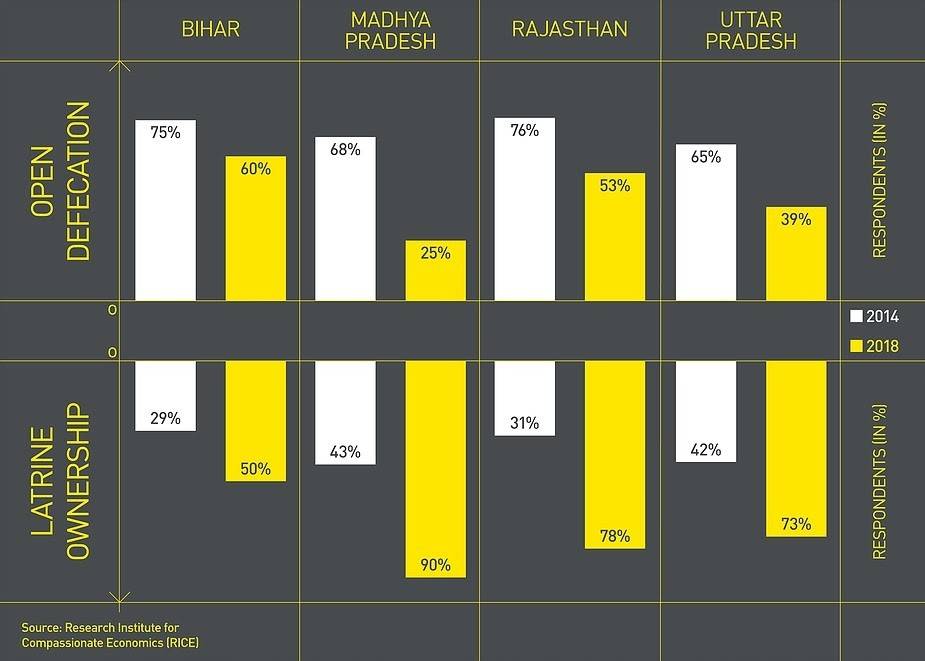 The paper also revealed that local officials “stressed on toilet construction rather than addressing the problems concerned with the usage of those toilets and other behavioural challenges.” The issues concerned with toilet usage, therefore, reveal “operational barriers and major implementation challenges” [9]. These major implementation challenges come in the form of issues related to inadequate toilet infrastructure, social stigmas, and ineffective community awareness. 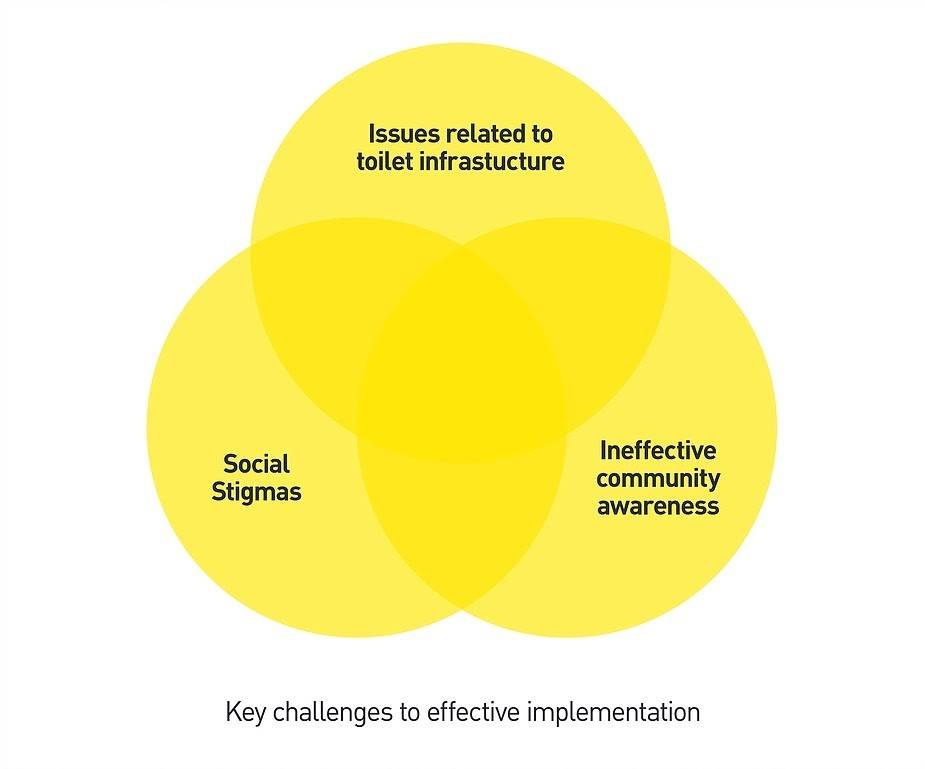 Water shortage remains one of the major factors behind the disuse of toilets in many villages. For instance, a 2018 CAG report claimed that 83% of rural Indian households rely on community water sources [10].

Community ownership of water resources, coupled with receding water levels during summers, is proving to be a major hindrance in the effective usage of toilets, especially in drought-prone areas of Maharashtra, Madhya Pradesh, Gujarat, and Tamil Nadu. The Central Ground Water Board reported that, in 2015, 6,228 wells in these four states showed a decrease in water levels of up to 2 metres [11].  Furthermore, it has been noted that due to receding water levels, people prefer using water for cooking or drinking purposes, rather than sanitation. A survey done by the National Sample Survey Organisation (NSSO) in 2016 observed that 42.5% of respondents said that they had water access in their toilets, while 57.5% said that they preferred to store water for cooking and drinking, rather than sanitation, due to the erratic nature of supply in their areas [11].

Over the past five years, since SBM became a priority, some villagers had self- constructed toilets, while others got their toilets constructed by contractors appointed by local government officials. The 2018 RICE report concluded that people who had self- constructed toilets were 10% less likely to defecate in the open. This reveals issues related to toilet construction. For instance,  a report showed that the toilets constructed by contractors in the Dang district of Gujarat had weak structures and materials that would often collapse, further highlighting implementation gaps, where contractors would cut corners and would often end up sacrificing the quality of the toilets built [12].

However, the problem of open defecation is not just limited to inefficient toilet construction.

There is a ‘stigma’ directly related to the types of latrines constructed during the Swachh Bharat Mission. It was noted that the Swachh Bharat Mission (Gramin), in particular, focuses on constructing twin pit latrines as they are “scalable, implementable and cost-effective and therefore can have a great impact in making rural India open defecation free (ODF)” [13]. In the twin pit model, feces in the first pit decomposes and the other pit can be used for defecation. The decomposed feces from the first pit can then be cleared out in a less hazardous manner [14].

Despite this understanding, the single pit is the most widely used sanitation structure (40%). Issues associated with this structure comes from its ineffective waste disposal system; that is that the pit has to be manually emptied [14].

The cleaning of human waste has traditionally been linked to the caste hierarchy in India, whereby Dalit communities are often relegated to tasks considered too degrading and menial for higher caste individuals;

“Widespread open defecation in rural India is not entirely attributable to relative material or educational deprivation, but also to beliefs, values, and norms about purity, pollution, caste, and untouchability” [15].

Accountability Initiative’s (AI) 2017 survey found that 86% of households which owned latrines employed manual scavengers to empty the structures. This further highlights the prevalence of the practice of Manual Scavenging, which is otherwise banned by the Government of India [16].

Furthermore, the majority of manual scavengers are women, highlighting the double jeopardy of caste and gender these women often face. Concurrently, it has been reported that 95% of women who manually engage in removing human excreta from dry latrines are paid in kind, as opposed to men who are paid in cash [17].

The mission, thus, must address the interplay of caste hierarchy and gender-based discrimination which communities involved in manual scavenging often face.

SBM, along with its drive to create more toilets, also emphasises behavioural strategies to ensure clean sanitation habits among individuals.

However, there are levels of nuance associated with individual behaviours as well. It has been observed that people at an individual level do not practice clean sanitation habits, as some individuals prefer to defecate in the open with ease and access to fresh air, instead of using latrines, even though the latter might be a more hygienic practice.

Some also believe that open defecation is one of the ways to project one’s masculinity and would rather choose to construct toilets for their wives and daughters [18].

Therefore, in order to improve sanitation habits, it is necessary for the program to understand community awareness to mitigate social stigmas, find economical solutions by involving people and making the practice desirable among the community at large.

In order to have effective community engagement for ensuring sustainable toilet habits, SBM chose the strategy of IEC (Information, Education and Communication) and IPC (Interpersonal Communication) along with community practices like Community Led Total Sanitation (CLTS).

CLTS is a communications approach that ensures a sense of ownership among individuals within communities to adopt safe and effective sanitation techniques. CLTS  employs ‘triggers’ in the form of disgust and shame, through skilled facilitators and public officials.

For instance, in West Bengal, facilitators employed CLTS strategies through the trigger of shame by questioning the older women about the implications of their own daughter-in-laws defecating in the open [19].

Certain states in India also show a limited level of community involvement which is often attributed to problems of capacity building under CLTS. These include the lack of skilled personnel and organisations to train facilitators and public officials on how to effectively engage with people [21].

Moreover, in Madhya Pradesh, issues arising from the local contractors-Panchayati Raj institution (PRI) nexus have caused problems in the construction of toilets for communities there. While CLTS tries to ensure the quality construction of toilets from subsidies by disseminating information regarding toilet construction and usage amongst the populace [21], implementation gaps arise due to corruption.

The National Annual Rural Sanitation Survey (NARSS 2018-19) reports on the proportion of villages verified as ODF fell from 95.6% to 90.7%. This shows that there is a need for techniques which ensure sustainable behavioural changes among individuals over time [22]. It is then necessary for the mission to understand the problems of social disparities at the individual, as well as community level, and to be able to disseminate information about the ills of open defecation to every section of the society.

Swachh Bharat Mission has made significant progress, which has also been evaluated by major organisations through various analyses. A survey by Bill and Melinda Gates Foundation (BMGF), for instance, reported that incidences of malnutrition and diarrhea were significantly less in ODF states than in non-ODF states [23]. Thus, concluding that good sanitation habits lead to better health outcomes for people.

The Indian Government is also taking the initiative to implement an effective water connection network, which is essential to sanitation based infrastructure. ‘Nal se Jal’, the yet-to-be formally initiated scheme, aims to provide piped drinking water to every rural home by 2024. This scheme would be especially important in solving gaps in sanitation practices in drought-prone areas of the country.

[6] https://riceinstitute.org/data/2014-and-2018-rural-sanitation-surveys/ [half of the households in these states did not have toilets and people defecate in the open]