The first in the Issue Brief Series on India’s Urban Transition, ‘Defining the Urban’ highlights the definitional issues with available data on urbanisation, with a special focus on Census Towns and the impact these ambiguous definitions have on the growth potential of these semi-urban spaces.

India’s rapidly expanding urban population (see Figure 1) has become a key signifier of modernity, engendering a culture that subsumes existing forms of governance and gives rise to novel socio-economic issues. Though urban centres have existed in India since antiquity, the development of the country’s modern cities picked up pace during the British Raj with the advent of ‘presidencies’. The process of urbanisation spurred on in independent India, wherein the newly formed state highlighted the development and economic growth as the primary drivers of modernisation. As such, methods of classifying the urban population took up centre stage in the country’s demographic mechanism, as well as urban policy discourse. 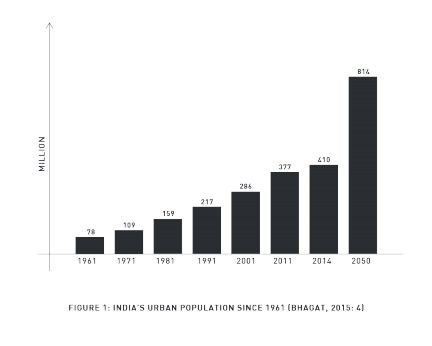 THE PROBLEM OF CLASSIFICATION

The Census of India makes a broad classification between rural and urban-based on criteria that have remained unchanged since the Census of 1961. Dividing the ‘urban’ amongst statutory towns, census towns,  outgrowths, and urban agglomerations, the Census provides a classificatory definition for each, as listed in Table 1 below.

The conceptualisation of the rural-urban divide, as evident in the way the census defines statutory and census towns, stems prominently from the nature of governance in an area and the occupation of the majority of its male working population. Rural areas in India are governed by rural local bodies such as panchayats,  while urban areas are governed by urban local bodies such as municipal corporations. While rural areas are associated with agriculture-based occupations, economic growth, led by sectoral diversification, is linked to urban areas. For instance, economically better off states like Maharashtra, Kerala, Tamil Nadu and Gujarat have urbanisation rates higher than 40% compared to relatively poor states like Bihar and Odisha which have less than 20% urbanisation rates (Tumbe 2016: 5).

Why Gender Matters: Climate Change and Agriculture in India