In its biennial report, the Indian government has pointed out the country’s vulnerability to natural disasters, including floods, droughts, and cyclones, exacerbated by changing demographics and socio-economic conditions [1]. The issue of climate change has also featured on the manifesto of two major political parties, against the backdrop of the 17th Lok Sabha elections.

The country currently ranks 14th in the Global Climate Risk Index 2019 [2] and is also among the bottom five countries on the Global Environment Performance Index 2018 [3] – plummeting 36 points from 141 in 2016. Owing to India’s poor air quality, the report warns of a severe public health crisis fuelled by rapid economic growth. India witnessed 1.24 million deaths in 2017 due to its toxic air [4] and the nation also has 11 of the world’s top 12 most polluted cities [5].

Given the environmental realities that the country is dealing with – rising temperatures have reduced agricultural productivity by adversely affecting farm yields, and the nation faces the highest levels of displacement associated with climate-related disasters in South Asia [6] – it is crucial to put into perspective India’s commitments and its fight against an imminent climate crisis.

India was accorded the ‘2°C compatible’ rating by the Climate Action Tracker (CAT), indicating that the country’s Nationally Determined Contributions (NDC) targets are within the range of what is considered to be a ‘fair share’ of global effort, but are not consistent with the Paris Agreement [7]. In other words, if all countries were to follow India’s approach, global warming could be held slightly below 2°C, but it would still be too high to be consistent with the Paris Agreement’s 1.5°C temperature limit. The report by the Intergovernmental Panel on Climate Change (IPCC) had warned about the catastrophic impacts of climate change if global warming exceeds 2°C above pre-industrial levels, stressing the importance of limiting it below 1.5°C.

India’s NDC has three main goals: first, reducing the emissions intensity of GDP by 33% – 35% by 2030 below 2005 levels; second, increasing the share of non-fossil-based energy resources to 40% of installed electric power capacity by 2030; and third, creating an additional carbon sink of 2.5–3 billion tonnes of CO2 equivalent through additional forest and tree cover by 2030 [7]. 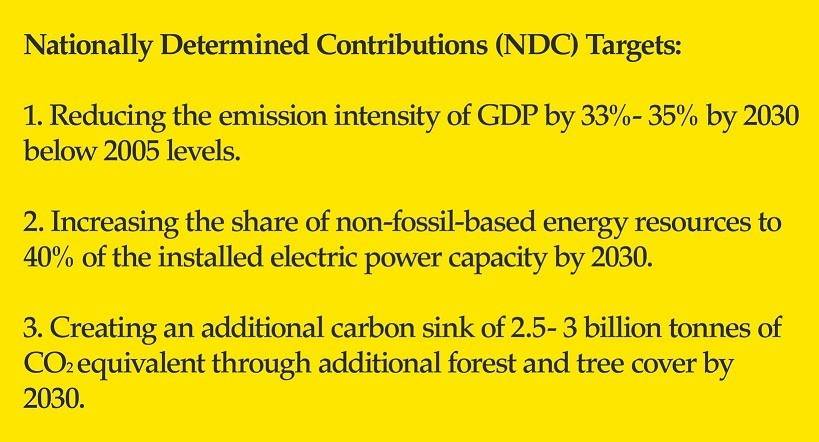 It has been noted that India may achieve its intended goal of achieving 40% installed electric power capacity from non-fossil fuel based resources ahead of schedule [7]. India has also managed to improve its ranking on the Climate Change Performance Index 2018, by climbing three points to rank 11 [8]. By improving its performance in the renewable energy sector, the country has joined the group of ‘medium’ performers.

According to CAT, the Indian government’s long term growth strategies aim at ‘decoupling’ carbon emissions from economic growth. CAT also projects that India may ‘overachieve’ its emissions intensity target. Moreover, investments in renewable power in the country outpaced those in fossil-fuel based power for the third time in a row, due in part to the declining cost of solar power.

However, concerns have been raised about India’s climate change commitments.

India’s continued and heavy reliance on coal may counteract the progress it has made in the renewable energy sector. It is the world’s second largest consumer of coal after China [9]. Coal India Limited (CIL), the world’s largest coal mining company (and the largest greenhouse gas emitter), is responsible for 85% of the country’s coal production [10]. The central government owns about three-quarters of CIL, and while coal-producing states continue to be among the poorest, CIL contributes employment and significant tax revenue in these states [10]. A move away from coal would, therefore, require ‘just transition’ for coal workers by assisting those who get displaced and lose their jobs due to environmental protection policies. Although India’s second biennial update report (BUR) talks about the creation of ‘green jobs’, it makes no mention of workers whose livelihood depends on coal [11]. In 2017, 16 coal mining projects were cleared by the government, and coal-fired power plants continue to increase [12]. While the draft National Electricity Plan (NEP) projected no requirement of coal capacity after 2022, the final NEP includes more than 90GW of coal-fired capacity, which risks becoming stranded assets [13]. According to CAT, if India were to do away with its plans of building new coal-fired plants, its NDCs could become 1.5°C compatible. Further, despite the coal cess, subsidies for coal also remain high [14]. 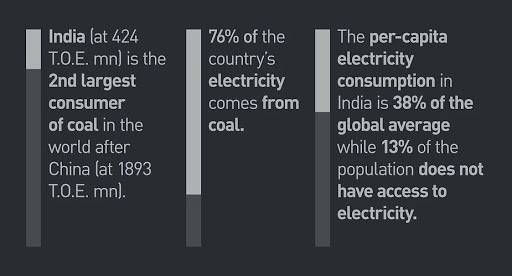 In 2017, coal generated 76% of the country’s electricity. The National Energy Policy (NEP) aims to achieve universal electrification with 24×7 electricity by 2022 [15]. Even with programmes like the Ujjwala Yojana, the per-capita electricity consumption by the country’s 1.3 billion people is just 38% of the global average, while 13% of India’s population does not yet have access to electricity [16]. More than half of the population still relies on traditional biomass like dung and wood for cooking. While this policy aims at curbing imports by increasing the production of renewable energy in the country to 300 billion units by 2019, it also aims at tripling coal production. Moreover, the National Clean Energy Fund (NCEF), which was created to fund innovation in clean energy so as to reduce India’s coal dependency, has ceased to function, with funds meant for it diverted to states to offset any losses resulting from the Goods and Services Tax (GST) [12].

Another area of concern remains the country’s NDC targets of afforestation and carbon sequestration. Forests absorb carbon dioxide and are, therefore, referred to as carbon sinks. India alone accounted for 7% of the global net increase in leaf area between 2000 and 2017 [9]. However, despite the fact that India has reported an increase in forest cover over the past decade, questions have been raised over the definition of ‘forest’ used in its BUR [11]. This may point to an overestimation of forest cover, which could assist in concealing ongoing deforestation. Additionally, data from India’s draft BUR shows that the carbon sequestration from forests has actually become worse between 2010 and 2014 [11]. It has also been suggested that community rights have been overlooked when it comes to forestry management. So, while CAT has projected that NDCs would reach its targets within the existing policy frameworks, Climate Scorecard, a US-based civil society coalition that monitors and ranks the climate action of leading greenhouse gas emitting countries, has awarded the lowest rating to India’s draft Forest Policy [17]. Concerns have been raised regarding the possibility of conflicts that may arise due to the subversion of the Forest Rights Act (FRA) and the involvement of the private sector in forest restoration. It is crucial for India not to overlook the important role that local and indigenous communities play towards climate change mitigation by maintaining the vast stretches of natural biodiversity rich forests. 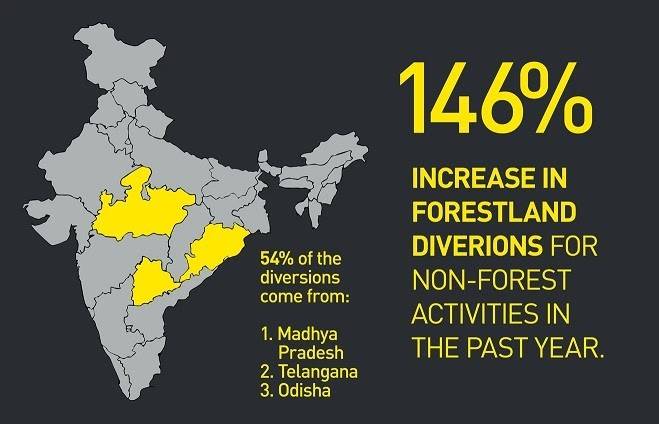 There has been a 146% increase in forestland diversion for non-forest activities in the past year. The maximum diversions were recorded in Madhya Pradesh, Telangana, and Odisha, which together accounted for 54% of the total diverted area [18]. The government’s move to make it easier to award wildlife clearances has also been questioned on the grounds that it may make protected wilderness areas vulnerable to corporate interests. Further, the Ministry of Environment, Forest and Climate Change (MoEF&CC) recently issued the draft Coastal Regulation Zone (CRZ) notification in 2018. This may open up India’s coasts to commercial interests, which could contribute to the destruction of the shoreline despite warnings about India’s rising sea levels posing a threat to coastal settlements [19].

The National Action Plan on Climate Change (NAPCC), released by the Ministry of Environment, Forest and Climate Change in 2008, is recognised as India’s official response to climate crisis through the creation of eight national missions in the specific areas of solar energy, energy efficiency, water, agriculture, Himalayan ecosystem, and sustainable habitat [20]. States have also prepared a State Action Plan on Climate Change (SAPCC) in-line with the objectives of the NAPCC. However, new schemes announced by the government to tackle climate change have not been integrated with the NAPCC. Moreover, the effectiveness of NAPCC and SAPCCs has been questioned due to issues regarding monitoring and budgetary support [20].

Despite proposing the National Clean Air Programme (NCAP), which aims to reduce 20-30% PM2.5 and PM10 concentration by 2024, the government failed to shed light on the budget allocated for the programme [21]. It also ended up cutting down the budget on pollution by 50%, and did not mention the issue of climate change in the interim budget [22]. Concurrently, India’s global climate agreements have not yet been comprehensively enacted into domestic legislation, and no law has been formulated in order to facilitate the realisation of the goals of the Paris Agreement. It has, therefore, been pointed out;

As global temperatures continue to rise, the cost of the climate crisis falls disproportionately on the poor. Droughts have severely affected agricultural productivity resulting in farmer suicides. Disasters have displaced 2.7 million people, and about 2 million displacements were associated with the monsoon [6]. According to a 2018 World Bank report, climate change could cost India 2.8% of GDP and depress the living standards of half the population by 2050, the reasons for which may be attributed to deteriorating agricultural yields and low labour productivity [23]. The country is also experiencing a rapid rise in the incidences of natural disasters, and the cost of damages are expected to touch $53.6 billion [24].

India has repeatedly emphasised the importance of equity and climate justice when it comes to negotiating global climate agreements, urging nations to consider the gap between developed and developing countries along with past emissions. However, it has been suggested that India plays a ‘dual role’ with regard to emissions, “as a minor contributor to past emissions, but a significant contributor to future emissions, albeit not on a per capita basis.” [25] The country has set ambitious targets to battle the climate crisis, however, as evidenced above, there needs to be better policy integration. 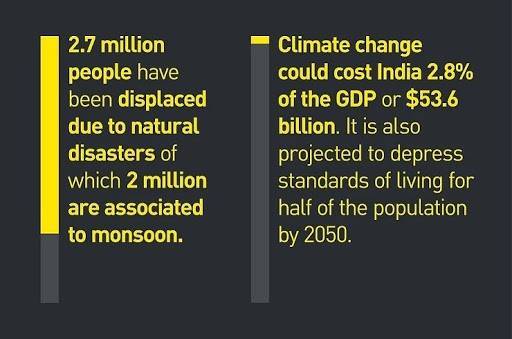 Section 12(1)(c) of the Right to Education Act: Challenges in Implementation and the Way Forward