In April 2014, in a landmark judgment in National Legal Services Authority (NALSA) v. Union of India and Others, the Supreme Court created the third gender status for transgender persons, recognising their legal and civil rights, and providing directives on affirmative action, access to public healthcare and other social welfare services. Though activists had pointed out the inherent ambiguity and contradictions in the NALSA judgment, including the conflation of various transgender identities, erasure of transmasculine individuals, and an ignorance of internal hierarchies of caste in its recommendation of blanket reservations, yet, it stands as one of the most significant legal interventions relating to transgender rights and self-identification [1].

Subsequently, a private member’s bill on transgender rights was passed in the upper house of parliament in April 2015.

Thereafter, the Transgender Persons (Protection of Rights) Bill, 2016, was made public, raising significant concerns from the transgender community over certain provisions, including the establishment of district screening committees, criminalisation of begging and sex-work, and a flawed understanding of transgender identity [2]. A parliamentary committee report disapproved of several provisions in the bill and called for significant improvements [3]. The bill was later passed in 2018 with 27 amendments, before lapsing with the dissolution of the house prior to the general elections in 2019.

In August 2019, the Transgender Persons (Protection of Rights) Bill was approved in Lok Sabha, the lower house of the parliament. The 2019 bill, despite diluting some of the contentious features of the earlier draft, has been deemed violative of the NALSA judgment and the right to self-perceived gender identity [4].

The bill aims to provide medical care facilities, including sex reassignment surgery and hormonal therapy, recommends reviewing medical curriculum to address health issues of transgender persons, and entails provisions for coverage of medical expenses by formulating insurance schemes. However, it has been pointed out that the bill contains ambiguous specifications relating to the right to self-identification [5]. Although doing away with the screening process, it requires for transgender persons to apply for a certificate from the district magistrate, which is expected to act as a proof of identity. It remains unclear whether a trans person who holds a male or female gender certificate will have access to government welfare schemes.

That the bill seeks to mandate sex reassignment surgery for transgender persons who wish to identify as male or female (along with documentation by a medical authority confirming it) highlights that it contravenes the NALSA judgment, much like the earlier draft. These provisions also violate international standards that call for the prohibition of medical and other barriers in the way of legal gender recognition, and ultimately assist in gatekeeping transgender identities [6]. It has been recommended that self-declared identification should form the basis for access to all social welfare measures.

Multiple media reports have uncovered the inherent bias and discrimination that persist in India’s healthcare system against the transgender community [7]. Accessing healthcare services remains traumatic for many such individuals, and the ignorance and neglect in the medical profession often compels many to self-medicate, or turn to alternative medicines and unlicensed doctors [8].

Although there exists an acute shortage of available data, according to the 2011 Census, nearly 5 lakh people in India identify as transgender [9]. It has, however, been estimated that the actual number may be significantly higher [10]. Moreover, owing to limited stable sources of income, many are unable to afford procedures such as sex reassignment surgery or hormone replacement therapy. While insurance coverage for transgender persons remains scarce, many private insurance companies consider sex realignment as a cosmetic surgery [11]. As a result, it has been reported that many male-to-female transgender persons undergo illegal castration by unqualified medics [7].

According to the National AIDS Control Organisation (NACO), HIV prevalence among the transgender population has been recorded to be at 7.5% [12], and the community remains highly vulnerable to mental health issues such as depression and substance dependence. HIV-positive transgender persons face additional layers of stigma and discrimination from healthcare providers. Given that the current medical curriculum fails to address transgender health, and along with the absence of any detailed national-level guideline for healthcare professionals, the lack of sensitisation among the medical community becomes a substantial barrier towards accessing healthcare [8]. 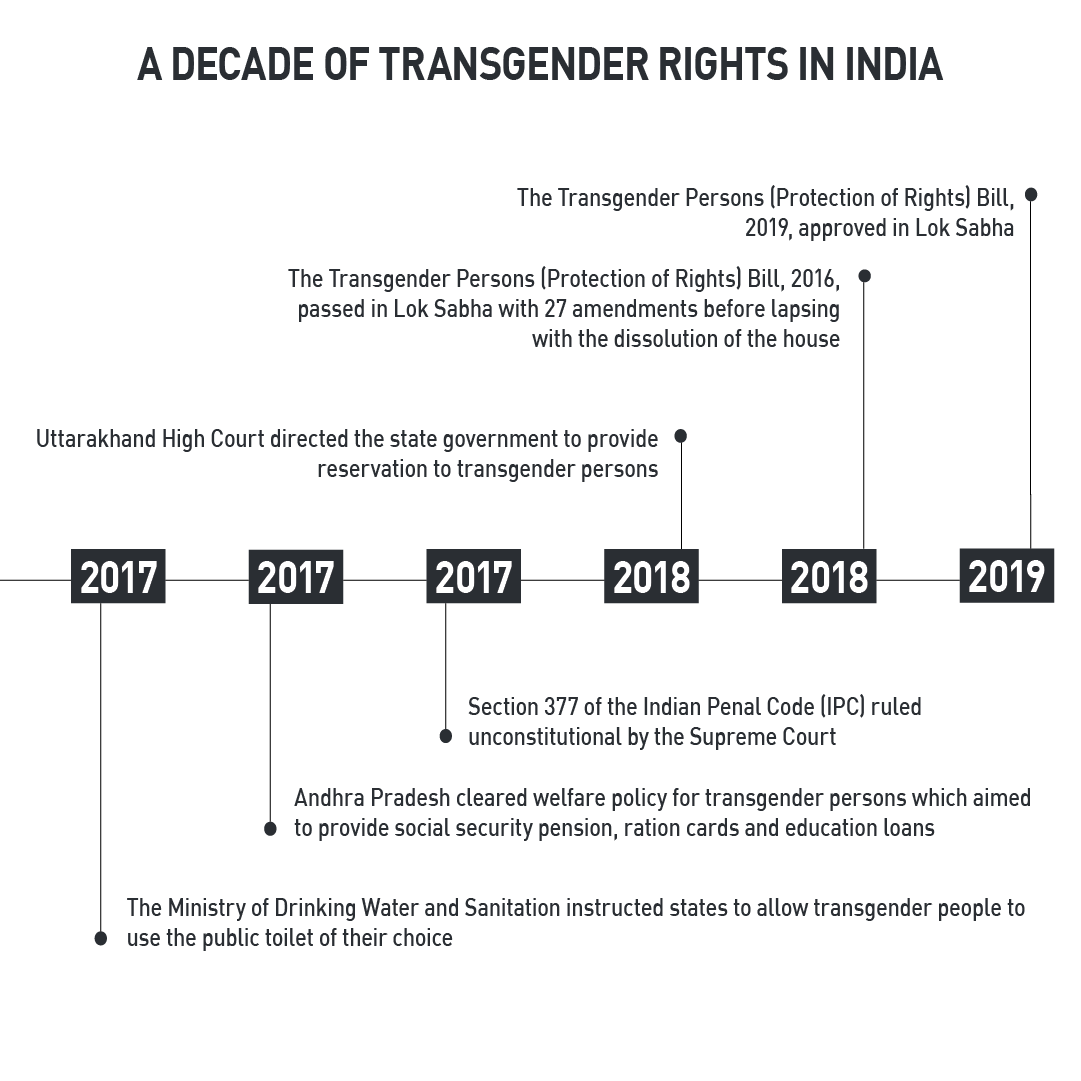 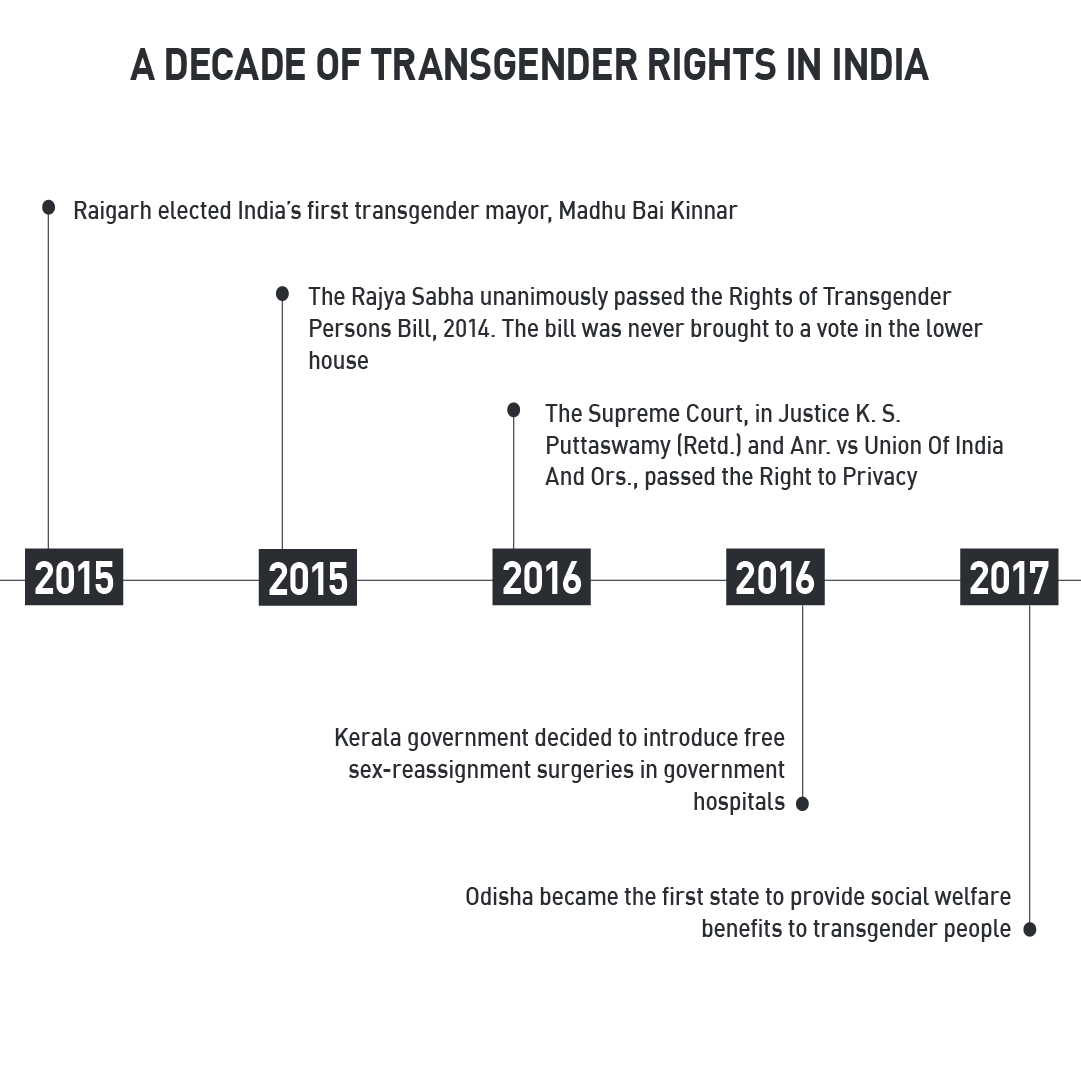 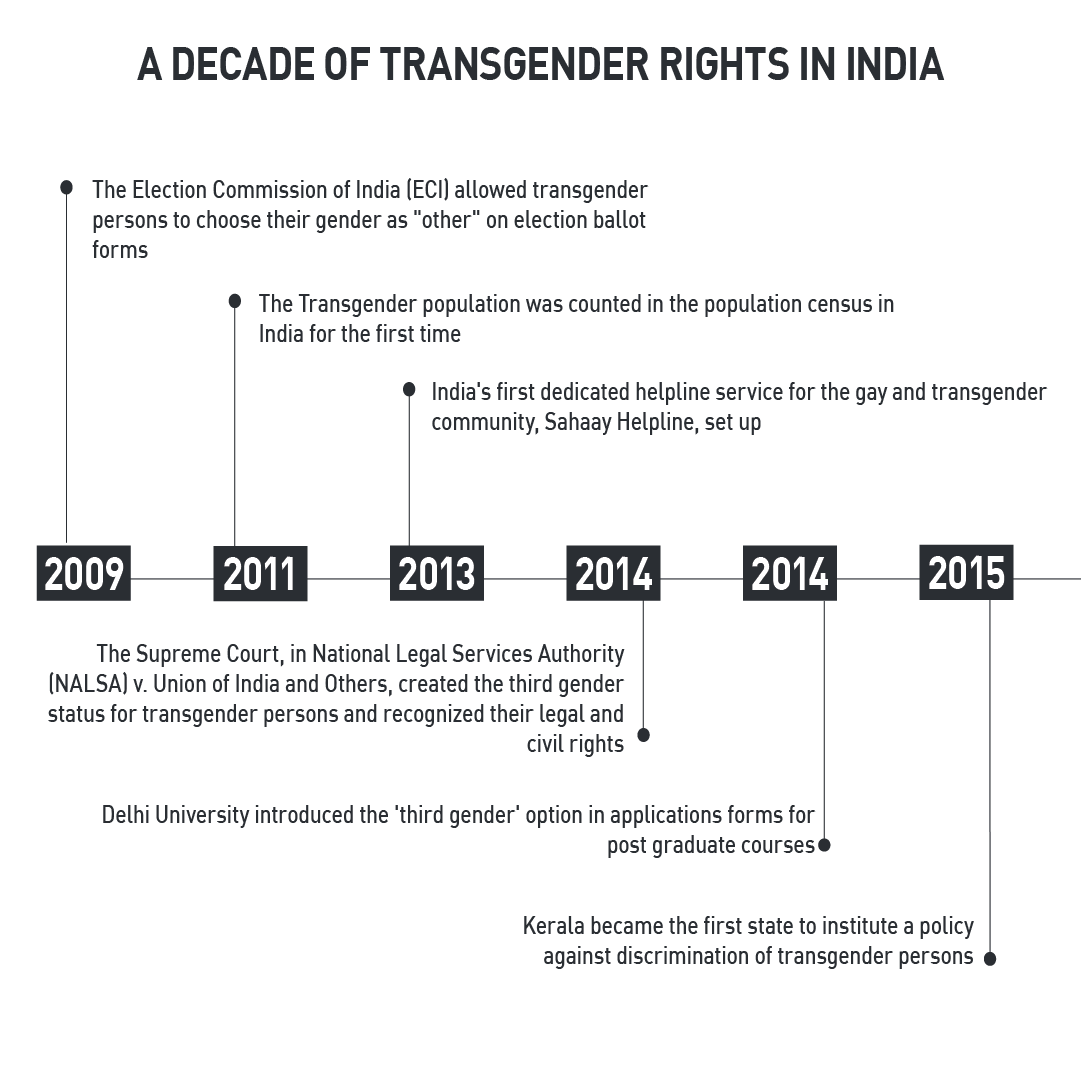 The earlier version of the bill had raised concerns owing to an inadequate understanding of transgender identity rooted in biological determinism. While the current bill manages to amend the definition of ‘transgender’, it conflates intersex persons with transgender people and, as stated earlier, fails to mention self-affirmation of gender [13]. Consequently, it manages to neglect various articulations of gendered expressions and complex lived realities.

According to Human Rights Watch, the bill should be renamed the Rights of Transgender and Intersex Persons Bill, along with providing explicit protection for intersex people, including the requirement of informed consent of intersex individuals before conducting non-emergency surgical procedures and prohibiting medically unnecessary procedures on children [4].

Scholars have illustrated how categories like ‘transgender’ and ‘hijras’ have often been deployed interchangeably [14]. Whereas hijra connotes a structured community of feminine identifying persons (which may include transfeminine individuals, kothis and women) with specific religious and linguistic practices, transgender serves as an umbrella category for a wide range of people on the gender spectrum who may not identify with the gender they were socialised in. Certain sociocultural identities, including shiv shakti and jogappas, have not found any mention in the bill, thereby illustrating how the regional specificities of transgender identities, together with transgender men and other transmasculine individuals, continue to be erased.

It has been argued that whereas some individuals become legible to the state as ‘authentic’ transgender subjects, those who fail to meet specific institutionalised criteria are often denied access to rights and welfare [15]. Typically, the working class and dalit sexual or gender variant communities are often invisibilised. Although the category of transgender may offer representation to those who fit official definitions, many non-binary possibilities and articulations of gender variance are not recognised. Notably, many gender or sexually variant individuals may represent themselves as transgender in order to be rendered intelligible to the state. As a result, defining the scope of transgender as a category for funding and representation has engendered conflicts and debates over classification amongst these communities. Terms like kothi have been particularly controversial due to their previous classification as MSM (men who have sex with men) – which was deemed as a sexual behavioural category. It has been pointed out that the state, in separating the funding of transgender groups from that of MSM, has negated the overlap between gender and sexual variance, thereby intensifying homo-trans boundaries [15]. The establishment of screening committees with the promise of welfare entail the risk of bolstering these identity disputes.

VIOLENCE AGAINST THE TRANSGENDER COMMUNITY

The bill prohibits discrimination against transgender individuals in the workplace, and mandates every establishment to designate a complaint officer in order to deal with matters related to the violation of provisions mentioned in it. As per a recent NHRC survey, sample data from Delhi and Uttar Pradesh reflected that 96% of the transgender population had been denied employment in the market [16]. However, by keeping only the small formal economy within its ambit, the bill fails to include vast segments of the informal economy where most transgender people, primarily from vulnerable castes, are employed. Many are employed in small factories or engage in badhai work, domestic labour and sex work. The discrimination faced by them in these work spaces, including low pay and sexual harassment, is therefore disregarded [14].

According to a study by the National Institute of Epidemiology, the greatest perpetrators of violence against transgender people remain the police and law enforcement officials [17]. Instances of police brutality, sexual assault, physical and verbal abuse and extortion against the community are not uncommon [18]. The bill, however, fails to address the distinct forms of oppression against people who identify as transgender. Additionally, it prescribes imprisonment of six months to two years against those who commit crimes against transgender persons. However, activists have pointed out that this term remains significantly lower than that prescribed for cases related to crimes committed against women and other marginalised communities. Sexual offences committed against women, for example, attracts a maximum sentence of life imprisonment [19].

Furthermore, the bill stays silent on inheritance rights, marriage and child adoption. It also makes no mention of any provision for reservation or affirmative action in employment, education and healthcare, thereby ignoring one of the key demands of the community.

Moreover, it does little to address government biases, by failing to keep public officials accountable so long as they act in ‘good faith’. This, it has been argued, further indicates an ignorance of the several instances of discrimination and harassment faced at the hands of state functionaries [18].

Transgender children are often abandoned by their family or routinely abused owing to their gender identity. The NHRC survey also pointed out that only 2% of transgender persons in India live with their families [16]. By necessitating that no transgender person be separated from their family and advocating for rehabilitation centers, the bill violates their right to live independently or with their adoptive family, and negates alternative kinship and community structures. This illustrates an inadequate understanding of the dynamics of violence within families and rehabilitation centers.

The previous iteration of the bill had been met with a large degree of public mobilisation by transgender activists in order to protest against some of its contested provisions. While clauses related to the criminalisation of begging – which carries with it the potential to be misused, as transgender persons are often targeted and subjected to harassment under the guise of begging prohibition laws in different states – and the establishment of a screening committee were later dropped, certain recommendations continue to entail potentially harmful implications for the community. Activists and members of the transgender community have managed to raise their concerns regarding the current version of the bill in online digital platforms and elsewhere [20] [21].

Additionally, it has been pointed out that any central legislation made to safeguard the rights of transgender persons must take place in consultation with members of the community. Disavowing the right to self-determination of gender and pathologising transgender identities remain violative of the country’s human rights obligations.

[3] The standing committee report called into question the bill’s definition of transgender people as “neither wholly female nor wholly male,” “a combination of female or male,” and “neither female nor male,” and noted its silence on penalties for those who violate the rights of transgender persons. The report can be accessed here: http://164.100.47.193/lsscommittee/Social%20Justice%20&%20Empowerment/16_Social_Justice_And_Empowerment_43.pdf