The most widely accepted definition of human trafficking across the globe can be found under Article 3(a) of The United Nations Protocol to Prevent, Suppress and Punish Trafficking in Persons, Especially Women and Children of 2000 (also called the “Palermo Protocol”) [1]. Simply put, it is the trade and transport of human beings for the purpose of exploitation and financial gains. Human Trafficking is one of the most gruesome offences that prevail in society and is escalating throughout the world. At present, it is estimated that trafficking in persons is the third-largest illegal industry in the world, after the trafficking of narcotics and arms [2]. Women and children, both from rural and urban areas, are the most common victims of human trafficking.

While the United Nations Office on Drugs and Crimes conducts research among countries for human trafficking, it does not rank countries in order of the seriousness of the problem. The United State Department Office to Monitor and Combat Trafficking in Persons publishes an annual Trafficking in Persons Report, where it ranks governments of various countries not on the size of the country’s problem but on the extent of its governments’ efforts to meet the TVPA’s minimum standards for the elimination of human trafficking, which are generally consistent with the Palermo Protocol.

The report divides nations into one of four tiers based on their compliance with standards outlined in the Trafficking Victims Protection Act (TVPA) of 2000 [3]. Tier rankings and narratives in the Trafficking in Persons Report reflect the following: laws relating to prohibition of human trafficking; implementation of human trafficking laws through various agencies; government funding and partnerships with NGOs to provide victims with access to primary health care, counselling, and shelter; victim protection efforts, etc. [4]

a) the absolute number of victims of severe forms of trafficking is very significant or is significantly increasing;

c) the determination that a country is making significant efforts to bring itself into compliance with minimum standards was based on commitments by the country to take additional       steps over the next year.

Tier 3 includes countries whose governments do not fully meet the TVPA’s minimum standards and are not making significant efforts to do so.

The Trafficking in Persons Report released in June 2019 stated that India does not fully meet the minimum standards for human trafficking elimination and hence, retained India in Tier 2 list [5] of countries, alongside Mexico, Nepal, Singapore, Turkey, U.A.E, Indonesia, and Jordan, among others. However, the Report does mention that India is making significant efforts for elimination of the same [6]. 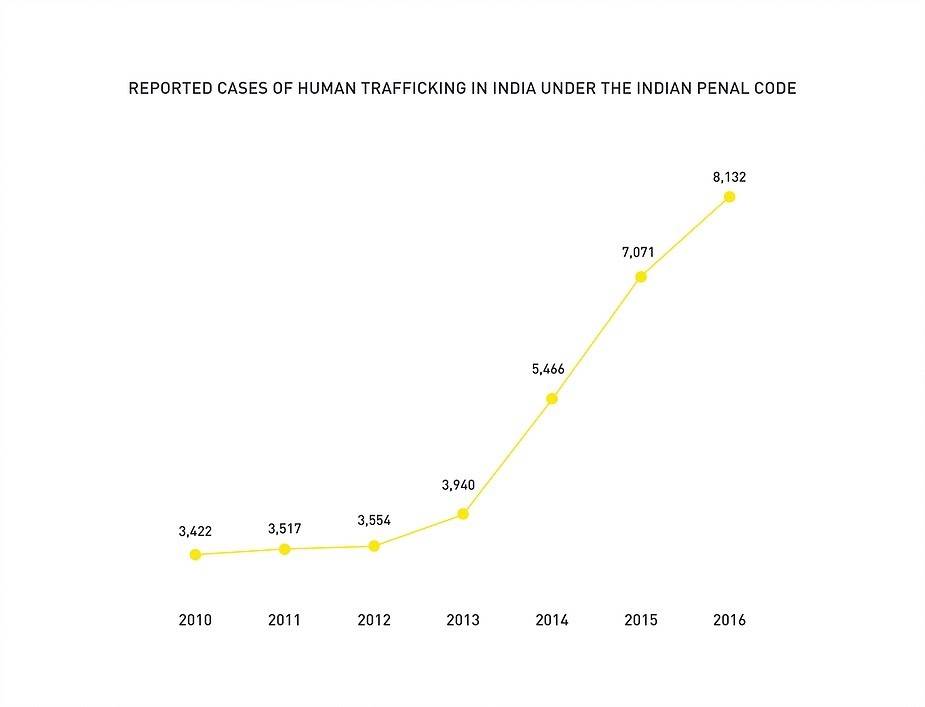 Precise figures at the global or even local level remain vague. Reliable data on trafficking is difficult to obtain, owing to its often invisible nature due to its illegality, the range and severity of trafficking activities, and variations on how trafficking is defined [7].

Currently in India, Human Trafficking is dealt with under various legislations. However, it is primarily Section 370 of the IPC which defines trafficking as (i) recruitment,

(ii) transportation, (iii) harbouring, (iv) transfer, or (v) receipt of a person for exploitation by use of certain forceful means. The Constitution of India prohibits human trafficking under Article 21 [11], 23 and 39 which unambiguously define the right of every citizen to live with dignity and freedom.

In conjunction, there are other specific laws which regulate trafficking for specific purposes. For instance, the Immoral Traffic (Prevention) Act, 1986 (ITPA) deals with trafficking for the purpose of commercial sexual exploitation, and does not recognise trafficking of persons for the purpose of physical and other forms of exploitation. Additionally, the Bonded Labour (Abolition) Act, 1976 and the Child Labour (Prohibition and Regulation Act), 1986 deal with exploitation for bonded labour. However, none of these legislations, except a few provisions of the Immoral Traffic (Prevention) Act, 1986 provide any relief or rehabilitation to the victims of the offence. The prosecution of crimes in human trafficking cases suffers from lack of evidence due to  absence of witnesses, victim protection mechanisms, as well as a lack of rehabilitation schemes.

It has been noted that legislations dealing with human trafficking need to be victim-centric rather than offender-centric. Therefore, to fill in the lacunae The Trafficking of Persons (Prevention, Protection and Rehabilitation) Bill, 2018 (hereafter referred to as the Bill) has been drafted [12].

Section 2(w) of the Bill defines trafficking as (i) recruitment, (ii) transportation,

(iii) harbouring, (iv) transfer, or (v) receipt of a person for exploitation, by using certain means.  These include the use of threat, force, abduction, fraud, deception, abuse of power or through inducement. Exploitation includes physical or sexual exploitation, slavery, or forced removal of organs.

For the first time in the Indian Legal System, the definition of “victim” has been provided under Section 2(x) of the Bill:  ‘A person or persons on whom trafficking of persons is caused or attempted by any other person or persons.’

Respective State Governments, in accordance with Section 7 of the Bill, will appoint a nodal officer to (a) combat trafficking in the state, (b) take follow up action under the Bill, (c) coordinate with other Government agencies and organisations, (d) provide relief and rehabilitation services in the state, and (e) coordinate and monitor inter-state and trans-border transfer of victims, witnesses, evidence, and offenders.

Sections 3 to 10 of Chapter II and III of the Bill deal with rescue and investigation. Section 3 of the Bill mandates the setting up of an anti-trafficking committee at the national level, which shall be responsible for: (a) ensuring relief and rehabilitation to victims, (b) seeking reports from appropriate authorities, (c) monitor the Rehabilitation Fund, (d) develop and monitor database of an offence committed under the Bill, (f) facilitate witness protection.

Further, the Bill mandates the setting up of various authorities at the district, state, and national levels for the rescue of victims and investigation of offences under the Bill. Section 10 of the Bill mandates the setting up of Anti-Trafficking Units at the district level, as well as  the appointment of anti-trafficking police officers for one or more districts, as deemed fit. Subsequently, authorities are required to close the investigation of the case within a period of 90 days, from the date of registration of the FIR. Furthermore, Section 31 of the Bill defines “aggravated” form of trafficking which includes (i) forced labour, (ii) bearing children, (iii) inducing early sexual maturity by administering chemical substances or hormones, or (iv) begging.  The punishment for aggravated trafficking is prescribed under Section 32 of the Bill. The punishment for aggravated forms of trafficking  is higher than simple trafficking.

Chapter IV and VII of the Bill deal with protection and rehabilitation facilities for victims and witnesses. The Bill mandates the setting up of Protection Homes [13]; providing shelter, food, counselling and medical services to the victims. These Rehabilitation Homes are to be maintained by the appropriate government, which may be the Central Government in Union Territories or the State Government [14].

The Anti-Trafficking Committee set up at the State level [16] shall be responsible for (a) arranging training and sensitisation of personnel, and (b) providing assistance and inputs for prevention of offences.

At the National Level [17], the anti-trafficking committee shall (a) ensure relief and rehabilitation to victims through concerned ministries and statutory bodies, (b) seek reports from appropriate authorities, and (c) monitor Rehabilitation Fund.

Further, the Bill ensures that the rehabilitation of victims will not be reliant on criminal proceedings being initiated against the accused, or the outcome of the proceedings [18].

While the Bill is a step forward to combat human trafficking, however, it also raises some concerns. The Bill uses vague language, which can lead to misuse and abuse of the Bill. The UN has raised concerns over these wide and ambiguous provisions which could penalise activities that are not necessarily connected to human trafficking.

For instance, the Bill criminalises “encouraging or abetting any person to migrate illegally into India, or Indians to some other country”. This provision mischaracterises the relationship between a smuggler and migrant by conflating trafficking with smuggling. This criminalises persons providing aid to migrants and ignores the reality that migrants often have to resort to irregular/illegal means of migration, which are contrary to the provisions of migration laws of the incoming country [19], such as a person who has entered into India on or after the 25th day of March, 1971 without valid documents, has entered into India without being in possession of a valid passport or other travel document or any other lawful authority in that behalf.

While the victims of the offence are provided with immunity, this immunity extends to only those crimes that are punishable with imprisonment of 10 years or more. Thus the Bill fails to provide immunity for a range of offences that don’t fall within this category.  Furthermore, while the Bill provides stringent punishments and penalties for various offences related to trafficking, it grades certain forms of trafficking as ‘aggravated’, which could trivialise forms of trafficking not considered ‘aggravated’. For example, trafficking for the purpose of bonded labour, begging and marriage or bearing a child have been categorised as ‘aggravated’. However, it leaves trafficking for purposes of sexual exploitation, slavery and practices similar to slavery and servitude out of its scope [21].

The Bill aims to set up  many agencies for the eradication of human trafficking. However, due to the establishment of multiple agencies, there can be many overlapping functions of various agencies. Setting up of such a complex network of bureaucracy can  lead to wastage of funds that could be better utilised for the welfare of victims.

Furthermore, if the State Committee is of the view that a victim needs to be deported to their country of origin, the prevailing laws shall apply on it [22]. But the problem here is that Indian laws treat such victims as foreigners, and there is no law to deal with migrants and refugees. Thus, the current provisions in the Bill will thereby lead to the extradition of the victims, adding to their vulnerability and also promoting clandestine movements within the country, thereby worsening rather than improving the condition of victims of trafficking [23].

Lastly, the Bill misses out on another important dimension of criminalisation and prosecution of the victims of trafficking. As this is a violation of the essential human rights of victims, their protection from double victimisation at the hands of the state is necessary [24]. Thus it is integral to protect victims of human trafficking from being prosecuted for crimes they may have potentially committed in the course of being trafficked. This forms one of the 3P principles of the UN Protocol [25]. This has also been provided in the United Nations Office of the High Commissioner for Human Rights (OHCHR) guidelines on trafficking. Number 7 of its Recommended Principles reads as follows [26]:

Trafficked persons shall not be detained, charged or prosecuted for the illegality of their entry into or residence in countries of transit and destination, or for their involvement in unlawful activities to the extent that such involvement is a direct consequence of their situation as trafficked persons.

Thus, keeping in mind the above, it will be more feasible to amend the current ITPA to address these concerns. Further, the amendment to ITPA will reduce overlap and will only make trafficking laws in India more comprehensive.

[3] TVPA defines “severe forms of trafficking in person as: a. sex trafficking in which commercial sex act included by force, fraud, or coercion, or in which the person induced to perform such an act has not attained 18 years of age; or b. the recruitment, harbouring, transportation, provision, or obtaining of a person for labour or services, through the use of force, fraud, or coercion for the purpose of subjection to involuntary servitude, peonage, debt bondage, or slavery.

[12] The Bill was cleared by the Lok Sabha on  July 26, 2018. However, it could not be passed in the Rajya Sabha. The Bill is slated to be re-introduced in the coming Lok Sabha Session.