In the months that followed its introduction in 2016, the Bill attempted to modify the nature of surrogacy for which India became ‘the surrogacy capital of the world’, shifting it from the domain of industrialised, formal mode work to one that promoted it only in the informal, private sphere. The surrogacy business, estimated at 400 million dollars a year, witnessed the emergence of over 3000 fertility clinics all over India. Juxtaposed against the Supreme Court’s legislation of 2002 that made all forms of surrogacy legal in India, the transforming social ramifications of assisted reproductive technology in the Indian context demands a critical investigation. 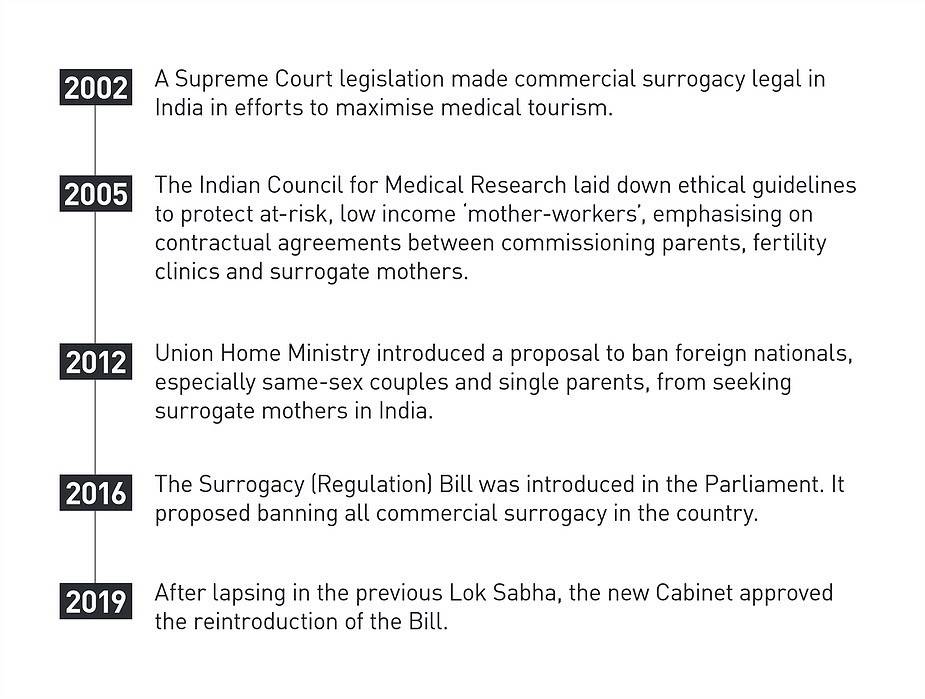 This 2002 legislation of the Supreme Court, in its endeavour to maximise medical tourism in India, assisted the emergence of an industry that attracted international attention to India’s reproductive market. Rapidly yielding profit, the industry amassed over a billion dollars, contributing to the growth of fertility clinics and ‘surrogate hostels’ all over India. The potential of cheap reproductive labour and heightened levels of financial indebtedness made low-income Indian women the perfect ‘sellers’ of their reproductive capabilities, and thus more vulnerable to exploitation by middlemen of fertility agencies and the international commissioning parents [1]. Yet, in the various case studies done by social scientists which studied the phenomenon of transnational surrogate mothers in India, it was revealed that these ‘mother-workers’ (a term coined by sociologist Amrita Pande [2]), derived more meaning and financial remuneration from working as surrogate mothers than from their seemingly ordinary working-class jobs [3]. To curb exploitative practices against these ‘mother-workers’, the Indian Council for Medical Research laid down ethical guidelines in 2005 which emphasised on contractual agreements between commissioning parents, fertility clinics, and the surrogate mother, as well as the notions of consent, privacy, and support [4]. An amendment was proposed to the 2002 law by the Union Home Ministry in 2012, banning foreign nationals, especially same-sex couples and single parents, from seeking surrogate mothers in India, in light of exploitation and unethical aspects that were associated with commercial surrogacy practices.

In 2016, the introduction of the Bill provisioned the establishment of national and state level surrogacy boards. Further, only heterosexual Indian couples, legally married for five years, could avail surrogacy, with a precondition of proven infertility certified by a recognised medical practitioner. In addition, a surrogate mother could only be a ‘close relative’ of one of the commissioning parents; she had to be between 25 to 35 years of age and had to have a child of her own. Banning all forms of commercial surrogacy, then, and deeming it ‘immoral’, this Bill recognised only ‘ethical’ altruistic surrogacy [5]. In this context, it is crucial to delve deeper into the nuances of this ‘ethical’ aspect of surrogacy, given the adversely patriarchal and heteronormative scenario prevalent in India. It assumes that altruistic surrogacies are inherently equitable in nature to all the stakeholders involved, disregarding exploitative practices against surrogate mothers, which may be entirely different from those emanating from commercial surrogacy arrangements. One of the many inconsistencies in this policy is the lack of a definition of a ‘close relative’. It remains unclear as to who constitutes a close relative, and whether she has to be a relative of the intended mother or intended father. Moreover, the social consequences of giving up a child, whose intended parents reside in the same family, could result in familial relationships becoming irreparably strained. Going through surrogate motherhood, thus, could be psychologically alienating, especially when a woman has been coerced by her family to carry a child to term. As such, refusal or abortion may become unachievable, owing to the power dynamics that characterise Indian society [6].

According to the 102nd Parliamentary Report submitted by the Standing Committee to the Rajya Sabha in 2017, the exploitative practices associated with commercial surrogacy by low-income women emerge from an absence of proper regulatory procedures and legal protection by the government, which fails to address this exploitation and instead attempts to eradicate the work itself [7]. The Committee also underlines the urgency with which surrogacy legislation in India require modification, with a focus on ‘compensated’ instead of ‘altruistic’ surrogacy, to ensure that the financial needs of the surrogate mother and her family are met. In addition, it argues that a ban on commercial surrogacy would only encourage its covert and underground practice, making it dangerous and life-threatening to surrogate mothers who rely on it due to their economic necessity. As such, the report emphasises on the protection of surrogate mothers as well as the child [8].

It may be suggested that the exploitative aspects of commercial surrogacy far outweigh its underpinnings in the reproductive choice of women. The points presented in favour of the Surrogacy (Regulation) Bill by its proponents included the elimination of third-party agents involved in the surrogacy process (clinics and fertility brokers) and the de-conceptualisation of surrogacy as a purely profit-oriented enterprise. The legal hassles of determining the citizenship of the surrogate child also contributed to the support for the Bill, in light of the cases of Baby Manji (2008) and twins born to Jan Balaz (2008) [9]. Radical feminist perspectives have also attributed instances of trafficking of women to the evils of cross-border surrogacy practices. Contesting the notions of the commodification of women’s reproductive capabilities, which further set in stone their potential for exploitation, these inclinations question the disposability of surrogate mothers post the process of gestation. This concentrates their value in society to the viability of their wombs, and their potential to ‘manufacture’ babies, which bolsters existing patriarchal ideals [10].

Further, the heteronormative narrative of the Bill must be questioned, especially by pitting it against the striking down of Article 377 of the Indian Constitution by the Supreme Court in September 2018, which decriminalised consensual sexual relations between two adults of any sexuality. In this context, the Bill denies the rights of homosexual couples to commission a child and refuses to acknowledge these couples as ‘legitimate’. Reinforcing traditional ideals of the family in Indian society, the Bill strips away any hopes for legal parenthood held onto by the LGBTQIA community in India, as the legal framework for adoption practices also excludes gay, lesbian, and transgender parents [11]. It curtails access to parenthood, thereby cementing oppressive norms which refute their capability as parents, thus submitting to an already institutionalised exclusion.

The constitutional validity of the Surrogacy (Regulation) Bill requires a profound critique in order to evaluate its social implications in the Indian setup. By limiting the eligibility criteria for potential parents, the Bill allows only for commissioning couples to seek surrogate mothers in the same caste, in an effort to maintain their caste purity. In addition, India’s patriarchal structure attaches notions of femininity and womanhood to motherhood, the glorification of which becomes central to preserving its sanctity, and which is further rooted in the ideologies that govern the choice of surrogate mothers [12]. Brahmanical patriarchy (a term coined by historian and feminist scholar Uma Chakravarti that demonstrates a culturally produced link between the upper caste hegemony over the sexuality of women and their reproductive labour), in this way, shapes access to parenthood, which is predetermined by notions of caste purity and family lineage and omits the experiences of Dalit women who bear ‘illegitimate’ children of upper caste men. Therefore, the restrictions imposed on surrogacy in India highlight patterns of caste hierarchy and savarna motherhood [13].

A comprehensive evaluation of the current trends of surrogacy practices must include gaps that emerge in the conceptualisation of the Bill, such as its violation of the ‘Right to Reproductive Autonomy’ under Article 21 of the Indian Constitution, which upholds a woman’s Fundamental Right to make reproductive choices. It further violates Article 19(1)(g), which protects ‘Freedom of Trade and Profession’ [14]. In this view, the Bill is unsuccessful in maintaining a balance between regulations and rights, demonstrating a process of legislation that is devoid of know-how to integrate the two effectively.

[5] The various types of surrogacy recognised by the Indian state and prevalent in the world can be primarily of two types: commercial and altruistic. The former entails a monetary compensation to which the surrogate mother is entitled, which is often pre-determined, thus being intensively contractual. The latter, on the other hand, defines a practice wherein the surrogate mother (usually a close relative or acquaintance) agrees to pregnancy for the sake of the commissioning parents, without any promise of financial compensation for her reproductive labour.