India’s 94th rank in the 2020 Global Hunger Index (2021) out of 107 reflects the rampant undernourishment in the country. While the economy has witnessed rapid growth in the past decades, improvements in nutrition status have been relatively steady, and hence, the need for substantial breakthroughs remains. A critical aspect of this public health challenge is the anaemia burden on women in India, recording one of the world’s highest.

Although there are several causes of anaemia, foremost is iron deficiency, followed by deficiencies in folate, vitamin B12, and vitamin A (World Health Organisation n.d.). In the last two decades, anaemia’s prevalence among Indian women of reproductive age, on average, has been 20% more than the world average. While one in three women in the world is anaemic, one in two women is anaemic in India.

Figure 1: Prevalence of anaemia among women of reproductive age (% of women ages 15-49)

According to the National Family Health Survey 2015-2016 [NFHS-4] data, approximately half of total women in India suffer from anaemia of some kind (mild, moderate, or severe), which is not a significant improvement from the NFHS-3 [2005-6] findings (Ministry of Health and Family Welfare [MoHFW] 2017). While severe and moderate anaemia have seen a fall, cases in mild anaemia have increased. Such a condition can have serious physical, social, and economic consequences as it leads to fatigue, stress, and diminished productivity. Chronic anaemia can also lead to cardiac failure and death (Bharati et al., 2008: 348). 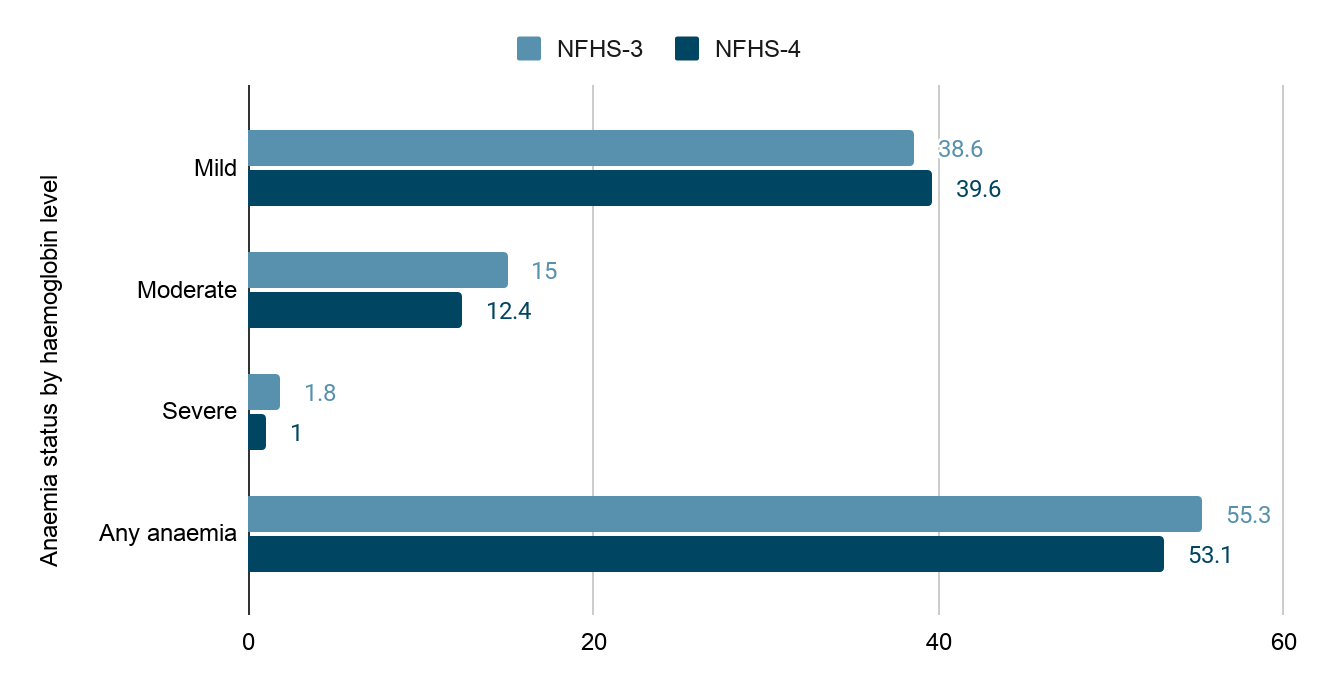 During pregnancy, a woman needs an extra intake of 15mg of iron per day to support herself and the baby, the lack of which increases the risk of maternal mortality (Ministry of Women and Child Development 2018). India does not perform well in maternal health and birth weight of newborns as well. While half of all global maternal deaths due to anaemia occur in Southeast Asia, 80% of them happen in India (National Health Portal n.d.). A study by Gnanasekaran et al. (2019) found that maternal anaemia is positively correlated with low birth weight babies as 85% of low birth weight babies were born to anaemic mothers.
Read More
Tagged with: GovernanceHuman Rights

Why Gender Matters: Climate Change and Agriculture in India

A Year After ‘Nari Shakti’: Reviewing Permanent Commission for Women in the Army