THE NEED FOR PRISON EDUCATION

Studies across the world have indicated that education during incarceration has long term benefits for entire societies. In fact, a report in the USA suggested that individuals who participated in any form of educational programmes in prison were 43% less likely to return to jail [1]. This is mostly because, among other factors, prison education has shown to have significant personal benefits in the form of higher chances of employment post release, greater political engagement and volunteerism, and improved health outcomes. On the other hand, ex-convicts who have low levels of education are often unable to find work or social support systems, thus increasing their chances of committing crimes and reentering the prison system [2].

Higher recidivism affects the entire population of a country because it diverts money and resources to the criminal justice system that could instead be spent on other community reform policies. Increased criminality also has intergenerational effects, with children of prisoners being more likely to have unstable family systems, lower economic resources, higher tendency of delinquent behaviour and eventually turning into criminals themselves. Investing on prison education, therefore, has a significantly high return value, and ultimately saves taxpayers’ money [3] [4].

Unfortunately, it is difficult to come across related studies in India, simply because prison education itself is an overlooked issue in the country’s justice system. While one can assume that similar results can be expected from educating India’s prisoners, there is very little actual evidence to support this claim. Regardless, it is pertinent to note that prisoners in India are overwhelmingly either illiterate or hardly educated (figure below) [5]. Low education not only leads to lower incomes and higher chances of unavoidable criminal activity, but it also directly corresponds to low legal literacy, which means that a large number of India’s prisoners were never aware of the country’s laws. It also means that a smaller percentage of prisoners actually know their rights or have access to efficient legal services to defend their case [6]. 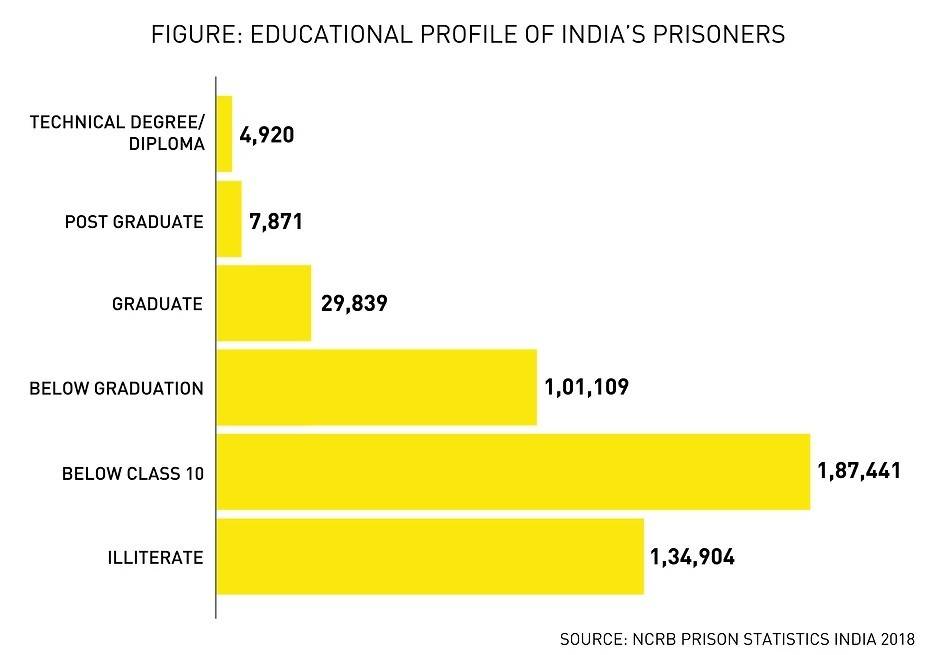 The need for prison reform in modern India was first highlighted by Lord Thomas Macaulay, who addressed in the Legislative Council of India in 1835 about the deplorable conditions in Indian prisons. He called the practices taking place inside the prisons to be “shocking to humanity” [7]. Based on his recommendations, the Prison Discipline Committee was established in 1836, soon after followed by the Jail Manual and Discipline (1864) and the Calcutta Conference (1877). These committees suggested the abolition of the backbreaking outdoor labour that prisoners were made to do while incarcerated. Although the conversation had not yet focused on the need to educate and rehabilitate prisoners, some of the groundwork for this was established [8].

When the discourse on punishment shifted from a punitive to a more reformative approach in the early 20th Century, the Indian Jail Committee Report 1919-20 proposed vocational training and work programmes as a possible and more rehabilitative alternative to the hard labour that prisoners were forced to do. However, as Criminologists Vijay Raghavan and Vineetha S highlight, vocational training and work programmes remained conceptually interchangeable, and prisoners continued to work during their term, a practice often defended as “on the job training” [9].

In subsequent decades, scholars and activists began to advocate for educational facilities to be made available within the confines of the prison, in the form of libraries, educational courses, and so on. Many such programmes were started, reportedly, in prisons around independent India, with a focus on skill building and overall personality development of convicts so that they can successfully reintegrate into society post release. However, In 1983, Qaiser Hayat extensively studied the general and vocational education available at the time and came to the conclusion that prison education in India remains largely neglected. There were no modern programmes of vocational training, inadequate library facilities, and a noted lack of trained instructors and separate classrooms. Other barriers to improving educational programmes in prison existed in the form of negative attitudes of fellow prisoners towards those involved in these programmes [10]. Almost 40 years later, the little that is known about the state of prison education in India suggests that it continues to be a neglected issue.

EXISTING EDUCATIONAL AND VOCATIONAL TRAINING PROGRAMMES AND THEIR IMPACT

In 2003, the Model Prison Manual emphatically attested to the need for providing educational facilities to prisoners, stating that, “Education is vital for the overall development of prisoners…it leads to their rehabilitation and self-sufficiency…It is a tool by which the knowledge, character and behaviour of the inmate can be moulded. It helps a prisoner to adjust to the social environment and his ultimate resettlement in society.” [11]. Similarly, the National Human Rights Commission, in their annual report of 2004-05 issued broad guidelines stating that prisoners must have access to reading materials and other educational facilities to nurture their skills and overall personality development. It stated that every prison should maintain a library that is commensurate to the number of prisoners housed, with special attention being paid to the development of suitable recreational and educational materials for women prisoners or for those who may be young or illiterate. The report also highlighted the need to curate educational programmes based on the educational and cultural background of the inmates. Finally, it stated that “In assessing the content of reading materials, the Superintendent of the Jail should be guided by law; he should not exercise his discretion arbitrarily” [12].

Despite these and other recommendations by international bodies such as the UN, there is very little information available about whether educational programmes are available to prisoners and their nature. Although the National Crime Records Bureau releases data in its annual reports about the number of inmates who benefited from educational and vocational training programmes that year, there is no information about the metrics used to determine these benefits. Moreover, the numbers are also quite low, with the 2018 Prison Statistics India stating that out of a total 466,084 prisoners in India, less than 25% received education and only about 11% received vocational training (Tables 1 and 2) [13]. While there are CSOs and NGOs that are working on the issue of prison reform through education today, these programmes are largely sporadic in nature [14] [15].

Furthermore, the vocational training offered to inmates is rarely beneficial to them after release, with limited job prospects and earning potential in those respective fields. While the 2003 Model Prison Manual suggested that vocational courses be upgraded on a regular basis, studies have shown that this has very rarely been the case. Teachers are often untrained and low-paid, tools and equipment are unavailable, raw materials are short, and the resulting goods produced are therefore substandard, further resulting in lack of interest or motivation among inmates. Moreover, inmates are often assigned to particular courses based on availability of seats with no regard to their aptitude or interests. Payment for their labour, which aims to bring dignity and value to work as well as equip prisoners with some monetary support post release, is often below minimum wage [16].

Vocational training programmes in Indian prisons, therefore, present as rather punitive than reformative upon close analysis. The lack of individual agency to pick a program, the denial of choice on whether to work at all, and the meagre wages, suggest that the current programmes are tokenistic, existing only to meet certain government guidelines rather than for the interest of prisoners [17].

It is evident that prison education in India is an institutionalised insufficiency – it is hardly mandated and regulated in policy, and finds even less importance in practice. Prisoners face systemic barriers in reintegrating back to society, thus continuing the cycle of incarceration. Very few studies exist to assess the nature of existing programmes and their outcomes. The same taboos and stereotypes that prejudice the general population against convicts and ex-convicts also prevent prisoners from finding opportunities for rehabilitation, as the government as well as civil society rarely invest in their education and upskilling. The programmes that do exist are scattered and small in scale.

It is imperative, therefore, to prioritise prison education in policy, evaluate existing programmes for efficiency, as well as scale them up to be availed by each and every inmate in the country. A programme similar to the Sarva Shiksha Abhiyan or the National Adult Education Programme, or a statutory body like the UGC can bring education in prisons under their umbrella so that the curriculum that is followed has real world advantage for inmates. Similarly, vocational training should be effective and provide skills that are beneficial in the world outside prisons. Both educational and vocational training programmes should be designed keeping in mind the different levels and kinds of education, cultural backgrounds, interests, ages, genders, and abilities of inmates. Inmates should be able to choose which programmes to be a part of, and paid adequate wages for their labour. It is only when prisoners are given the tools necessary to reintegrate into society after their incarceration is over, can a prison system be truly reformative in practice.

Vocational Education in the NEP 2020: Opportunities and Challenges