The Indian government, as part of its efforts to revamp forest conservation and management, announced two new changes to India’s forest policies in 2018 and 2019. The first of these, the Draft National Forest Policy (NFP) 2018, has been under review since it was first made public in March 2018, and seeks to replace the 30-year old NFP 1988 and aims to take into account present realities of climate change along with the development of mitigation strategies [1]. The second, the Draft Amendment to Indian Forest Act (IFA) 1927, first circulated in March 2019, was aimed at providing for conservation, enrichment and sustainable management of forest resources, safeguarding ecological stability, and addressing the concerns related to climate change. Interestingly, the draft amendment was withdrawn by the government in November 2019 after facing criticism over its approach towards the rights of forest-dwelling communities [2].

To set the context of the forest scenario in India, some recent data is necessary. The country was ranked 10th in the world in terms of forest area in 2015 with 22% land classified as forest area while the India State of Forest Report (ISFR) 2017 stated that it had 24.4% of land area under forest and tree cover [3]. It is important to note that the term ‘forest area’ is a legal term referring to land recorded as forests in various government records while the term ‘forest cover’ refers to all lands more than one hectare in area, with a tree canopy density of more than 10 percent irrespective of ownership and legal status [4]. Such lands may not necessarily be under recorded forest area. Hence, while forest area indicates the legal status of a piece of land, forest cover simply indicates the presence of trees. Distinct from the two, ‘tree cover’ refers to all tree patches with size less than one hectare outside the recorded forest area. However, different organisations may define ‘tree cover’ differently. The Global Forest Resource Assessment (GFRA) published by the FAO once every five years uses the term ‘forest area’ to benchmark countries for total forest area and change in forest area recorded. India was ranked 10th overall as per the 2015 GFRA in terms of total forest area, as reported above. As per data from Global Forest Watch, India lost a total of 1.67 million hectares (Mha) tree cover [5] during 2001-2018, with the trend in tree cover loss increasing during the last five years (see figure below) [6]. Other reports suggest that 30% of India’s land suffers from degradation [7]. 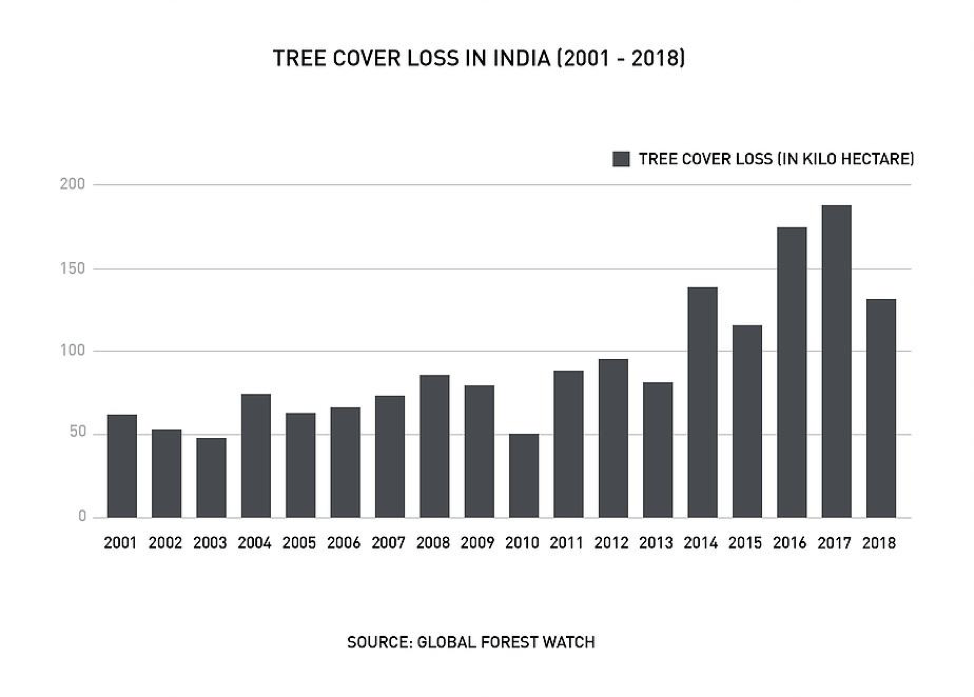 In this context, the two draft policies gathered different strands of opinions. The NFP draft has been praised for taking into account the reality of climate change by integrating mechanisms of REDD+ (Reducing Emissions from Deforestation and Forest Degradation plus). More importantly, it has provisions for afforestation programmes to restore degraded land through public-private partnership models [11]. However, environmentalists and activists have highlighted the “industrial” nature of the draft and how it is a direct violation of the Forest Rights Act (FRA) 2006. The FRA was passed to recognize occupancy rights and the use of forest produce as a source of livelihood entitlements by forest dwelling/dependent people [12]. Activists have claimed that the draft policy seeks to seize the powers of the gram sabhas under the PESA Act of 1996 [13] and the FRA i.e. control over the community forest resources by launching a National Community Forest Management Mission [14]. With regard to the draft amendment, the empowerment of bureaucracy under it was questioned that granted forest officers greater immunity and undermined people-centric forest regimes mentioned in FRA 2006. The amendment also retained the provision to punish entire communities by denying access to forests for offences committed by individual members [15]. This drastic change in approach towards forest dwelling communities and subsequent criticism could have been the reasons as to why the government withdrew the draft amendment later.

A major part of any forest policy is the process of granting environmental clearances. For this purpose, Environment Impact Assessment (EIA) Notification has been governing the clearance process in India since 1994. In April 2019, a zero draft was released by the Ministry of Forest, Environment and Climate Change to make changes in the EIA 2006 notification. It aims to streamline the process and reduce the duration of clearances to push through the government’s development agenda. However, the changes also highlight the weakened process of granting environmental clearance. A report by the Centre for Science and Environment (CSE) underlines that exemptions have been provided in the public consultation process which is otherwise mandatory in almost all projects [16].

One of the changes observed in the approach towards forest policy is that “unlike previous policies, which stressed on environmental stability and maintenance of ecological balance, the 2018 policy focuses on the international challenge of climate change” [17]. Under the Paris Agreement, one of the three goals that India committed itself to was to create an additional ‘carbon sink’ through increase in forest and tree cover by 2030 [18].  However, given past trends and available data, it seems that India is moving further away from achieving this goal. The Green India Mission (GIM), one of the eight missions launched under the National Action Plan on Climate Change with the stated goal of enhancing India’s diminishing forest cover, reportedly fell short by 34% of its plantation target [19]. As per a Parliamentary Committee report released in December 2018, the mission has been grossly underfunded and aimed at increasing tree cover without considering local soil and weather conditions [20]. The report also found that the plantation target stated under GIM is insufficient to sequester 2.5 billion tonnes of carbon by 2030 as per India’s Nationally Determined Contribution (NDC) submitted to the UNFCCC.

The government claims that “amending the colonial forest laws would help improve forest governance, and meet developmental aspirations and international commitments” [20]. As recently as September 2019, as part of the United Nations Convention to Combat Desertification Conference of Parties (COP 14) held in New Delhi, India revised its land restoration target from 21 million hectares to 26 million hectares by 2030, albeit without a roadmap for meeting this target [22]. Most assessments, as opposed to the government claims, observed that the draft policies entailed a virtual repeat of the colonial act of 1927 with the only change being that they take away more powers from forest dwelling communities and empower the Central and State governments [23].

Two key issues need to be addressed here. First, the cost incurred by people dependent on forests for livelihood sustenance due to the change in policies and second, whether there is space for differing perspectives within the government’s plan to prioritize development aspirations.

Notwithstanding the withdrawal of the draft amendment to the IFA 1927 by the government, whether or not the two drafts reflect a change in the nature of forest policies in India can only be judged in the near future when India moves closer to meeting its SDG commitments by 2030 in light of substantive data. Meanwhile, India stood at the bottom five, ranking 177th out of 180 countries in the latest Environmental Performance Index 2018. As stated in the index, “low scores on the EPI are indicative of the need for national sustainability efforts on a number of fronts, especially cleaning up air quality, protecting biodiversity, and reducing GHG emissions” [24].