India’s Agricultural Trade and its Impact on the Environment 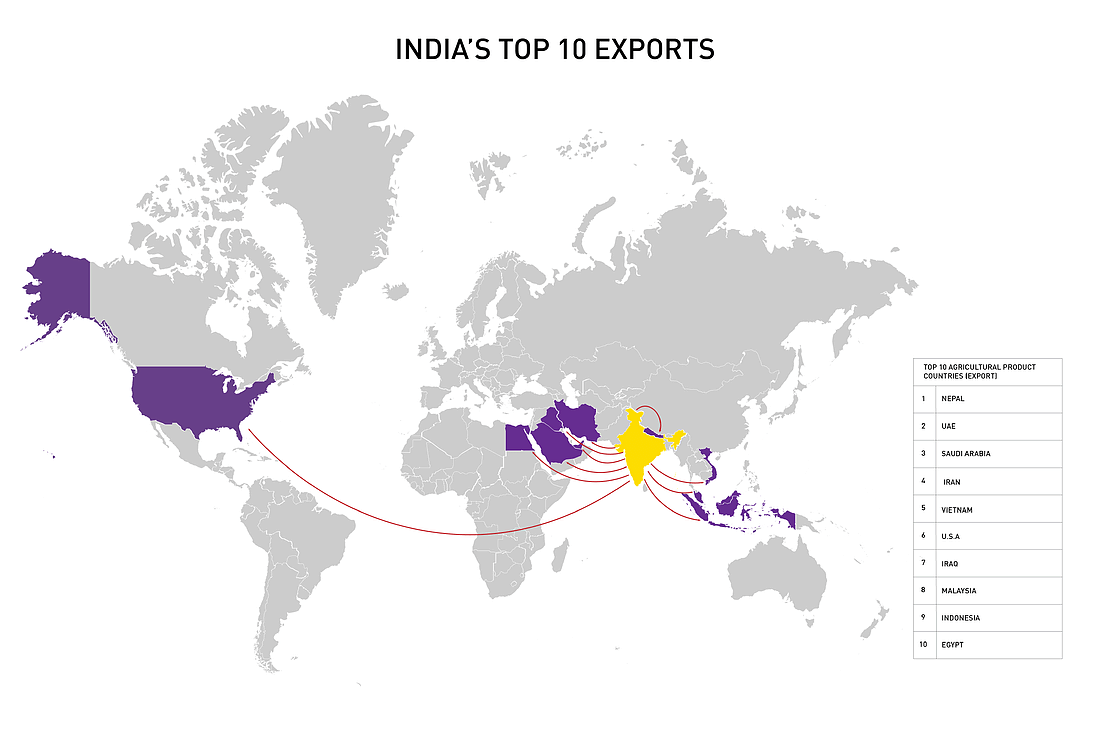 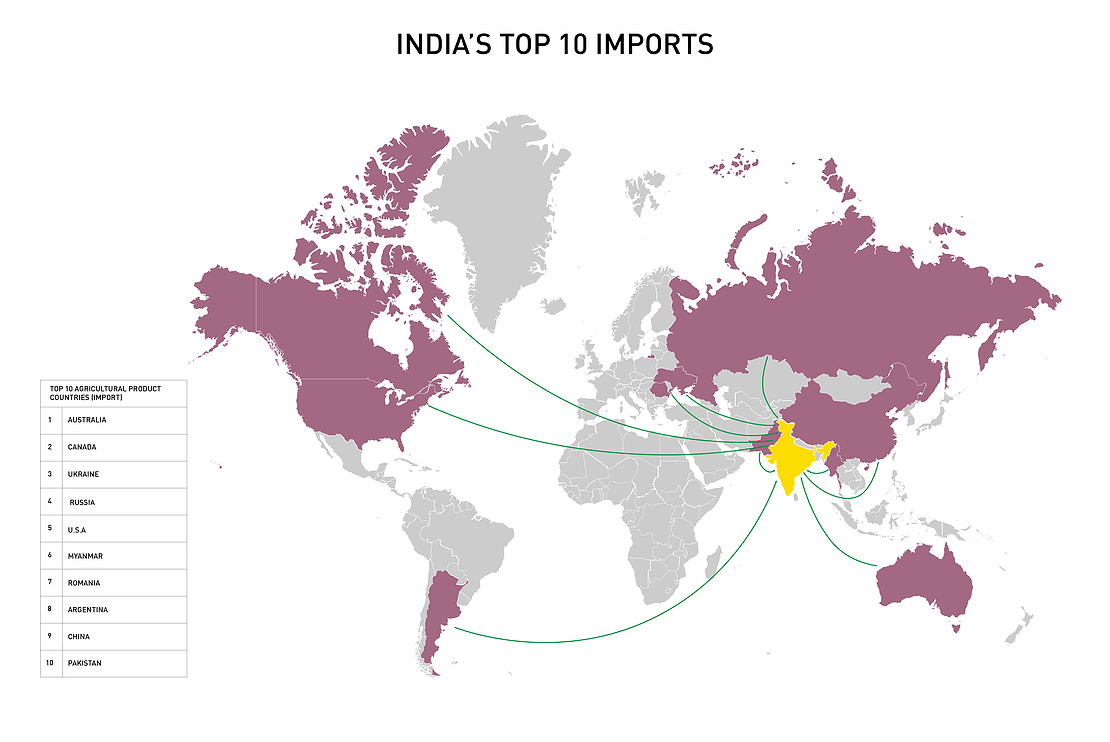 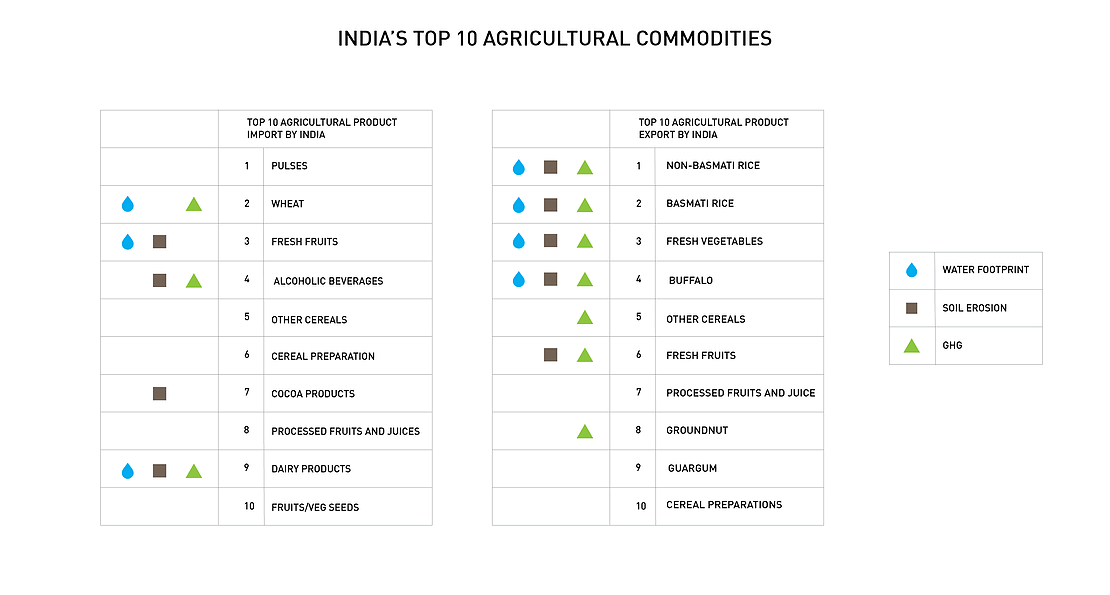 India is primarily an agrarian economy and has the 10th largest arable land resources in the world. Its varied climate and the agrarian culture have contributed significantly to the global food basket and India is currently among the 15 leading exporters of agricultural products in the world. Agricultural export is one of the major sources of farmers income. The sector employs nearly half of the Indian population accounting for 43.2% [1] of the total employment and contributing 14.6% to the country’s GDP [2].

This analysis is based on the export and import of agricultural commodities for the past four years (2016 – 2019) and its implications on the environment. The repercussions are understood in terms of the water footprint, soil erosion and greenhouse gas emissions. The data has been collected from Arjen Hoekstra’s studies. The ranking draws on the quantity (in Kgs) exported and imported.

Being one of the top agricultural exporters has significant effects on the environment and has raised sustainability issues. The production is resource-intensive and region focused. There is increasing stress on water resources as almost 89% of extracted groundwater is used for irrigation [4]. In many parts of the country, power subsidies have resulted in the farmers drawing out groundwater in excess which has led to a decline in the water table, thus contributing to environmental degradation.

Furthermore, the overuse of fertilisers has led to the depletion of soil micronutrients with adverse consequences for soil fertility [5] and groundwater pollution. Excess use of nitrogen and phosphates [6] has led to leaching in the groundwater, severely affecting the quality of water. Additionally, regular ploughing has a significant effect on soil quality and structure.

The top 4 export products from India contribute majorly to the degradation of the environment in all three categories – water, soil and greenhouse gases.

In 2018-2019, the production of horticulture crops was estimated to be 313.9 million metric tonnes (MMT), as per the third advance estimates [7]. India ranks second in global production of fruits and vegetables. In terms of volume (quantity in Kgs), India’s top export destination is Nepal and it can be inferred from the map that India exports majorly to developing nations. There are 8 developing countries in India’s top 10 export list, four of them being in the Middle East region– Nepal, Saudi Arabia, Iran, Vietnam, Iraq, Malaysia, Indonesia and Egypt. Whereas, in terms of import, there is no specific region where India mostly trades from.

The products imported by India also have major adverse effects on the global environment. Production of dairy products degrade local water resources and lead to the loss of forests and wetlands [8]. Fresh fruit production also has significant effects on the health of water and soil [9]. Alcoholic beverages require various crops such as wheat and grapes which majorly impact the environment by releasing greenhouse gases and deteriorating soil quality. Similarly, the production of wheat emits large amounts of greenhouse gases such as Methane (CH4).

In 2011 the world agricultural sector ranked the second highest in GHG production with farms releasing 24% of total global emissions. The amount of atmospheric methane reached 1,853 parts per billion in 2016 – about 60% came from the agricultural sector, especially rice production [10]. Methane is an 84 times more potent greenhouse gas than Carbon Dioxide as it absorbs heat more effectively. [11]. The overall agriculture emissions from India contributed to 1.44% of global emissions in 2017 [12].