A Question of Citizenship: The Case of the Chakma-Hajong Refugees

The Chakma and the Hajong refugees have been inhabitants of the Indian state of Arunachal Pradesh for over 50 years now. Despite their coexistence for several decades, the indigenous communities of the state still consider them to be ‘outsiders’. The recent Supreme Court judgement [1] of granting citizenship to these refugee groups, in consonance with The Citizenship (Amendment) Bill, 2016, has created a upstir in the region.

The Chakmas and the Hajongs were originally residents of the Chittagong Hill Tracts of East Pakistan (now Bangladesh). The construction of the Kaptai Hydroelectric Dam on the Karnaphuli river resulted in their large scale displacement. This, coupled with massive religious persecution forced them to migrate to India from East Pakistan. They entered India in the early 1960s through the Lushai Hills district (present-day Mizoram).

The Central government of India gave settlement areas to the Chakma-Hajong population in the Tirap division of North-East Frontier Agency (NEFA) (now part of Arunachal Pradesh) in order to avoid any conflict with the indigenous population of Mizoram.

Since then, a shift in the political status of Arunachal Pradesh, and the continuing rise of the Chakma-Hajong population, has led to a growing sense of resentment among the indigenous population. 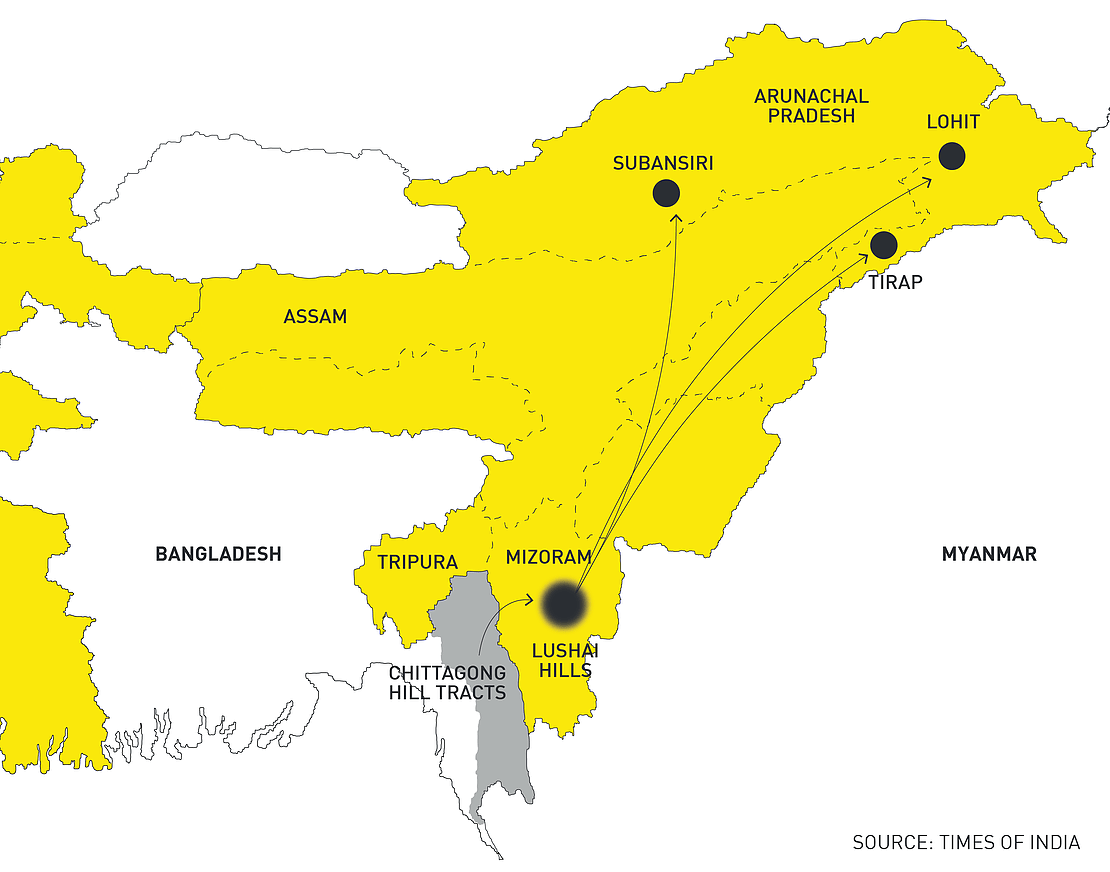 Opposition against the Settlement of Refugees in Arunachal Pradesh

The NEFA region was initially without any elected government or representatives. It was only after the NEFA was made a Union Territory in 1972 that several political parties emerged. By the time Arunachal Pradesh was made a state in 1987, the All Arunachal Pradesh Students’ Union (AAPSU) had built up a strong movement against giving refuge to the Chakmas and Hajongs [2]. There were strong feelings of prejudice among the indigenous ethnic groups, particularly the Adis, Mishmis, Khamtis and Singphos, against the refugee communities [3]. They were anxious that the Chakmas and Hajongs would outnumber them and dominate the future politics of the state.

By the 1980s, the settlement of the Chakmas and the Hajongs in Arunachal Pradesh became a cause of contention between the Centre and the State in Northeast India [3]. In a private member’s resolution, the Arunachal Pradesh Legislative Assembly urged the state government to take steps to propel the expulsion of the Chakma refugees from the region.

Thus, while the Central Government supported the Chakma and Hajong refugees in Arunachal Pradesh, the state government, on the other hand, took various measures against them, such as the withdrawal of scholarships and book grants, and the denial of hostel facilities and admission to schools outside of their inhabited areas.

The Arunachal Pradesh Legislative Assembly passed resolutions in December 1992 and September 1994, demanding the immediate deportation of refugees from Arunachal Pradesh. On the contrary, the Government of India ruled out the possibility of their deportation from the state, reiterating that the Chakmas and the Hajongs were eligible for grant of citizenship under Section 5(i)(a) of the Indian Citizenship Act of 1955 [4].

Due to increasing incidents of social discrimination and economic boycott against the Chakma and Hajong communities, the Committee of Citizenship Rights for the Chakmas of Arunachal Pradesh (CCRCAP) was formed 1991 to voice the demand for citizenship rights of these groups [5].

The situation became far more complex when the Chakma and Hajong communities were served with ‘Quit Arunachal Pradesh’ notices by the AAPSU in 1994, leading to massive agitations in the state. A resolution was passed by the political leaders of Arunachal Pradesh, led by the then Chief Minister Gegong Apang, stating that they will resign from the national party membership if these communities were not deported by December 31, 1995 [5]. The resolution also prohibited all social interaction between the local Arunachalees and the Chakmas-Hajongs.

The government of Arunachal Pradesh has systematically denied the Chakma and Hajong communities access to social, economic, and political rights, rights to which they were entitled under both Indian and international law [6]. India has not signed the 1951 Refugee Convention, which provides identity documents, administrative assistance, rationing (Article 20), elementary education (Article 22), and public relief and assistance (Article 23). However, it should be noted that the Government of India has recognized refugees from Tibet and Sri Lanka in the past, providing them with identification documentation and free education.

The National Human Rights Commission moved to the Supreme Court in 1996, pleading for the protection of lives and properties of the Chakma and Hajong refugees, in view of the AAPSU movement. The Supreme Court, in its judgment on January 9, 1996, directed the Arunachal Pradesh government to ensure protection of life and personal liberty of every Chakma and Hajong residing within the state. The Apex Court also directed the state government to accept applications for Indian citizenship submitted by the Chakma and Hajong communities under Section 5 of the Indian Citizenship Act [7].

The Central government set up the S.B. Chavan Committee in 1995 to look into the situation, which recommended the granting of Indian citizenship to the Chakma and Hajong refugees. The Committee decided to organize a four-party talk among the representatives of AAPSU, CCRCAP, the Central Government, and the State Government on this issue. However the AAPSU strongly condemned the recommendations of the Chavan committee, and the provision of providing citizenship to these refugees continued to lie dormant. 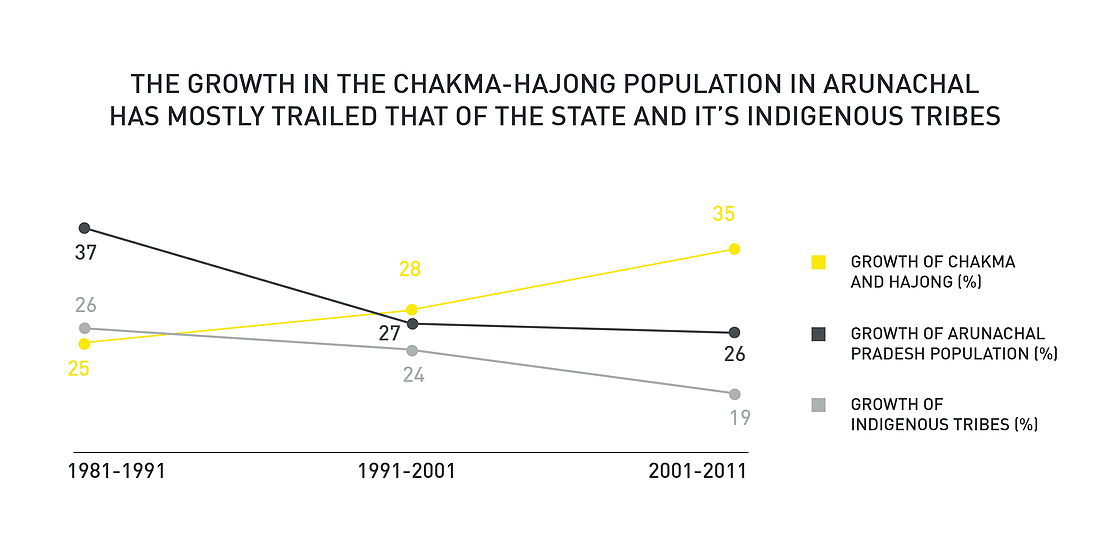 THE ISSUE OF LIVELIHOODS

The youth from the Chakma and Hajong communities are not entitled to government jobs due to their refugee status. This has left them with limited livelihood options, mostly restricted to agricultural and non-farm activities. The lack of livelihood options has compelled a large number of the educated population to migrate to metro cities such as Delhi, Kolkata, and Bangalore. Here they are mostly employed in informal sector jobs, such as salespeople in shops, factory workers or security guards. Those who cannot afford to move outside the state mostly work in the agriculture fields of neighbouring Singpho and Tangsa Naga tribes on a share-crop system [7].

The Chakma-Hajong refugees were mostly allotted land on the banks of the Noa-Dihing River. At the time of settlement, each family was allotted five acres of land. However, the erosion problem in some of the villages has left them with an acute problem in acquiring livelihoods. Over the years, agriculture has become less remunerative due to pressure caused by rising populations in the region [7]. The refugees are also denied ration cards under the Public Distribution System, which has pushed them into a state of extreme poverty.

The Citizenship (Amendment) Bill, 2016 seeks to grant citizenship to refugees from minority communities, namely Hindus, Sikhs, Jains, Parsis, Christians and Buddhists, after six years of stay in India. This created a hostile situation, particularly in the states of North-East. The indigenous people of Arunachal Pradesh, along with several civil societies and the AAPSU, are in strong opposition of the Bill, as the Chakma and Hajong refugees would also receive citizenship upon the passage of this Bill.

The intense opposition from the indigenous communities is due to their tussle over land and resources. The Citizenship (Amendment) Bill will grant the Chakma and Hajong refugees all constitutional rights, including ownership of land. All political parties of Arunachal Pradesh unanimously oppose the demand of citizenship by the refugee population on the grounds that, besides stretching available resources it would change the demographic composition of the state, and threaten the identity and culture of the indigenous people, particularly the smaller tribes of the region [8]. Many also believe that the Chakma and Hajong communities will eventually demand Scheduled Tribe (ST) status, which will lead to reductions in the number of seats reserved for the indigenous tribes in education and government jobs.

Keeping in mind the grievances of the Chakma-Hajong people, the Central Government proposed the idea of ‘Limited Citizenship’ to the refugee population. This provision will provide the refugees with Indian citizenship without any land ownership rights or a Scheduled Tribe status. However, the AAPSU and various civil societies have demanded that the government identify the Chakma and Hajong communities who came to the NEFA from 1964 to 1969 before granting them citizenship rights. This is similar to the National Registrar of Citizen (NRC) process in Assam. With the state government of Arunachal Pradesh taking a stand completely against the Citizenship (Amendment) Bill, an ambiguous path lies ahead for the Chakma-Hajong refugees.