Every year, during the months of November and December, people living along India’s Arabian Sea coast witness beautiful sparkling blue tides at night. In December 2020, for instance, such sightings were recorded in Mumbai’s Juhu and other places across Maharashtra like Devgad and Murud (Bhalerao 2020). Blue tides were also recorded in November last year along the coast of Goa, Karnataka, and Kerala (Menezes 2021). Such bioluminescence is produced by colonies of a kind of marine plankton. Mostly microscopic organisms that drift with tides, plankton are considered the foundation of the marine ecosystem because of their role as primary food producers (phytoplankton or plant plankton) and primary consumers (zooplankton or animal plankton) in the aquatic food chain.

Phytoplankton, like plants on land, use photosynthesis to create organic matter that is eaten by zooplankton, akin to herbivores on land, which are further consumed by other larger marine organisms. In fact, phytoplankton are said to be responsible for up to 50% of global primary food production (COPEPOD n.d.), making their existence central to sustaining the global food chain (both land and water), and therefore, life on Earth. This means that any major shift in their population, in a specific region or globally, can cause a severe ripple effect across the entire food chain and affect the functioning of the world’s ecosystem.

While being critical to ecosystem health, many plankton species can be toxic to marine life, as is the case with the blue tides of the Arabian Sea. Reports indicate that the glowing blue creatures spotted off the Mumbai and Karnataka coast are colonies of Noctiluca scintillans, commonly known as ‘Sea Sparkle’, a creature with properties of both plants and animals (Sastry 2020). Blooms of Sea Sparkle devour fish larvae and diatoms (a kind of phytoplankton) and produce huge amounts of ammonia that is then spread across the surrounding waters (ibid.). Their presence is also linked to a decline in dissolved oxygen levels. Scientists have linked Sea Sparkle blooms with mortality events of fish, coral, and other marine species (Raj et al., 2020:1; Aronsohn 2017).

Thus, the increased sightings of these sparkly blue tides across India’s west coast indicate a gradual and alarming shift in the ecosystem services in the region. If blooms of Sea Sparkle increase in frequency and intensity, they might increase large scale fish (and other invertebrates) mortality events and spell doom for part of India’s marine biodiversity. This could ultimately threaten fish production, the entire fisheries supply chain, and the livelihoods of millions of people dependent, directly or indirectly, on marine fisheries. India’s 8118-km-long coastline has more than 3200 fishing villages and 33 major and minor fishing harbours (Department of Fisheries [DoF] 2019; Zacharia n.d.). There are at least 3.5 million marine fishers in India, with many more indirectly engaged with the sector (Zacharia n.d.). Together they have a 1.1% share in the country’s GDP and a 3% share in total exports (ibid.). 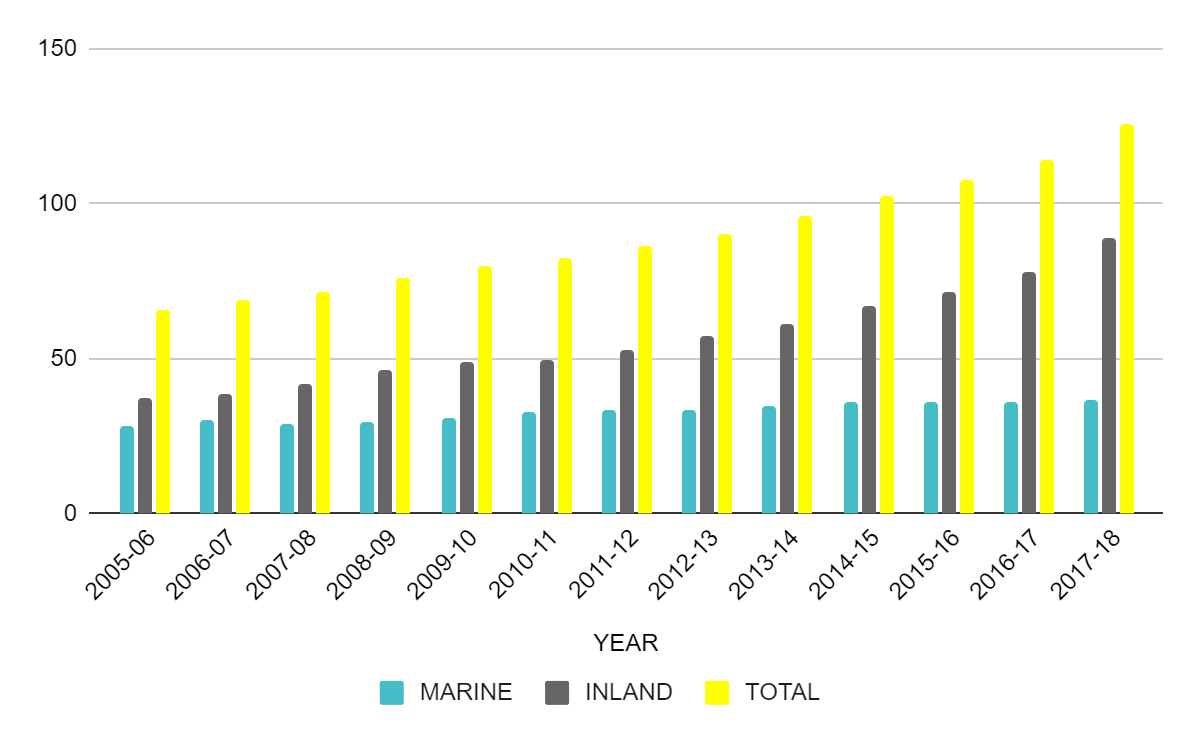 Figure 2: State-wise share of marine fish production in India in 2017-18 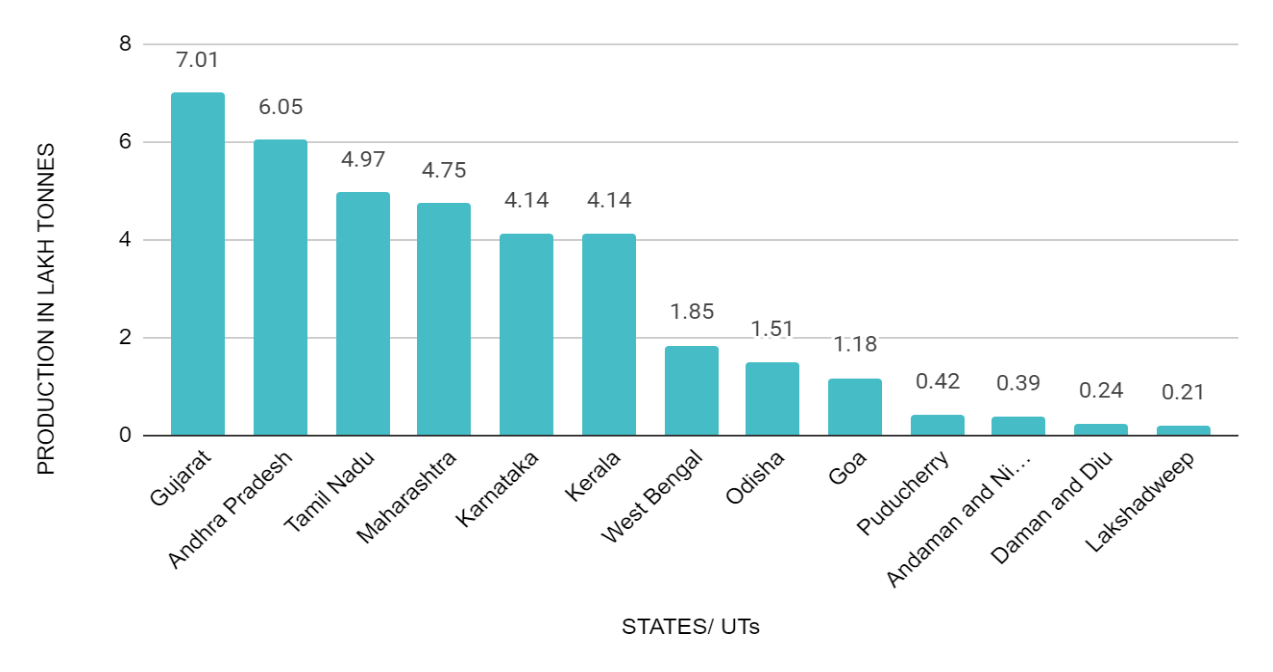 THE CLIMATE CONNECT AND OPPORTUNITIES THEREIN

From a policy perspective, a gradual increase in Sea Sparkle bloom and other similar events presents a unique challenge as well as an opportunity for action. Between 1998 and 2010, at least 80 blooming events of various types of phytoplankton were reported in both the Arabian Sea and the Bay of Bengal (Sahu et al., 2018: 263-266). Many such blooms, including those of Noctiluca scintillans, have been attributed to the expansion of low oxygen zones due to pollution caused by waste dumping along the coast.  Later, a long-term study conducted by experts from Columbia University concluded that the increase in such blooms in the Arabian Sea could be linked to declining snow cover and melting glaciers in the Himalayas and their resulting impact on temperature dynamics between the Indian mainland and the Arabian Sea (Aronsohn 2017).

While some have disputed this connection and instead credited the increasing blooming events to “natural long-term variability” (Prakash et al., 2012: 1), a review of major studies conducted on climate change’s impact on marine plankton concluded that their populations have been severely affected in the last few decades due to the rise in sea surface temperature, rise in the concentration of CO2, and influx of freshwater, all linked to global warming and ocean acidification (Sahu et al., 2018: 263-266). A joint study published by Hyderabad-based Indian National Centre for Ocean Information Services (INCOIS), an autonomous organisation under the Ministry of Earth Sciences and US-based National Oceanic and Atmospheric Administration (NOAA), also substantiated the findings of the review (Choudhary 2018). The study concluded that blooming events, particularly those of Sea Sparkle, resulted from increasing sea surface temperature due to global warming, not coastal waste dumping.

The results of these studies reveal how sensitive marine plankton are to temperature changes and how such changes can drastically alter marine ecosystems in the long run, affecting entire food chains, the carbon cycle, populations, and economies dependent on ecosystem well-being. They also reveal that continuous monitoring of changes in marine plankton populations across the world is necessary to mitigate some of its impact on fishers as well as to study the localised effects of climate change. To an extent, the latter is already happening in India through the Marine Observation System along Indian Coast (MOSAIC) and the more recent Algal Bloom Information Service (ABIS), both launched by INCOIS.

While MOSAIC gathers data on India’s coastal water quality, ABIS provides almost real-time information on the presence and extent of phytoplankton bloom across the northern Indian Ocean through satellite mapping (ESSO – Indian National Centre for Ocean Information Services 2021). The service, which also feeds into the government’s Potential Fishing Zone Advisory programme, is particularly helpful as an early-warning system for fishers, resource managers, and ecologists. Additionally, it could also help in constantly monitoring the status of biodiversity in marine protected areas and identifying areas that may require such designation in the future. India’s 2020 voluntary national review (VNR) of progress on the 2030 sustainable development agenda provides some recent data in this regard under the chapter covering SDG14 (life below water). As per the report, “India has 25 Marine Protected Areas in the peninsular region and 106 in islands, collectively covering approximately 10,000 square km of the country’s geographical areas.” (NITI Aayog 2020).

The VNR also reports that as part of the Integrated National Fisheries Action Plan (NFAP) created in 2016, the union government seeks to connect “15 million beneficiaries for livelihood opportunities through various interventions” (ibid.). It also explicitly mentions the importance of the “ecological integrity of the marine environment” to avoid any negative impact on endangered species (ibid.).

The NFAP, which was subsequently launched as the draft National Fisheries Policy 2020 (NFP), intends to,

“ensure sound management and sustainable development of the resources and associated habitats, maintaining the ecosystem integrity, meeting the food and nutritional security of the growing population, protecting the rights of the fishing and farming communities and building their resilience.” (DoF 2020)

The NFP particularly emphasises an Ecosystem Approach to Fisheries Management which seeks to balance the “well-being of all living and non-living constituents of the marine ecosystem and the social attributes and economic needs of the stakeholders” (ibid.). It also separately delineates a potential upgradation of India’s monitoring capabilities and efforts to protect Ecologically and Biologically Significant Areas (EBSA) through species-specific and zone-specific management plans. If implemented properly, this contextual and localised management approach for biodiversity conservation could propel India’s efforts under SDG14. Simultaneously, the policy recommends mariculture (salt-water farming of commercially important marine species) and alternative livelihood opportunities, given the sector is dominated by socio-economically weaker small-scale fishers.

India’s Blue Economy Policy (BEP) also emphasises the importance of increasing the sustainability of marine fishing and preventing adverse impacts on Vulnerable Marine Ecosystems (Economic Advisory Council to the Prime Minister 2020). Similar to the NFP, the BEP has a separate section highlighting the need and ways to promote mariculture. Some of these recommendations have already been accepted as part of the Pradhan Mantri Matsya Sampada Yojana (PMMSY) approved in May 2020 with an ambitious aim to increase India’s total fish production from 137.6 lakh MT in 2018-19 to 220 lakh MT in 2024-25 (Press Information Bureau 2020). However, about 42% of the scheme’s total investment of over INR 20,000 crore has been earmarked for infrastructure building and upgradation for fisheries, indicating the singular emphasis on a production-centred approach to marine ecosystem management instead of an ecosystem-centred approach highlighted in the NFP.

While one can only speculate the potential benefits of the aforementioned measures, there is an identifiable need for higher investments to ensure coastal communities can better adapt to the vagaries of climate change. Monitoring and early warning systems like ABIS are crucial to better adaptation, as are the promotion of sustainable forms of fishing and a gradual move towards alternative livelihood opportunities for small-scale fishers who will be most adversely impacted because of a possible decline in marine biodiversity. Given the impact of increasing blooming events on almost 150 million people living across several countries that share the waters of the Arabian Sea, a multilateral research and monitoring mechanism is key to understanding the future of marine ecosystem services in the region as well as ways to adapt to its rapidly changing nature.

Sustainable Consumption: A View From the Global South