Procurement of COVID-19 Medical Equipment: A Comparative Case of Uttar Pradesh and Delhi

Over the last week, several as yet unsubstantiated claims have been made regarding irregularities or a possible scam in procurement of Covid-related medical supplies in the state of Uttar Pradesh (UP) [1]. The irregularities are said to be in the varying prices at which Panchayats across several districts procured equipment such as oximeter, thermometer, PPE kits and N-95 masks [2]. A second allegation has been made against the UP health department’s procurement agency, the UP Medical Supplies Corporation (UPMSC). The UPMSC, as per media reports, procured essential medical equipment at a rate much higher than the market price. Taking note of the situation, the UP government has set up a Special Investigation Team (SIT) to investigate the said claims [3]. However, procurement data from UP’s Panchayati Raj department, the UPMSC as well as the Government e-Marketplace seem to indicate that the claimed irregularities are actually reasonable price variations because of market dynamics.

On June 26th, an order was issued by the UP’s Panchayati Raj department to disburse funds from the State Finance Commission for procurement of medical equipment by Gram Pradhans. The order laid out three procurement categories based on market rates. For a total equipment cost of upto INR 20000, the panchayat head could make an over-the-counter procurement; for equipment cost between INR 20000 and INR 1 lakh, the supplier was supposed to be finalised based on a formal quotation; any procurement over INR 1 lakh was to made through an official tender. Following the order, Gram Pradhans across districts like Shahjahanpur, Gonda, Bulandsheher, Banda, Muzaffarnagar, Balrampur, Siddharthnagar, Ghaziabad, Moradabad, Rampur, Shamli, among others, procured necessary medical equipment. As per available official records, the highest procurement cost for Oximeters was INR 2400 for six pieces in Muzaffarnagar. The lowest was in Rampur at INR 700. Similarly, the highest procurement cost for Infrared Thermometers was INR 2800 in five panchayats in Gonda compared to the lowest at INR 1200 in four panchayats of Sonbhadra district.

This variation in costs, highlighted in the media as a “scam” could have been a result of the variation in market rates of medical equipment as the pandemic progressed. In the initial months, the supply was low compared to the sudden rise in demand which led to higher market prices. As the supply increased over the next few months, the costs came down organically. The government, prioritising the need to fulfill the rising demand and save the lives of the people as well as health workers, must have procured the equipment initially at an unavoidably higher cost. This, coupled with the fact that better quality equipment generally costs more, meant that there was significant variation in the procurement costs across panchayats based on the needs of the local population at any given time.

The effect of dynamic market rates is evident from the changing procurement cost of medical equipment in documents acquired from UPMSC (table 1). For instance, the procurement cost of an Infrared Thermometer was INR 5298 in March, INR 3366 in April, and INR 2538 in May. The same for an Oximeter was INR 1392 in May and INR 1164 in June. A similar trend can be seen in the procurement costs of PPE kits over the course of the pandemic. In the initial stage of the pandemic, PPE kits were procured by the UPMSC from HLL Lifecare Limited, a Kerala-based manufacturer owned by the Government of India. The per unit cost of a PPE kit was INR 1087 at that time compared to INR 950 per unit in late April. Similarly, the per unit cost of a PPE coverall was INR 367 in May compared to INR 275 in July. The cost differential could be attributed to the fact that as the pandemic progressed and demand increased, the cost-competitiveness in the market between suppliers also increased, leading to a fall in prices.

PROCUREMENT RATES IN DELHI: SOME DISCREPANCIES

Notably though, there are certain orders in Delhi’s case where there are unreasonably high procurement costs (table 3). For instance, one order of Infrared Thermometer has been procured at INR 8250 in June by the Education Department of Delhi Government. The same department has procured the same equipment at INR 9000 in August. The costs are even more inflated in the case of Oximeters procured by the Health Department at INR 66320 per piece in June. The same equipment was bought at INR 3000 per piece by the city’s Forest Department in August. Needless to say, the cost differential in these cases and others mentioned in table 3 below remain unexplained even after taking into account changing market rates. These discrepancies have neither been reported so far in the media nor taken up for review by the Delhi Government. 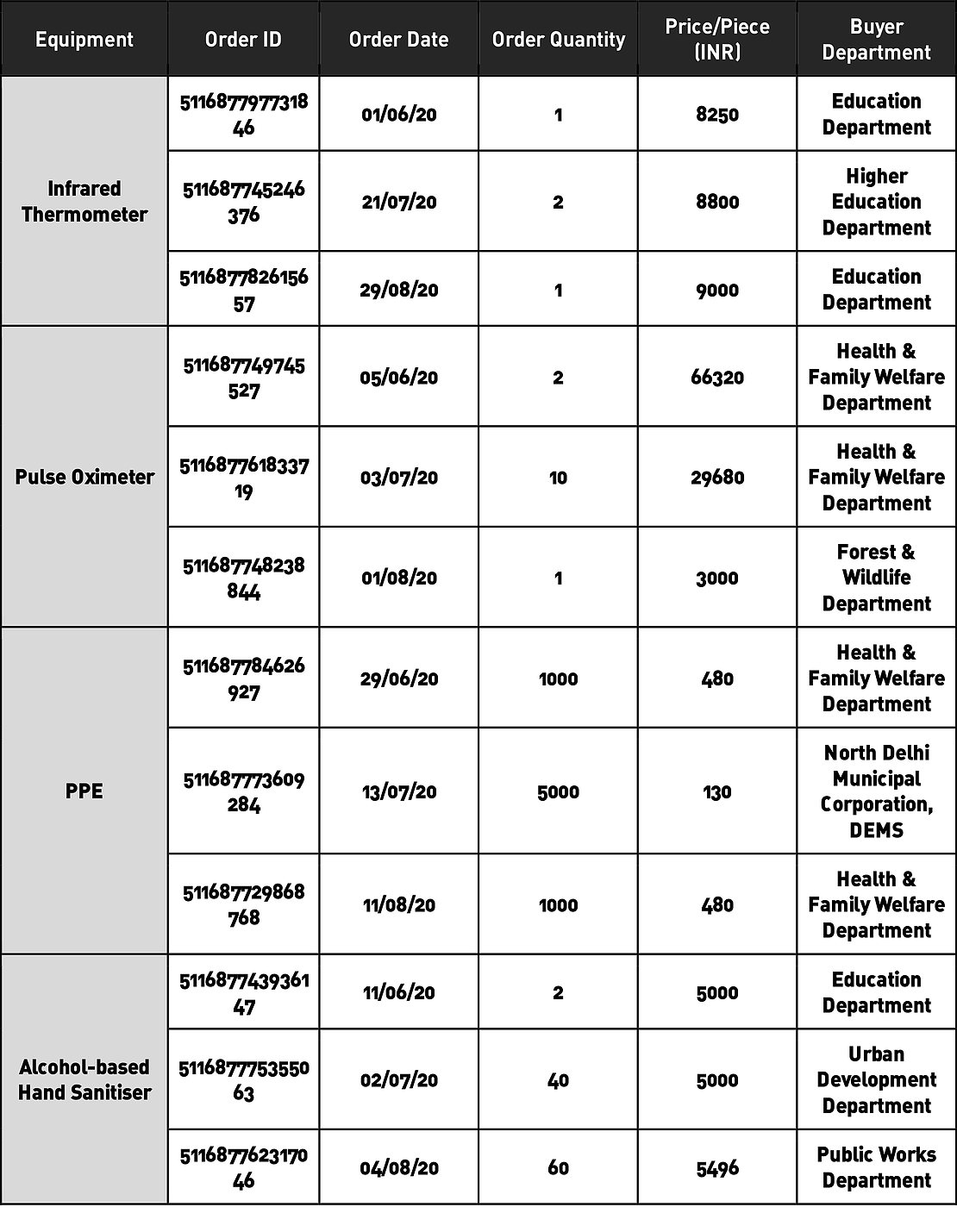 The political brouhaha over the variation in procurement costs in the case of UP seem to be a result of a poor reading of available data as well as an apparent lack of knowledge regarding changing market rates. Comparing the current costs of medical equipment with procurement costs in the initial days of the pandemic is akin to being willfully ignorant, to say the least. However, there are certain orders procured by various departments of the Delhi Government which show inflated costs not necessarily on account of reasonable market dynamics. These orders deserve a closer scrutiny. Notably, similar allegations of higher procurement costs have also been made against the State Government of Punjab [4]. Whether those allegations have any merit remains to be seen.

Refugee Protection in India in the Absence of Specific Legislation

Looking at Post-Conflict Reconstruction Through a Gender Lens