“When the Panchayat Raj is established, public opinion will do what violence can never do.”

In November 1938, the ruler of the small princely state of Aundh abdicated and declared that its affairs shall, henceforth, be managed by the people of Aundh themselves. In what was an unprecedented step, a ‘Swaraj Constitution’ was drafted for the people of Aundh with the help of Mahatma Gandhi and Maurice Frydman, a Polish Engineer, and Gandhian. The Aundh Experiment served as a base experiment and example of ’Swaraj’, as envisaged by Gandhi, and was one of the earliest tests of local self-government in the princely states of India. While it is hard to gauge the extent of progress achieved in the decade that followed, the arrangement persisted till India gained independence, and Aundh merged with rest of India. The Aundh Experiment was successful in demonstrating that ‘Panchayati Raj’ was a realisable dream.

The evolution of Panchayati Raj can be traced back to Lord Ripon’s resolution of 1882, often referred to as the Magna Carta of local self-government in India. The resolution provisioned the establishment of local or district boards. These boards enjoyed considerable autonomy within their respective domains of governance, and were provided with various financial endowments and grants. They, however, continued to remain under the indirect control of the government. Lord Ripon’s resolution mainly aimed to achieve greater uniformity in administration, and intended for local bodies to serve as an instrument for “political and popular education” of the masses. The Montagu-Chelmsford Reforms of 1919 assigned local self-government to the provincial legislatures as a “transferred subject” [1]. This arrangement was retained after independence, and the legislative powers pertaining to the management of local bodies continue to vest with the state legislatures. 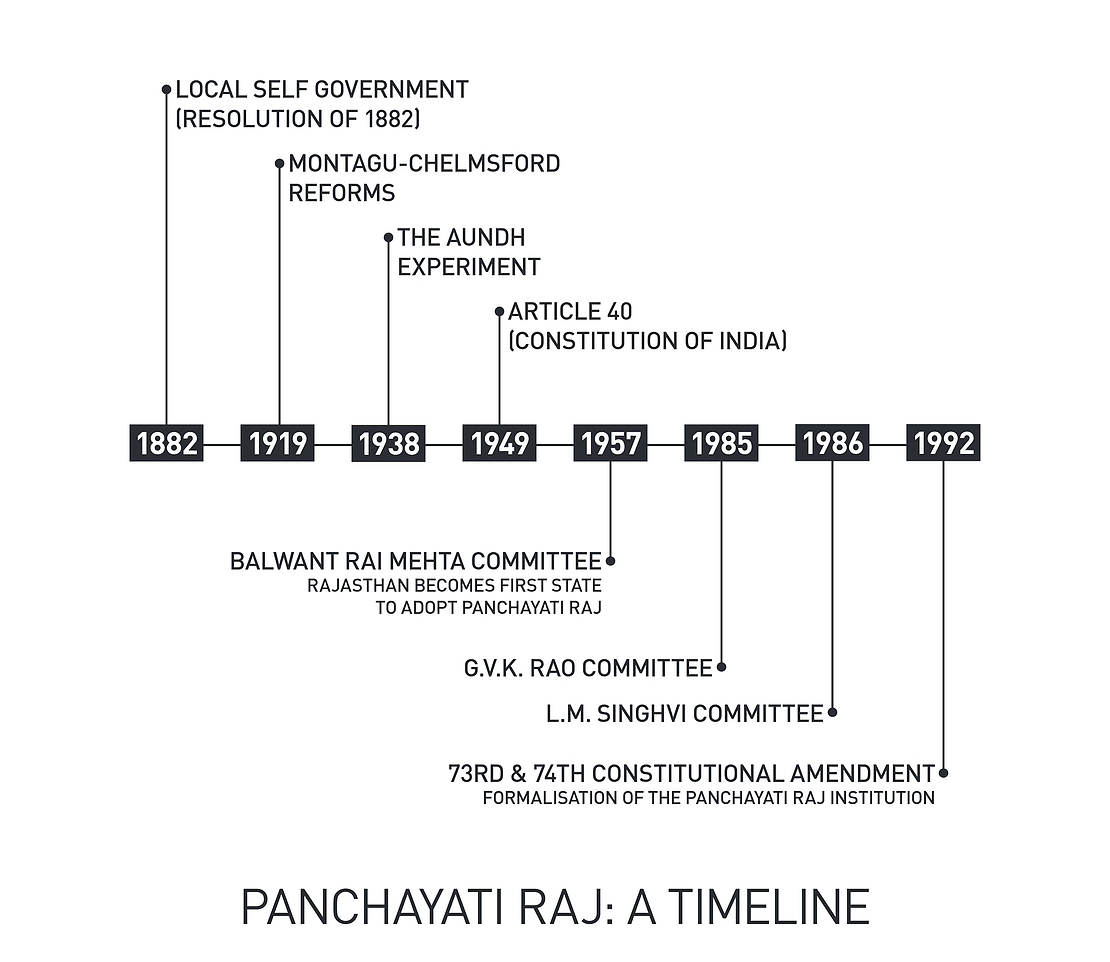 India was quick to realise the importance of grassroots democracy as it set up its government post-independence. The Constitution of India, under Article 40, provisioned that “the state shall take steps to organise village panchayats and endow them with such powers and authority as may be necessary for them to function as units of self-government.” In 1957, the Government of India appointed the Balwant Rai Mehta Committee to examine the workings of the National Extension Service and Community Development Program. The Committee recommended a scheme for “democratic decentralisation”, as well as a three-tier system with directly elected members at the village level. The recommendations of the Committee were accepted by the National Development Council. Rajasthan became the first state to adopt the system.

While many states implemented Panchayati Raj in some form, there was a lack of uniformity among the models adopted by different states. The formalisation of the system of Panchayati Raj in India culminated in the 73rd and 74th Constitutional Amendment Acts of 1992. The Act added a new Part IX, titled “The Panchayats”, to the Constitution. The Eleventh Schedule was appended to enumerate the subjects that may be delegated to panchayats by the respective states.

Panchayats are small units of self-government constituted at the village, block and district level. The composition and powers of the panchayats are determined by the respective state legislatures by law. The Constitution stipulates direct elections of members of a panchayat at all levels. The elections to the panchayats are required to be conducted by the respective state election commissions every five years. Part IX also provides for reservation at all levels for SCs and STs, in proportion to their population, while a minimum of 1/3rd of the total seats in any panchayat are to be reserved for women.

The state legislature may also endow the panchayats with certain powers of taxation, so as to allow them to function independently; these may be supplemented by various grants. Article 243i mandates that the states constitute a State Finance Commission every five years to examine the devolution of financial powers and the distribution of grants to panchayats and propose measures to augment their financial position.

It is important to note that the 73rd Amendment Act does not stipulate a one-size-fits-all model of Panchayati Raj. It offers the states flexibility to fine-tune their system of local government to a certain extent. Moreover, some regions have been excluded from the ambit of the Act, owing to their unique demographics and a significant tribal population. These include the 5th and 6th Schedule Areas, the states of Nagaland, Meghalaya, Mizoram, hill areas of Manipur, and the district of Darjeeling in West Bengal. The Panchayats (Extension to Scheduled Areas) Act, 1996, was enacted to extend Part IX to the Fifth Schedule Areas with minor exceptions and modifications.

India boasts an impressive 2.55 lakh Panchayati Raj Institutions (hereafter PRIs), with over 31 lakh elected representatives. The 73rd Constitution Amendment has both mandatory and voluntary provisions. All states covered under the Act have implemented the mandatory provisions which include organisation of Gram Sabhas, reservations of seats for women, SCs and STs, the establishment of a state election commission and state finance commissions. The states, however, have been unsuccessful in implementing the voluntary provisions under the act in earnest. These voluntary provisions include two key pillars on which the success of any system of local government rests: devolution of powers and fiscal decentralisation.

Local self-government falls under the State List of the 7th schedule of the Constitution. The administration of the panchayats is, therefore, the responsibility of the respective state governments. Even though the 73rd Amendment mandates the creation of panchayats in each state, the devolution of such powers and authority as may be required for the panchayats to function effectively as units of self-governance has been left to the state legislatures as a “voluntary provision”. In this respect, the performance of the states has been found to be severely lacking.

Devolution, in the context of Panchayats, entails devolution of finances, functions, and functionaries. Panchayats are envisaged not merely as a “delivery mechanism” constituted for administrative convenience, but rather as institutions that are, for the most part, self-supporting and can function independently of the governments at the state and the centre to meet local aspirations. For this to become a reality, the panchayats must be endowed with adequate resources, infrastructure, manpower, and autonomy.

According to the Devolution Report 2015-16, core development functions like agriculture and allied sectors, small scale industries, education, health, drinking water, social welfare, poverty alleviation, public distribution, rural roads and welfare of Schedule Castes (SCs) and Schedule Tribes (STs) have been transferred to PRIs in most states. Devolution of functions, in some cases, is unscientific and counterproductive. Further, in terms of functionaries, it is largely non-uniform and difficult to factor in. There is often ambiguity regarding the exercise of control over functionaries. These inadequacies in human resources may predominantly be quantitative, as is seen in states like Uttar Pradesh and Bihar, or qualitative, as is the case of Kerala.

Fiscal decentralisation is the cornerstone of the Panchayati Raj system. Devolution of functions and functionaries is meaningless if PRIs are not accorded significant financial autonomy. The PRIs in India derive their income from various sources. These include grants-in-aid, shares of central and state taxes, assistance under various schemes, and internal sources of revenue. An overdependence on discretionary grants leads to an erosion of autonomy of the PRIs. According to the Economic Survey 2017-18, only 5% of the total income of PRIs is obtained through their own sources. The survey expressed concern over the low tax collections by local governments in rural areas, and warned that a reluctance on the part of the states to devolve funds to PRIs poses a serious challenge to fiscal federalism in India.

The problems faced by panchayats are not limited to a lack of devolution. The PRIs face various other constraints, including a lack of infrastructure, the presence of parallel governments, undue interference by higher authorities, and a lack of awareness. Concurrently, proper implementation of PRIs is contingent upon the political will of the governments at the state and the centre.

Despite these shortcomings, people continue to repose their faith in the panchayats. Elections to panchayats have been held regularly across almost all states, and the voter turnout has been consistently high. Further, the utility and efficacy of PRIs has been demonstrated time and again across the country.

If sufficiently empowered, Panchayati Raj Institutions can drive change from the bottom up. India must, therefore, endeavour to implement Panchayati Raj in both letter and spirit, if the vision of an Indian democracy that is truly “of the people” and “by the people” is to be realised.

[1] The transferred subjects (i.e., those under the control of Indian ministers) included local self-government, education, public health, public works, and agriculture, forests, and fisheries. The system ended with the introduction of provincial autonomy in 1935.