Laws for Journalists in India: An Overview

India has seen a significant rise in attacks against and killings of journalists in recent years, making it an increasingly hostile place to practice journalism. In the last two decades, India’s ranking on the World Press Freedom Index dropped from 80th to 142nd. This issue brief discusses the shortcomings in the Indian legal framework in creating a safer environment for media persons. The brief also discusses the deteriorating nature of journalistic norms and the role media watchdogs play for journalists in our country.

Journalism, the fourth pillar of democracy, underpins sound governance and democratic accountability. The Indian Parliament defines a journalist as a person employed by a newspaper establishment as an editor, writer, reporter, correspondent, photographer, or proof-reader (Working Journalists and other Newspaper Employees and Miscellaneous Provisions Act 1955). Maintaining the safety of journalists is crucial to facilitating the exchange of information and news on matters of public interest.

Over the years, there has been a steep decline in India’s performance on international indices that measure relative press freedom across countries. In December 2020, India featured in Reporters Without Borders’ (RSF) list of Five Deadliest Countries. In their first World Press Freedom Index published in 2002, India’s rank was 80th, and in the latest report (Reporters Without Borders 2020), the rank dropped to 142 out of 180 countries (see figure 1 below).

For the World Press Freedom Index, RSF uses quantitative and qualitative data to rank 180 countries. The former is derived by calculating reported attacks and violence on journalists. For the qualitative data, a questionnaire is sent to an expert team consisting of media professionals, lawyers and sociologists, across many countries. The questionnaire studies seven categories: Pluralism, Media Independence, Self-censorship, Legislative Framework, Infrastructure, and Abuse. Based on them, two scores are calculated — ScoA (calculates the first six factors) and ScoB (all the factors). The final score is the greater of these two scores. This distinction is made to ensure a country with low violence but high censorship would not receive an overall low score (high rank). 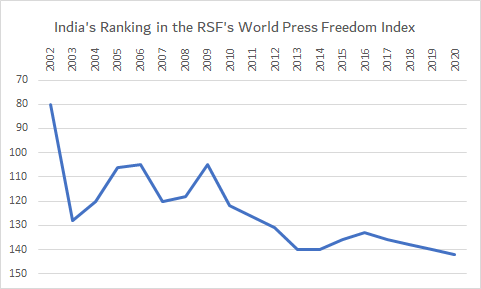 The Global Impunity Index created by Committee to Protect Journalists (2020) [CPJ] ranks countries where journalists’ murders receive complete impunity. The Global Impunity Index is calculated by taking a percentage of the number of impunities received for journalists murdered per million population. The index was first compiled in 2008, and since its inception, India has consistently featured in the list.

Refugee Protection in India in the Absence of Specific Legislation

Looking at Post-Conflict Reconstruction Through a Gender Lens