On the intervening night of June 15-16, Indian and Chinese troops engaged in a violent clash in Ladakh’s Galwan valley. As per the Indian Army, 20 Indian soldiers were killed in action (KIA) while there were unconfirmed casualties on the Chinese side [1] [2]. The violence came on the heels of confrontations in Ladakh’s Pangong Tso starting May 5-6 and in Sikkim’s Naku La on May 9 [3]. The current clash is only the latest in a long list of escalations and de-escalations on the disputed border between the two countries that have mostly resulted in a stalemate, barring the 1962 Sino-Indian war. In fact, the events of the current clash are similar to the clash between the two countries in Ladakh’s Kongka La in October 1959, the year the initial border skirmishes started. In the Kongka La incident, 17 Indian soldiers were killed in action when the Chinese, in what they called an “act of self-defence”, started “sudden and aggressive firing” on Indian troops [4].

The periodic clashes and the resulting uncertain (or negative) peace in the region begs an obvious question – how do the two countries end up in these standoffs time and again? The answer to this question holds the key to understanding how the two Asian giants approach the issue of border management, and how that, in turn, affects the border dispute. The following analysis attempts to understand the same.

THE SOURCE OF THE DISPUTE

At the heart of the dispute is the undemarcated Line of Actual Control (LAC), in the eastern sector (Arunachal Pradesh and Sikkim) and the western sector (Ladakh). The middle sector covering the states of Himachal Pradesh and Uttarakhand is largely undisputed [5]. The protracted nature of the dispute can be gauged by the fact that the two countries don’t even agree on the length of the border. For India, the border is 3488 km long, while China considers it to be 2000 km long, owing to differing claims of the two countries [6].

The contemporary roots of the border dispute go as far back as the 1950 invasion of Tibet by China after which China and independent India came to share international borders for the first time [7]. Eventually in the mid-1950s, Indian authorities discovered that China had built a 180 km long road through Ladakh’s Aksai Chin region connecting its newly occupied territories of Tibet and Xinjiang [8]. Subsequently, a series of letters were exchanged between Jawaharlal Nehru and then Chinese premier Zhou Enlai during November 1959 – March 1960, around the time the first border skirmishes occurred [9]. The letters not only reflect a fundamental disagreement about the events that transpired during the border skirmishes and the contested territorial claims of the two countries, but also lay the groundwork for how the dispute shaped up eventually.

The following table compares statements by the two premiers in the series of letters on various aspects of the dispute to understand the contrasting approaches taken by the policymakers of the two countries. 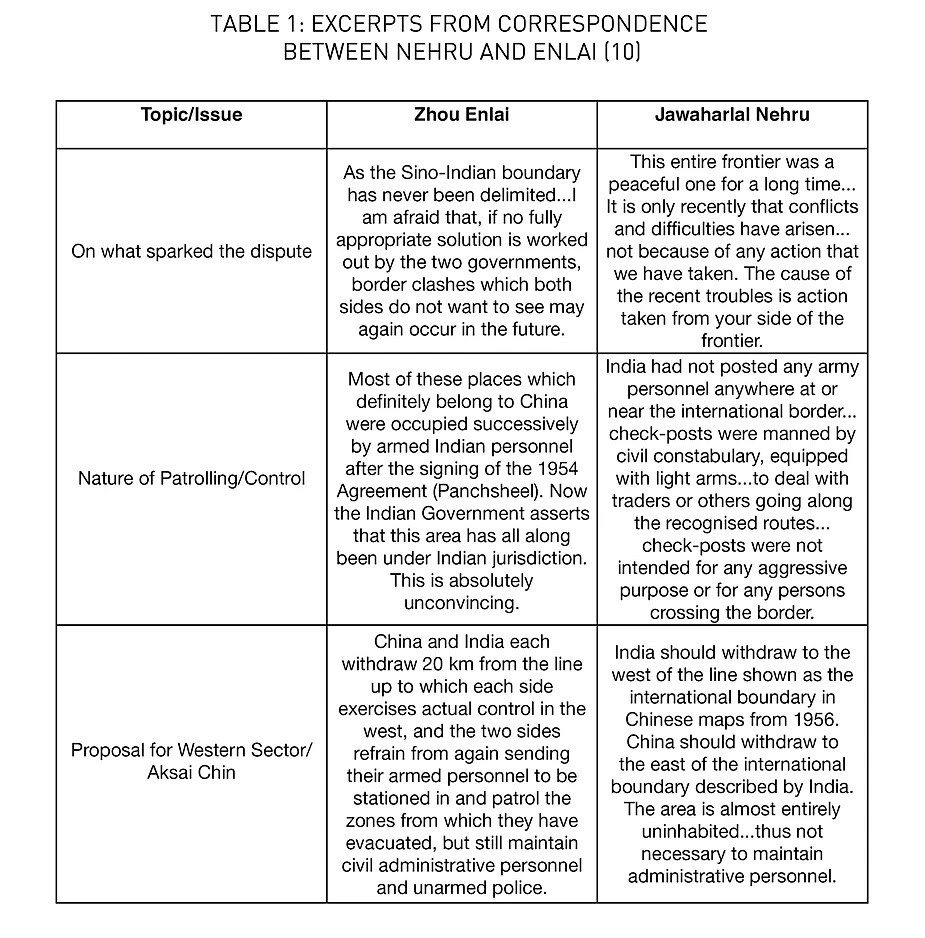 Though not enough to provide the full extent of the contested claims of the two countries, several themes emerge from these excerpts.

One, China considered lack of boundary delimitation as the cause of the dispute. India, on the other hand, considered that there was never any need to delimit the boundary presumably because it consisted of natural barriers like watersheds, valleys, and mountains accepted historically as natural frontiers between the subcontinent and the Tibetan plateau. Additionally, India clearly identified Chinese aggression as the source of the dispute. Further reading of the exchange of notes between the Indian foreign ministry and its Chinese counterpart around the same time as the Nehru-Enlai letters reveals that India recognised ‘demarcation’ or the lack of it as the key issue [11]. Delimitation is possible when two parties agree to a common boundary, while demarcation is the act of marking such a boundary on the ground through extensive surveys.

Two, it is clear that India did not feel the need to effectively fortify its claimed borders in Ladakh and elsewhere along the Himalayas. One can infer that the lack of a tangible threat and the desolate high-altitude nature of these regions were the primary reasons for this. Unlike other modern nation states including China, India displayed a reticence in securing its border territories in the high Himalayas. China, as can be seen in the table, was more steadfast in recognising the importance of having policing and administrative personnel on the ground. Notably, post the defeat of 1962, India did gradually strengthen its border outposts along the LAC and invested in border infrastructure. However, a clear policy of restraint can be observed on India’s part throughout the history of the dispute in attempting to take back lost territories, with China having de-facto control over Aksai Chin since 1962. Most prominently, this restraint is reflected in the terms of the first bilateral agreement on the border issue that the two countries signed in 1993, which stated,

Three, there is an ambiguity that results from the lack of delimitation and demarcation of the border. This ambiguity provides a conducive environment to periodic contestations, particularly from a country like China with a documented history of aggression. Since the war of 1962, some of the key incidents of Chinese aggression along the LAC have been recorded at Sikkim’s Nathu La in 1967, Arunachal’s Tulung La and Sumdorong Chu Valley in 1975 and 1987, Ladakh’s Daulat Beg Oldi in 2013, and the Doklam plateau at the trijunction of the border between China, Bhutan and India in 2017.

A similar tendency of contestation can be seen in China’s actions during the latest clash over the Galwan valley. The Chinese had never laid claim over this area throughout the history of the dispute, yet they are now doing so [13] [14]. The fresh claim goes clearly against the understanding reached as part of the 1993 agreement mentioned above. It is this ambiguity borne out of the undemarcated nature of the border that allows the Chinese to renege on a bilateral agreement. In this context, exchanging maps regarding claimed boundaries is a way to reach a commonly agreed LAC. However, even after signing five agreements on the border issue in 1993, 1996, 2005, 2012, and 2013, China has only exchanged maps on the border in the middle sector in 2002 [15]. This stalled process of exchange of maps, in turn, feeds into the ambiguous nature of the border. This ambiguity works strategically in China’s favour because it allows them to keep laying claims on undemarcated territories.

It is clear from the analysis above that the India-China border issue is primarily a contest between two parties with polar opposite approaches to border management. One side clearly seeks to keep the LAC ambiguous and indeed benefits from it, while the other side practices strategic restraint and seeks to maintain the status quo ante every time a border standoff develops. While this unlikely pairing of belligerents has resulted in multiple stalemates over the years, the current situation cannot be mistaken as peaceful by any stretch of imagination. Brutal clashes like the one in Galwan valley highlight the fundamental flaws in the various confidence building measures taken up by India and China since the 1980s as well as the resulting agreements. Comparatively speaking, out of the 20 neighbours with which China has had border disputes, it has reached resolutions with at least 8, including former rivals like Vietnam and Russia with which resolution was achieved after an armed conflict [16]. Certainly, India needs to reevaluate its current approach to the boundary question with China as till now, restraint on its part has only yielded a ‘peace’ that is hostage to periodic Chinese belligerence.