The Adi Ganga-Tolly Nullah is an old channel of the Ganges flowing across the southern visages of urban Kolkata. It moves through the fringes of the city and finally meets the Bay of Bengal. Though various mediaeval indigenous literature such as The Mangal Kavyas and colonial accounts mention the river’s socio-economic paramountcy, at present, like most South Asian rivers, the river acts more like a dumping site. However, Adi Ganga’s intrinsic value moves beyond its historicity since it plays a vital role in the city’s sanitation and ecological governance. The river’s resilience as a sacred and pure entity despite being heavily polluted and becomes an interesting aspect for its study. Despite pollution and metro railway constructions interrupting its stretch, Adi Ganga retains the old world charm with many cultural signatures such as old temples, ghats, and age-old traditions still deeply rooted in it. This case study reviews the Kalighat and Kudghat to explore the two aspects of the river’s evolution from the lens of cultural heritage and development initiatives on the riverbank.

(“This is a very old river, with many histories. In our childhood, we used to swim in it so much, but now we can’t even imagine!”).

The quote from one of the elderly residents of Kalighat echoes the sentiment of the river bank settlers who lived in the Adi Ganga bank for centuries. These residents have seen the river’s transformation from a majestic distributary to a stream resembling a sewer. The foul stench emanating from the river body, trapped under organic and inorganic waste, makes it indecipherable from textbook definitions of rivers.

The Kalighat reach was culturally vibrant owing to its history enmeshed with the folk and religious culture. Kalighat houses a mediaeval era temple on the ghats of the Adi Ganga that worships Goddess Kali. As per Indian mythology, it is one of the shaktipeeths that hosts the toe of Goddess Sati. Hence, the ghats rose to prominence as a Hindu pilgrimage site. The devotees continue to flock the river to take baths in hopes of purifying their souls from mortal engagements.

Consequently, the social and cultural life grew with the Kalighat temple as the epicentre. Various economic activities grew around the temple and the river, harbouring an intrinsic relationship with the cultural values that stem from the river. For instance, century-old professions such as selling religious offerings, pottery, and even prostitution still thrive.

Numerous residents who bought land to be close to the river and the temple have built steps leading to the river where they perform morning religious prayers in private. Marginalised communities currently live in clusters around the banks, having settled there 50-70 years ago, mainly during partition and after the 1971 Bangladesh Liberation war. A prominent section of the stretch is occupied by the prostitutes who found shelter on the ghats centuries ago, thereby giving an interesting context to enmeshed sacred-sin assemblages.

Despite the holiness attached to it, the river is by no means pure at this point. The city’s sewage being released into the stretch, supplemented by the dumping of inorganic waste, deeply pollutes the river. The foul smell emanating from the waterbody gives away its location from kilometres providing a glimpse into the daily lives of residents here. Adi Ganga’s ecology and heritage are at risk. The people living on her banks, from the old residents to squatters, lament the loss of a once-pristine Adi Ganga, which now has a dark grey-green hue. Unfortunately, this does not discourage the pilgrims from contaminating the river by dumping plastic bags filled with ritual flowers and bathing with waste floating in the river around them. The Kolkata Municipal Corporation [KMC] employees, who clean the river manually every day, suggest that people’s respect for the river is guided by superstition and, therefore, superficial. Only if the local community starts recognising the river for its natural characteristics will its history and heritage be salvaged.

In the early 2000s, Kolkata’s metro railway construction on a section of Adi Ganga began despite years of activism against it. Environmentalists, river experts, and grassroots activists petitioned the courts, claiming that the construction would be a death knell for the river. The grassroots activists protested against the upcoming eviction drive for the settlers on the Kudghat-Garia stretch. However, the plan was sanctioned due to an archaic colonial law that gave the railways paramountcy over water resources in the country. Three hundred pillars were constructed directly on the river bed. The eviction of thousands of squatters left the most marginalised communities without shelter and security.

The river still flows. Although it struggles under rampant urbanisation and increasing pollution, it converges with new storylines around channelling and cleanup developing across the stretch of Kudghat. The metro railway plan was the state’s outlook of the city’s developmental plan to modernise transportation across southern Kolkata, even at the cost of an ecological resource. With the squatters evicted from the river stretch, the Adi Ganga-Tolly Nullah bank at Kudghat is guarded with inclined brick walls to discourage settlements and waste dumping from residents. However, the metro railway has increased the area’s real estate value, creating an influx of middle-class residents unaware of the river’s history or ecology. 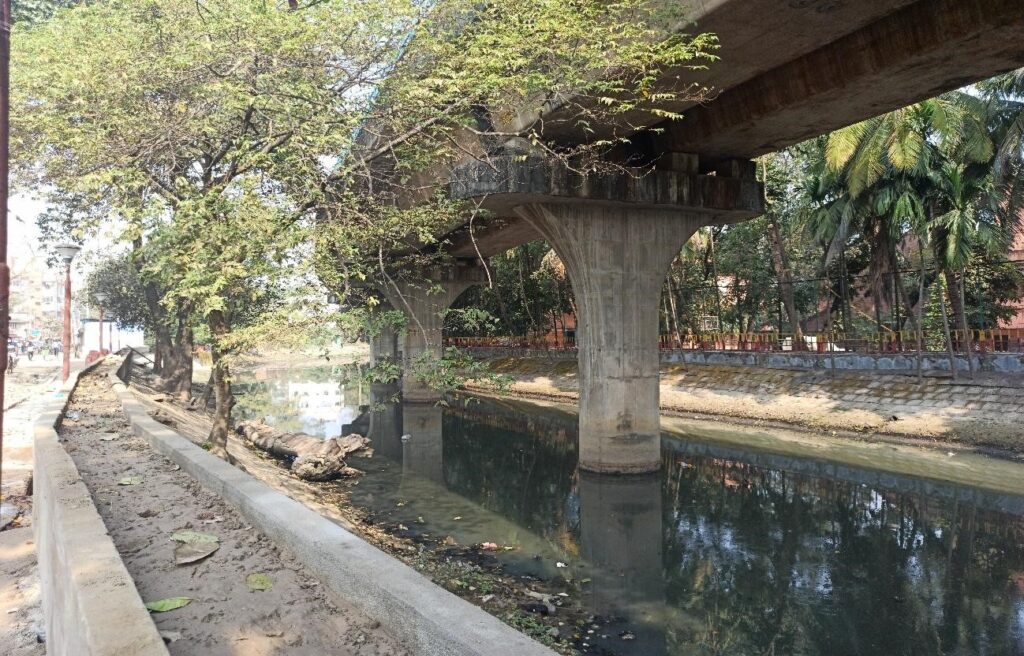 (“Because of the metro, we have to work harder to keep the river clean. With lesser people living on the banks, it is now manageable. The other ‘free’ stretches are not actually this clean, you go check yourself.”)

The above statement was from one of the KMC employees working to keep the river free of various inorganic waste dumped by locals. The workers painstakingly clean the rivers, using small boats and makeshift bamboo tools to pick up plastics from the water. The conflict between the residents and workers is apparent. The residents continue dumping garbage in the river despite pleas from the KMC workers. The KMC workers suggest that the construction of the metro had actually facilitated better cleanup of the river, something lacking in other stretches. The continued dumping of ritualistic flowers and domestic garbage demonstrates the need for awareness around urban waters among residents. Adi Ganga’s resilience is apparent from its struggle to exist. The river’s future sustainability can only be assured through proper multi-stakeholder engagement and awareness.