By Jitendra Bisht and Neymat Chadha

Over the last two censuses, India’s urban population grew to over 31% of the total population registering an annual growth rate of 2.7%. Estimates suggest that while a third of the country’s population currently live in urban areas, by 2050 this number could go up to 814 million, or 50% of the projected total population of 1.6 billion (Bhagat 2014: 4). Over time, India has become a water-stressed country, with the per capita water availability steadily decreasing since 1951 (Figure 1). The government’s premier policy think tank, NITI Aayog, has also noted that over 600 million people, i.e. almost half the country’s population, face high to extreme water stress (NITI Aayog 2018: 15). With the urban population increasing, the share of urban water demand is expected to grow drastically.

Figure 1: Per capita water availability in India vs Population 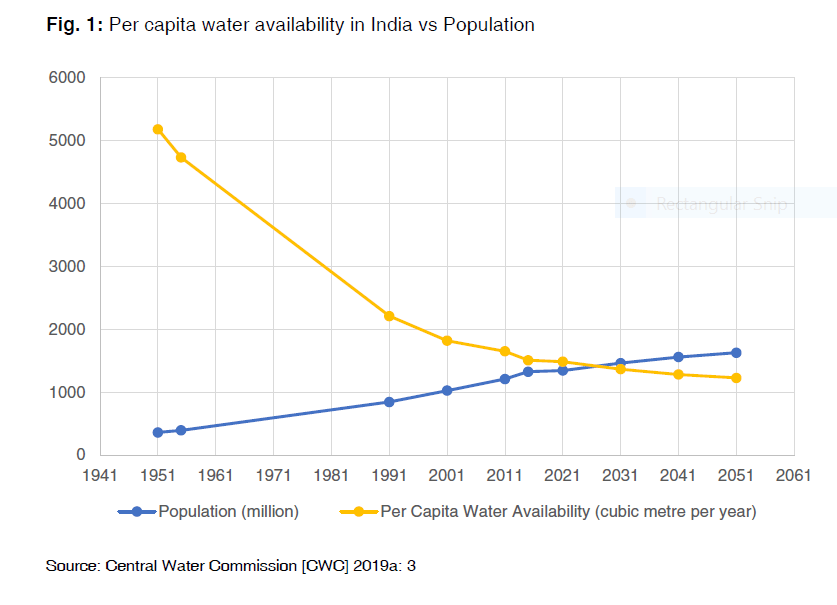 Much of the recent literature on urban water management in India refers to the premise illustrated in Figure 1 where a rapidly increasing urban population is going to put immense pressure on its water resources (Aartsen et al., 2018; Bassi and Kumar 2012; Gupta et al., 2012; Punjabi and Johnson 2018; Shah 2016; Shah et al., 2016; Shah and Kulkarni 2015; Wankhade et al. 2014). Studies on urban water management that employ a Malthusian lens place population as the key element behind increasing demand and competition for available water resources across urban areas.

Thus, a general shift towards demand management can be increasingly noticed in policy frameworks. The Urban Water Policy framework, launched in 2019 by the Ministry of Housing and Urban Affairs [MoHUA] and National Institute of Urban Affairs [NIUA], on the one hand, emphasises the need to address multiple supply-side issues such as “adequacy and frequency of water supply, affordability and pricing, water quality and institutional sustainability of water utilities” (MoHUA-NIUA 2019). On the other hand, it also calls for a paradigm shift towards “demand management and reducing the wastewater footprint of cities”. Apart from reducing the wastewater footprint of cities, the stated vision of the document is to manage water demand. This vision indicates the primacy accorded to water demand in urban water management measures. It further iterates that there are “limits to the extent of supply side solutions to meet the growing demand for water supply to urban India” (ibid). This policy brief seeks to understand the severity and main source of demand-side issues in water management, as well as some extant issues on the supply side. It further explores the state of monitoring urban water supply as well as the financial woes of urban local bodies (ULBs).