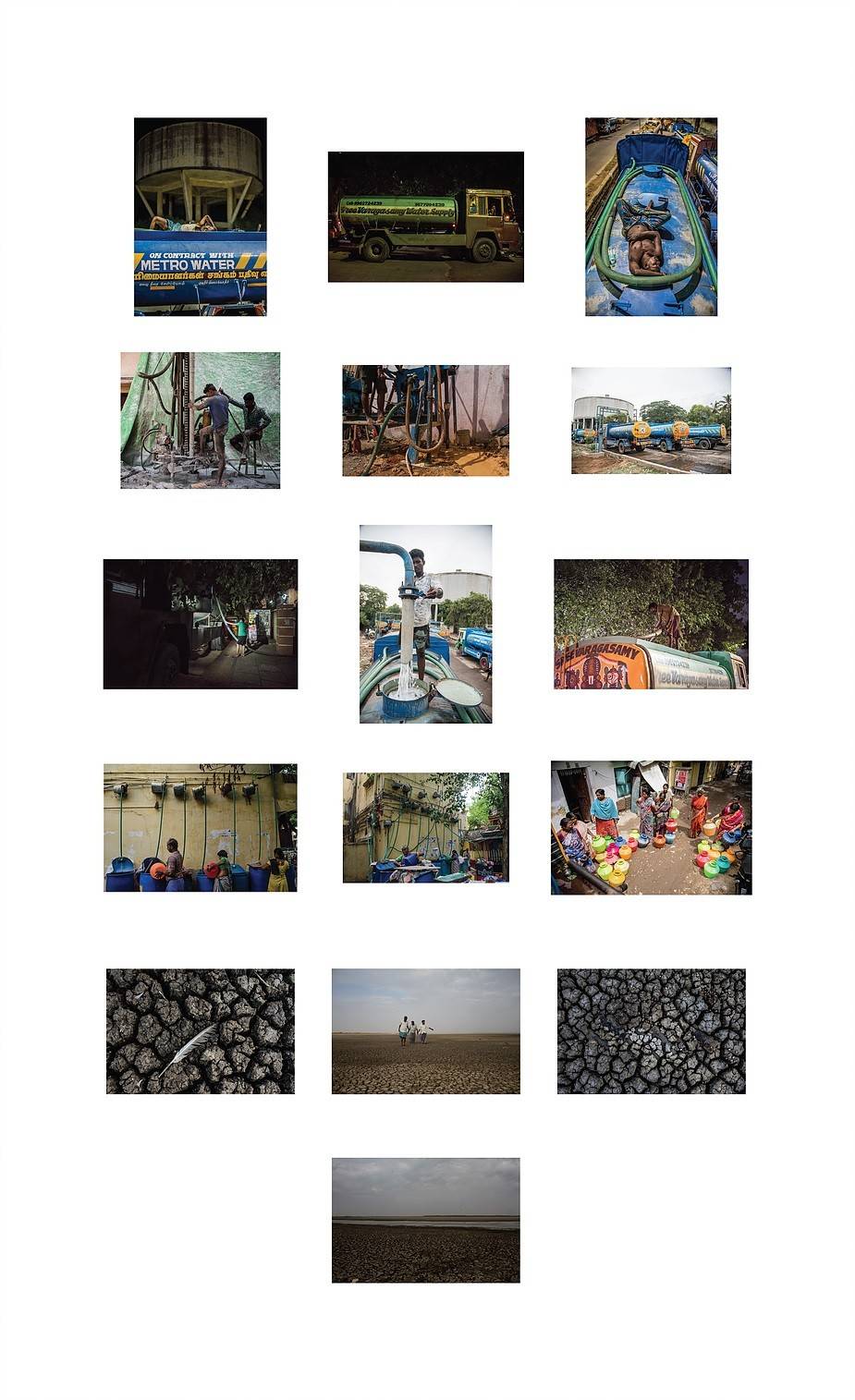 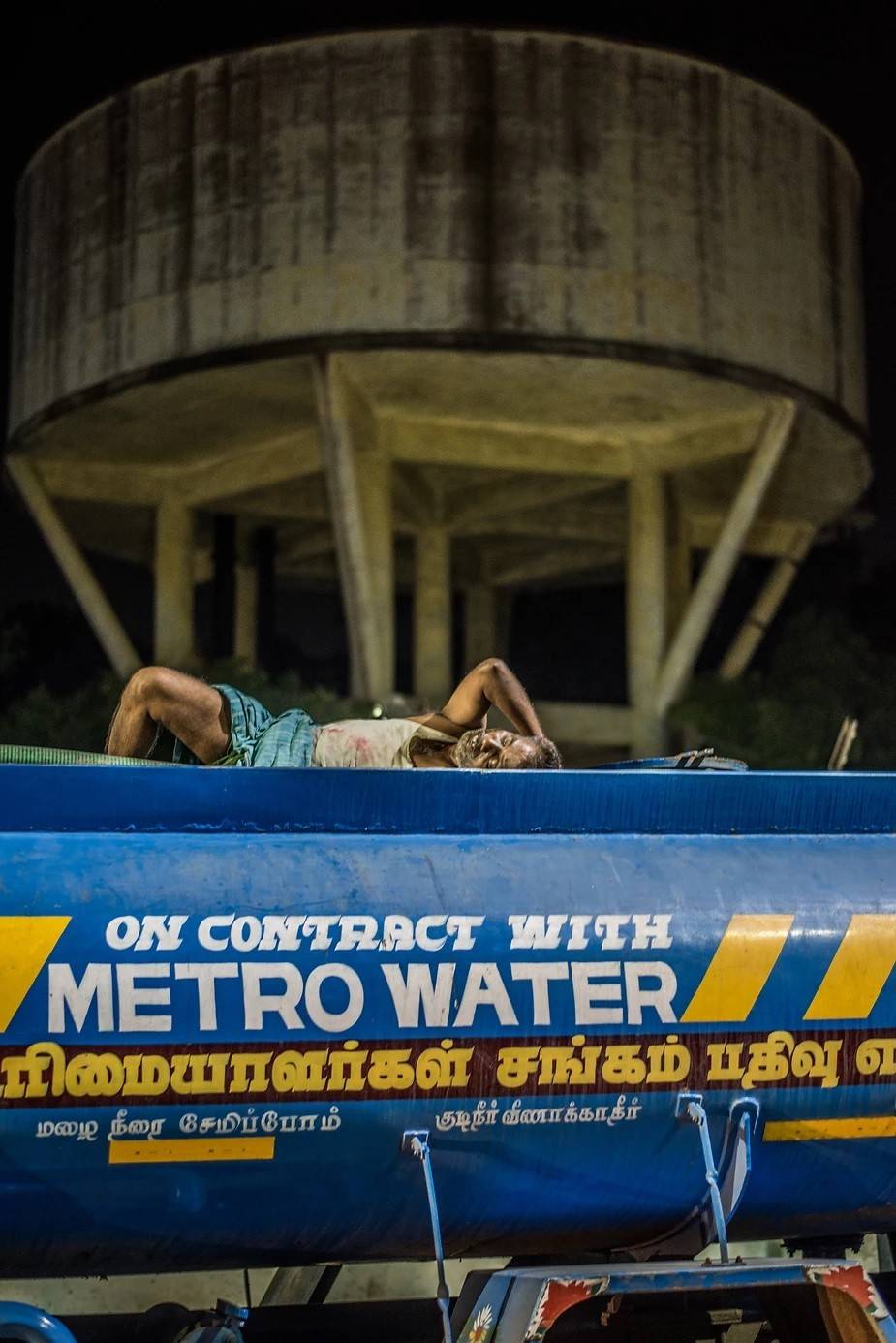 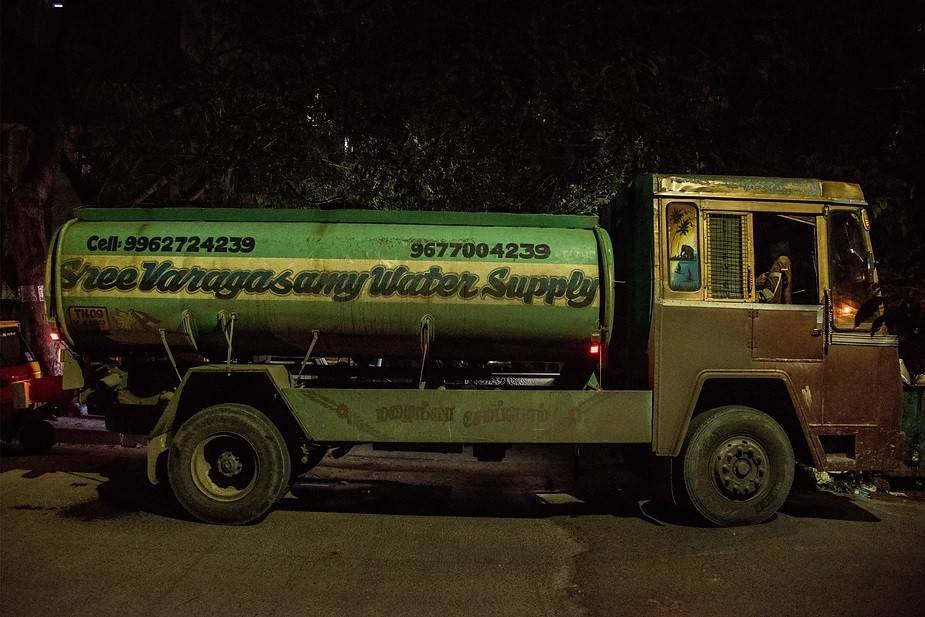 Drivers work over-time due to the increased demand for drinking water in the Valluvar Kottam Metro water pumping station, Chennai. They work past the midnight and still take trips throughout the day. Photo by: Steevez Rodriguez/PEP Collective. 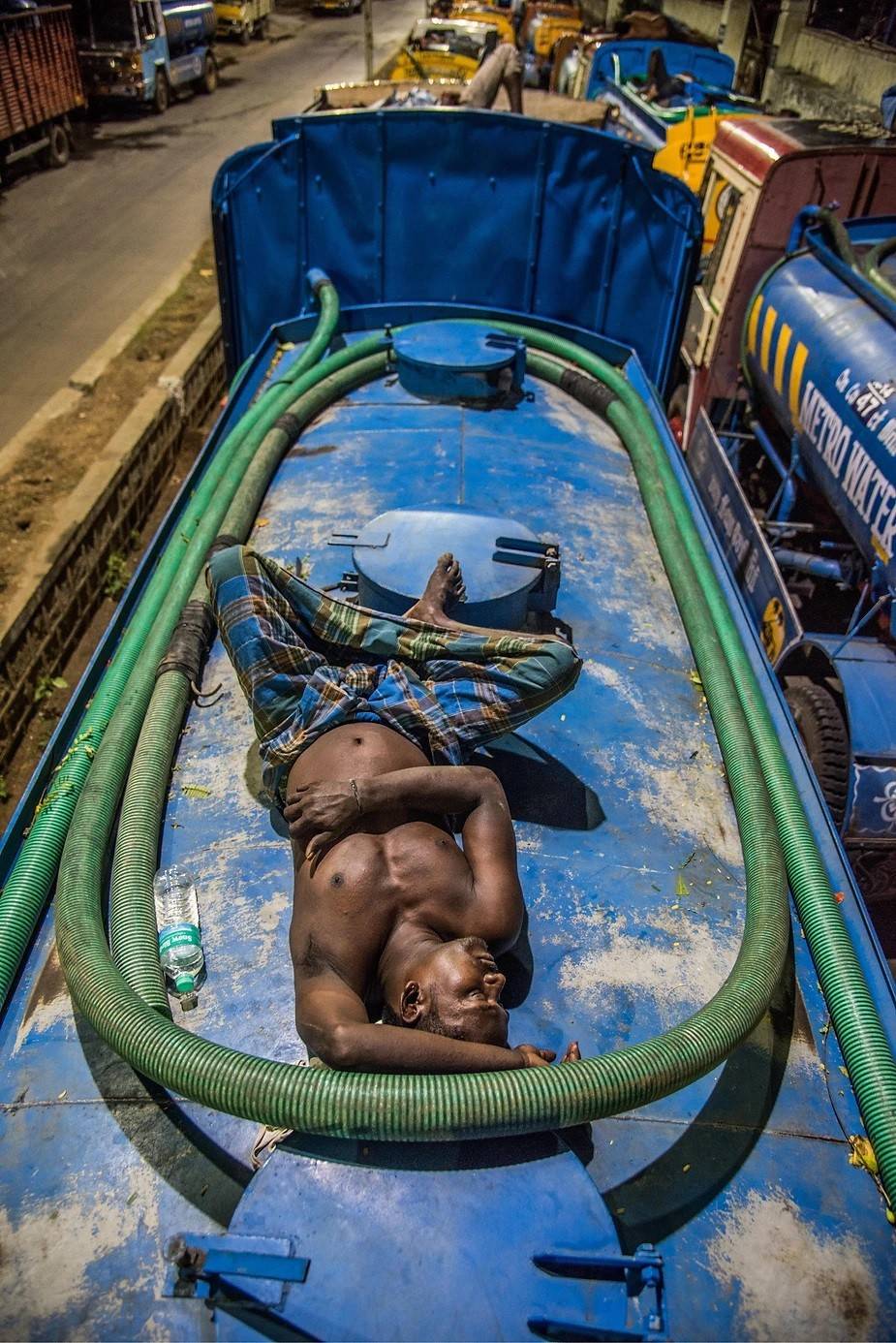 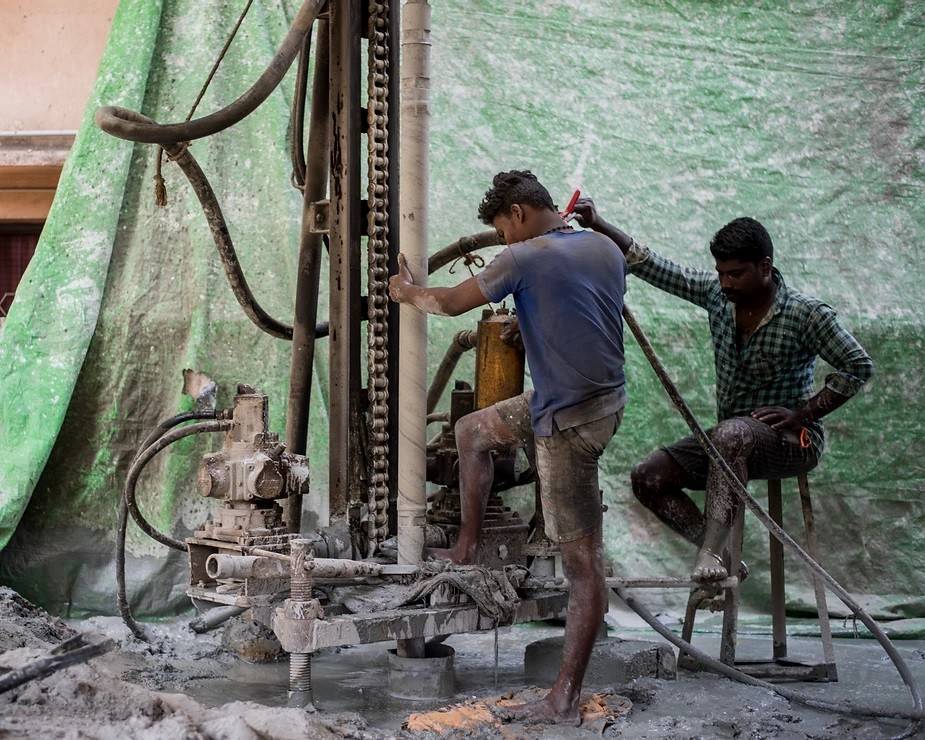 Drilling a bore-well: With an increasing demand for water in Chennai, the dependancy on ground water has increased amongst the residents of Chennai. They drill new wells or deepen the existing ones. Photo by: Steevez Rodriguez/PEP Collective. 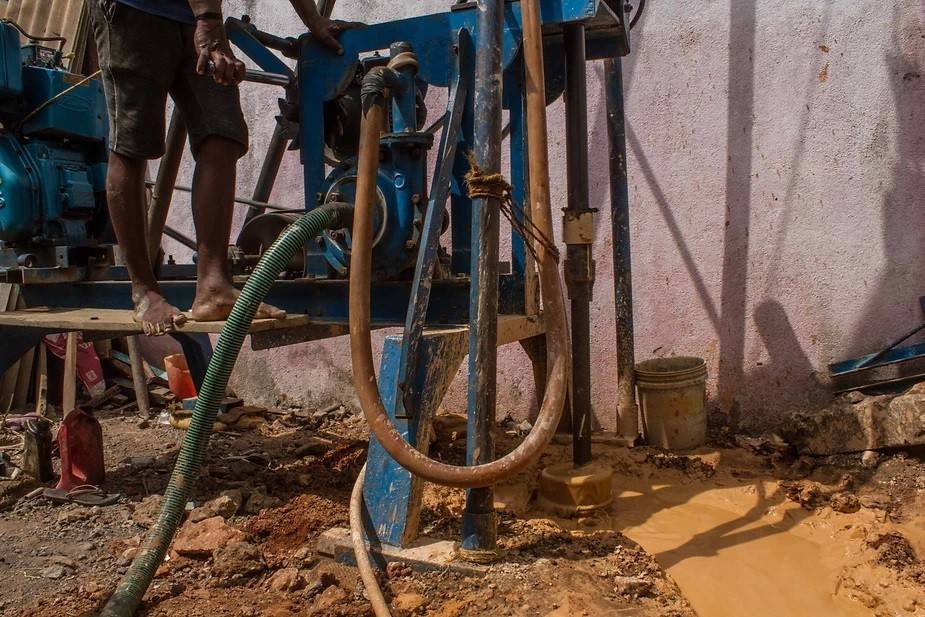 Drilling a bore-well and trying to locate the water table: The ground water table is also dry in most parts of the city. Thus the probability of getting water in the bore-wells is low in many areas. Photo by: Palani Kumar/PEP Collective. 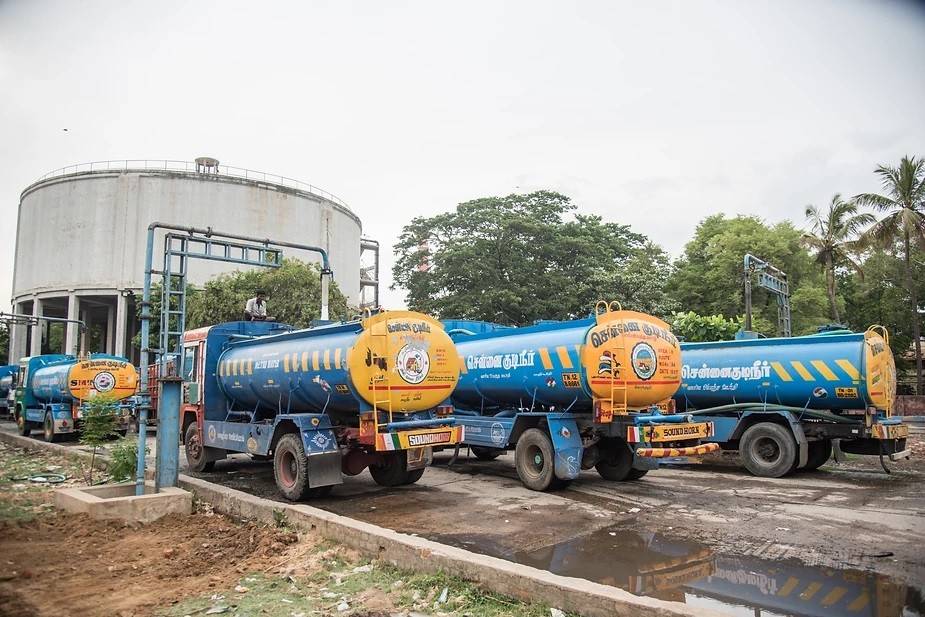 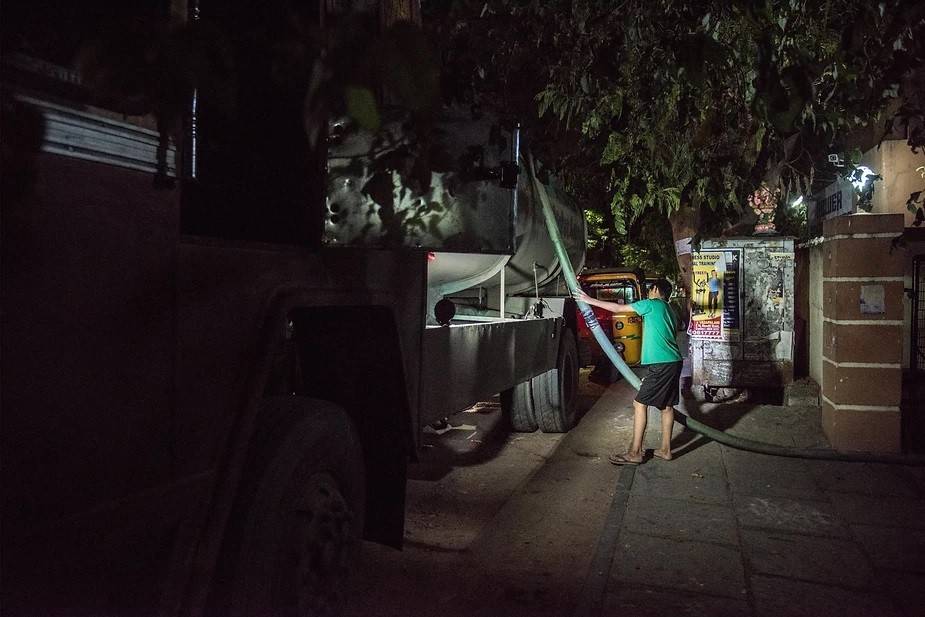 Water is distributed throughout the day till midnight. The demand is at a pace that to supply water to most parts of the city once in 2 days, the metro water stations work throughout the day and night. Photo by: Steevez Rodriguez/PEP Collective. 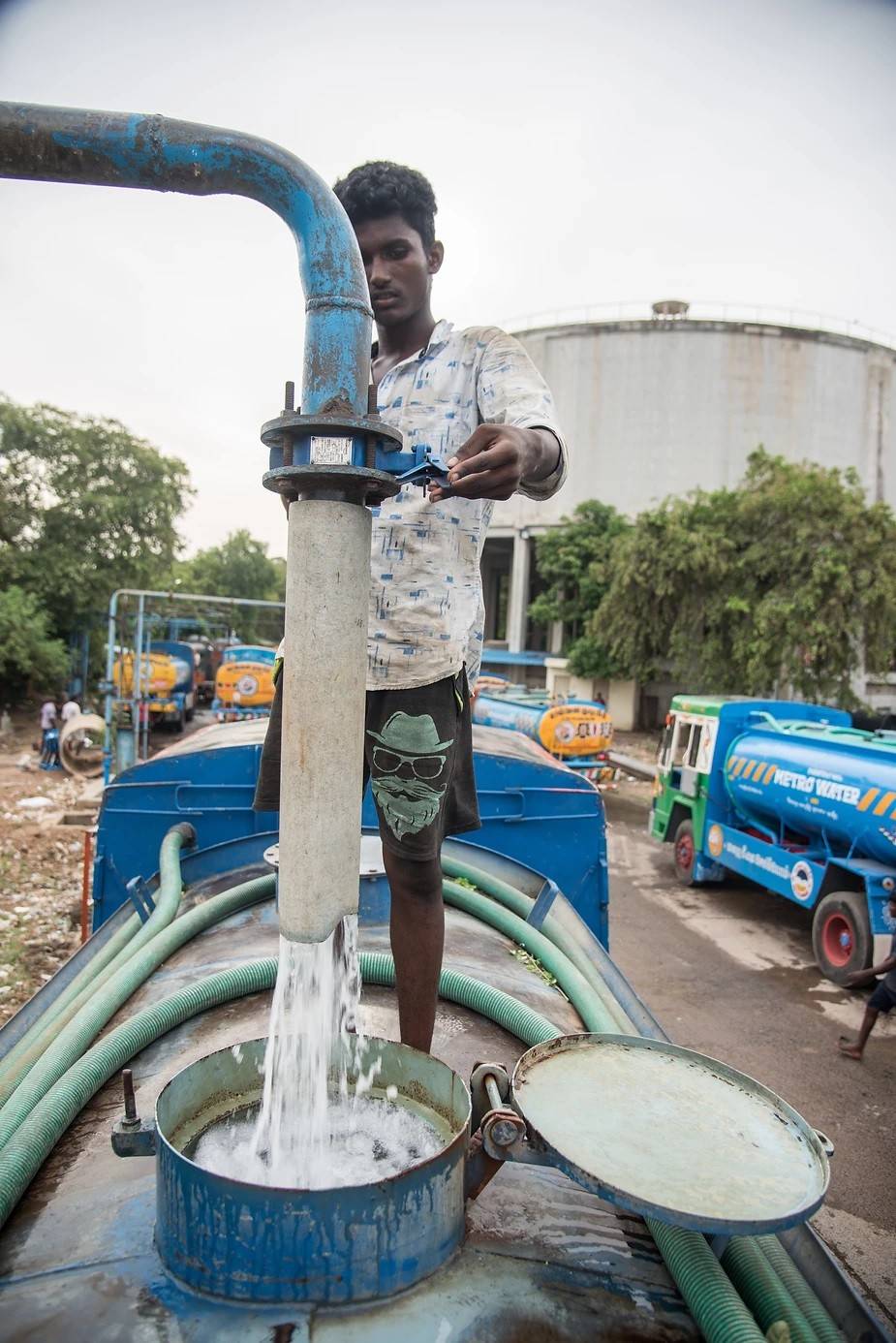 A Metro water tanker is filled with water in a Metro water pumping station: They are the only lifeline for the citizens of Chennai. They make multiple trips through the day filling at metro stations and distributing them across various places. Photo by: Steevez Rodriguez/PEP Collective. 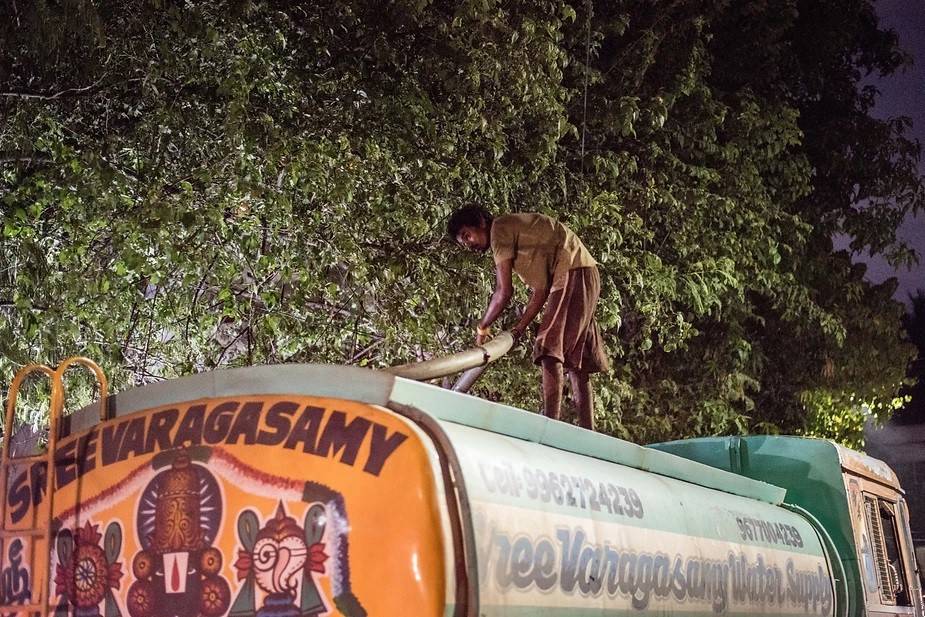 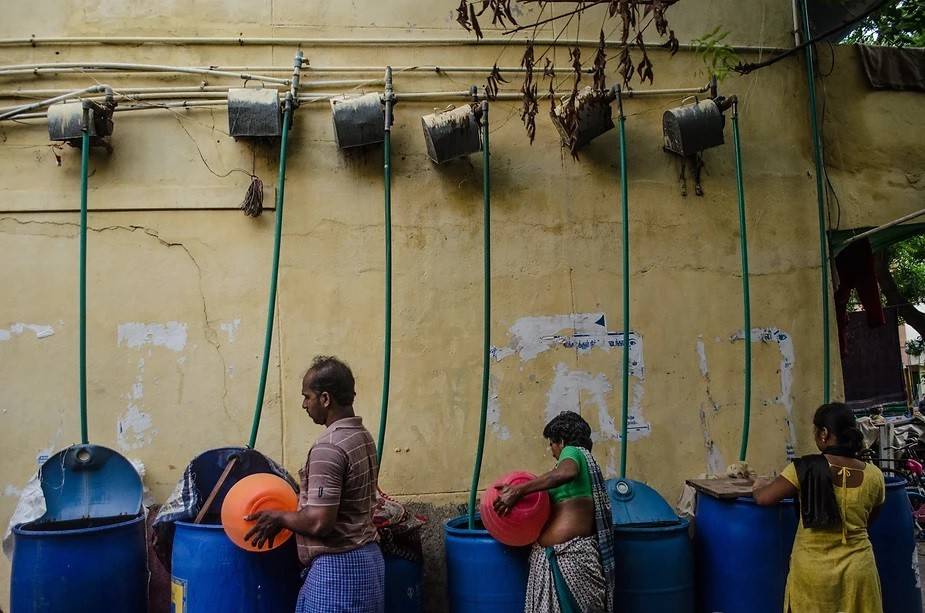 The Housing Board in Paruva Nagar, Chennai with its customised pumping system: The residents fill their barrels with the tanker water, which in turn is pumped through a motor to their overhead tanks. They use a barrel of water for 2 days. Photo by: Palani Kumar/PEP Collective. 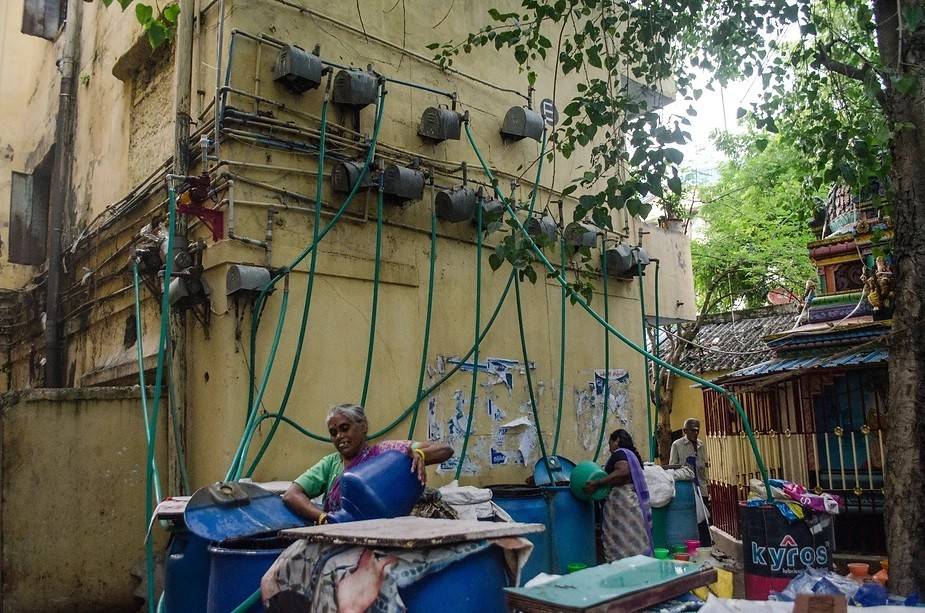 A woman filling her barrel with water fetched from a water tanker. Photo by: Palani Kumar/PEP Collective. 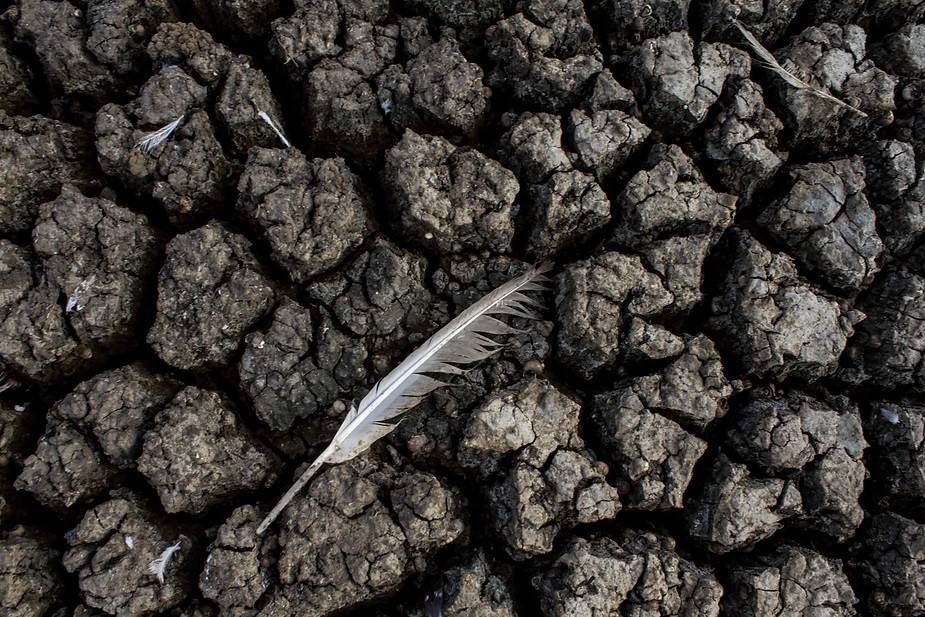 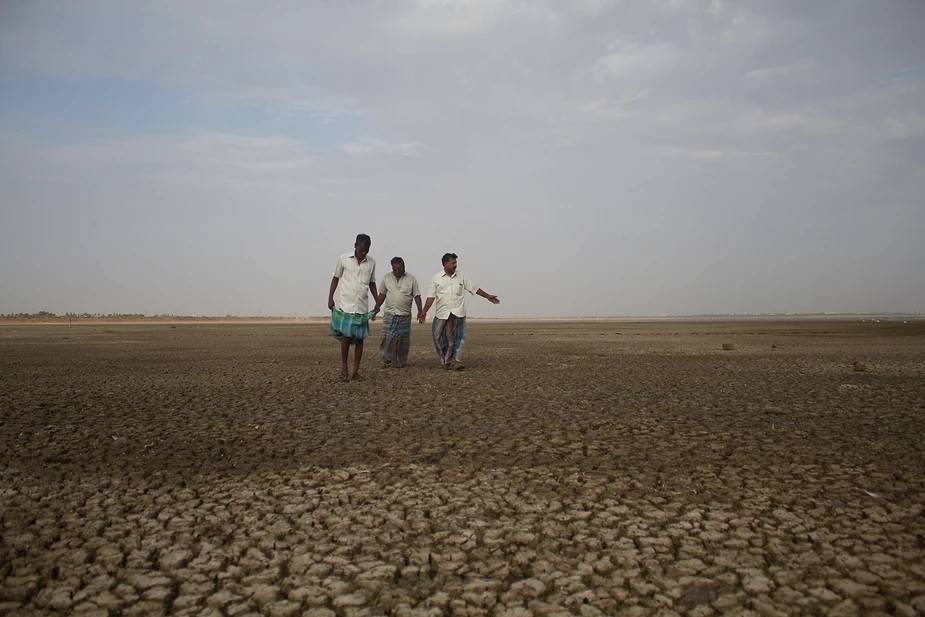 The abandoned pumping system in the Puzhal lake due to the drying up of the entire lake, which is also one of the major sources of drinking water in Chennai. Photo by: Palani Kumar/PEP Collective. 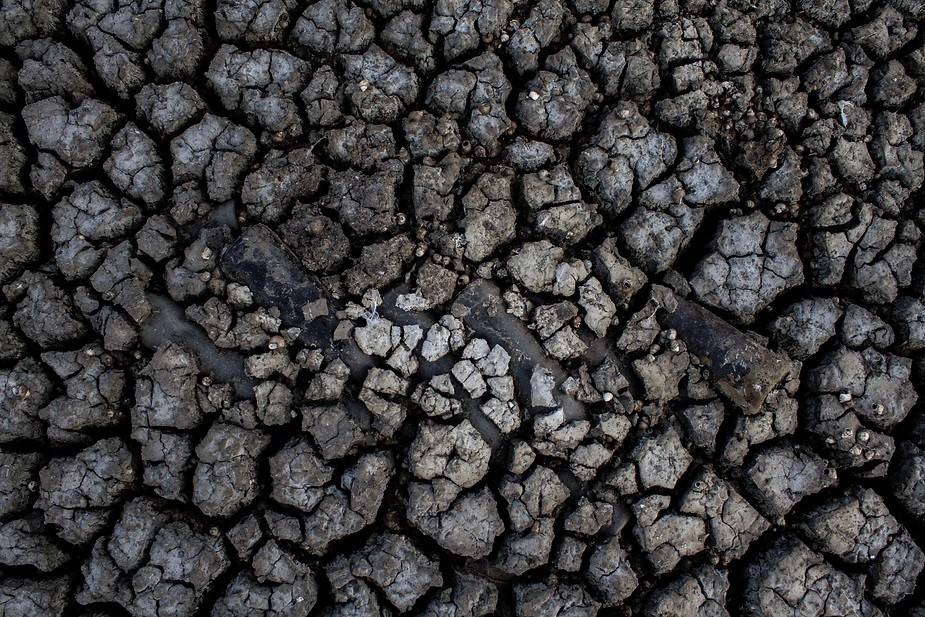 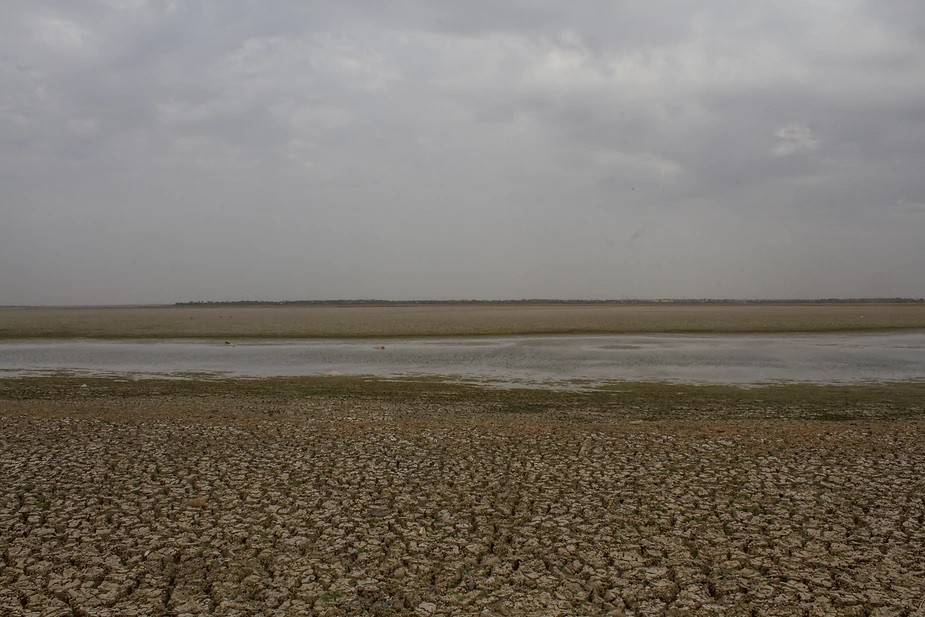 People walking across the completely dried up Chembarambakkam lake, which used to be an impossible task during the monsoon. Photo by: Palani Kumar/PEP Collective.

The past few months have seen Chennai go through its worst water crisis to date. Coming just a few years after the devastating floods of 2015, these events have quite clearly demonstrated the lack of preparation for any kind of disaster on the part of the administration. The current shortage of water has been a long time coming, and has been precipitated by a multitude of factors.

Firstly, due to rapid urbanisation, encroachment has been a constant problem. Buildings have been built haphazardly, with no regard for the water bodies in and around Chennai, as well as nearby marshlands. As a result, the number of water bodies in Chennai has shrunk from 60 in 1893, to just 28 in 2017. Along with this, poor implementation and maintenance of rainwater harvesting systems have resulted in the city being severely handicapped in terms of recharging groundwater.

In addition to these infrastructural issues, there is rampant and unregulated use of borewells by individuals all over the city to draw groundwater for personal use. All these factors have resulted in the near depletion of the groundwater table. The monsoons have also been rather uncharitable. With a deficit monsoon this year (as well as in two out of the last three years), the four main reservoirs that Chennai has left were at less than 0.1% of their storage capacity. These reservoirs usually supply water to Chennai till the next monsoon season.

These factors have led to almost complete dependence on water tankers, which supply groundwater from outside city limits. At the worst point of the crisis, there were around 700-900 CMSSWB tankers making 2-3 times the usual number of trips, as well as 4,500-5,000 private tankers making 5-6 trips daily. Though the entire city has been affected by the crisis, those belonging to the lower economic strata of the city have been affected rather disproportionately; the cost of buying the tankers that the city depends on has been an economic hurdle that many have struggled to overcome.

This series of images has been curated with the aim of documenting the struggle of precisely this group of people; the tankers only come once in a few days and each family has to fill up their buckets and drums and live judiciously on this rather small supply of water until the tankers return. Many families have to manage with just two medium-sized drums of water for over two days. Facing significant struggles in conducting their day to day activities, these people have become the biggest losers in a crisis that everyone helped bring about.