Stories of Construction – Homes of Nomadic Tribes of Pir Panchal 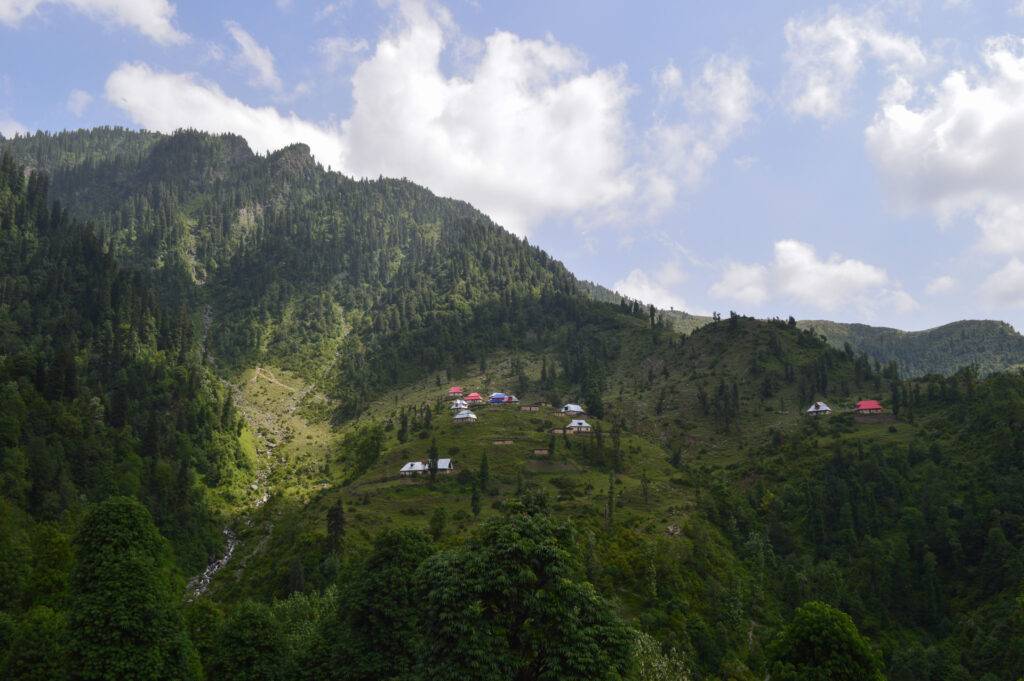 Dhoks, the highland pasture land of the local nomadic communities, is strategically located near a dependable source of water. The site for these settlements is selected such that it is neither too high to attract lightning bolts nor located in the way of potential avalanches. Photo by Razia Akhter

Gujjar or Van Gujjar and Bakkarwal communities are nomadic shepherding tribes residing in the Himalayan regions shared between India and Pakistan. In India, they primarily live in Uttarakhand, Himachal, and Jammu and Kashmir. Gujjars and Bakkarwals migrate with their livestock biannually. At the onset of summers, they migrate from lower altitude villages (gran) to highlands (dhok) and make the return journey at the beginning of winters. This migration is an old tradition that sustains pastures for their livestock and helps them escape the heat of low altitude villages in summers and the cold of high-altitude lands in winters. The two tribes are differentiated by the animals they keep – Gujjars primarily rear buffalos and Bakkarwals rear sheep and goats. 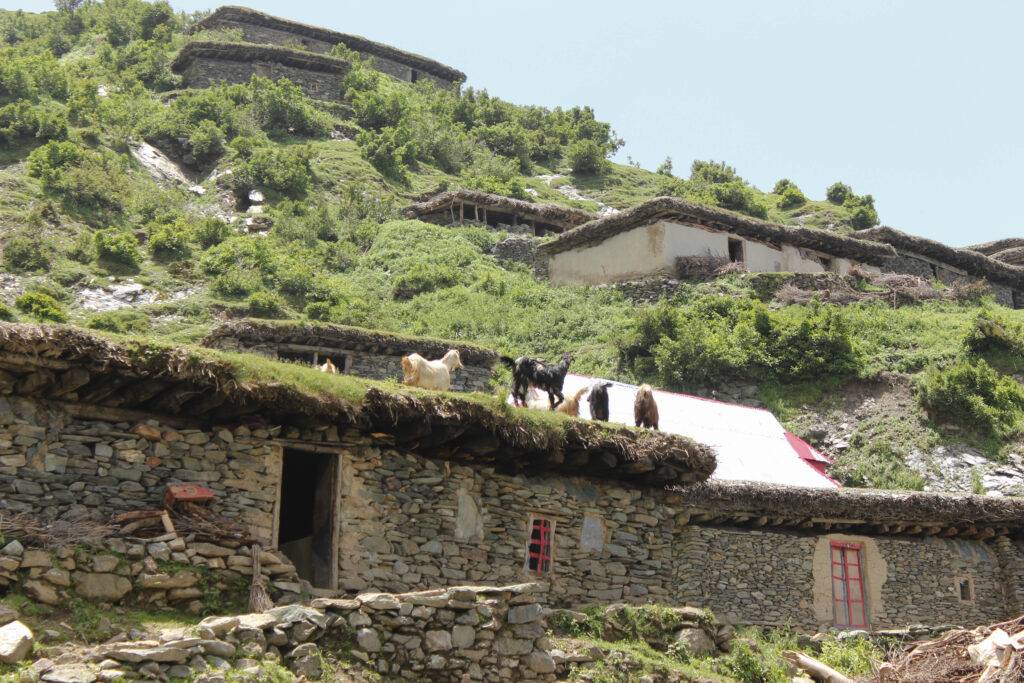 Dhoks, located in higher altitudes of the region as summer settlements of the communities provide good pastures for livestock and a respite from soaring summer temperatures. Many families no longer depend economically on cattle rearing but come to the dhok year after year to spend the summer in their ancestral lands. Photo by Bharati Gupta. 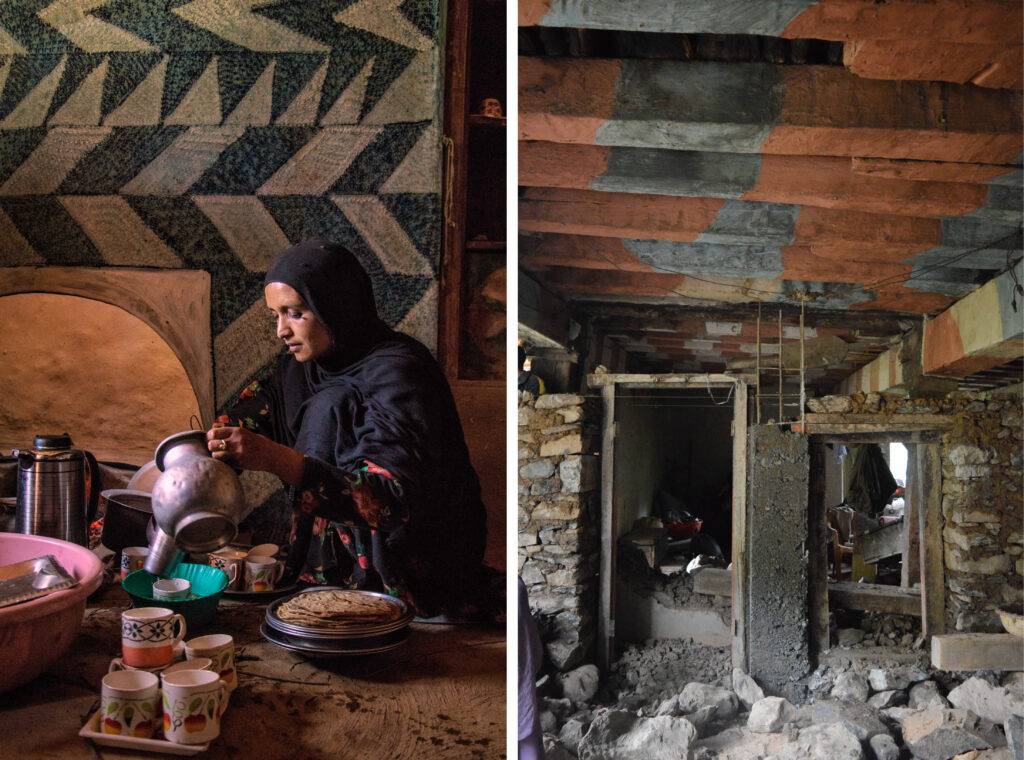 ‘Chulha’ is a stove made of clay. It is an integral part of the house, both as a source of fire for cooking as well as an ideal place for the inhabitants to keep warm. Photo by Nirjhar Ray. With the availability of many modern materials, a new construction language has been born. In cases where locals don’t build a new ‘pukka’ house, they often innovate with modern materials in the framework of old construction. Photo by Razia Akhter

The Gujjars of Surankote in Jammu and Kashmir traditionally dwell along the Pir Panchal mountain range, near the Indo-Pak Line of Control (LOC). Many of them have homes in villages where they stay in winters and grow crops throughout the year. Their houses usually comprise small units with many such blocks placed organically in the terrain working together as a unit. The livestock occupies the lower floor, and the family stays on the upper floor. All the spaces inside the houses are multi-purpose. One key area is the cooking space where food is cooked, served, and the family spend time together. They sometimes even sleep there as it is relatively warmer. These traditional houses, now called kutcha houses, are made of clay, shrubs, branches, and timber. The clay of suitable properties is collected from the village, and the timber is procured from the forest or is reused from old constructions. Dead trees from forests or non-endangered trees from the local property can be axed after acquiring permissions from the government. 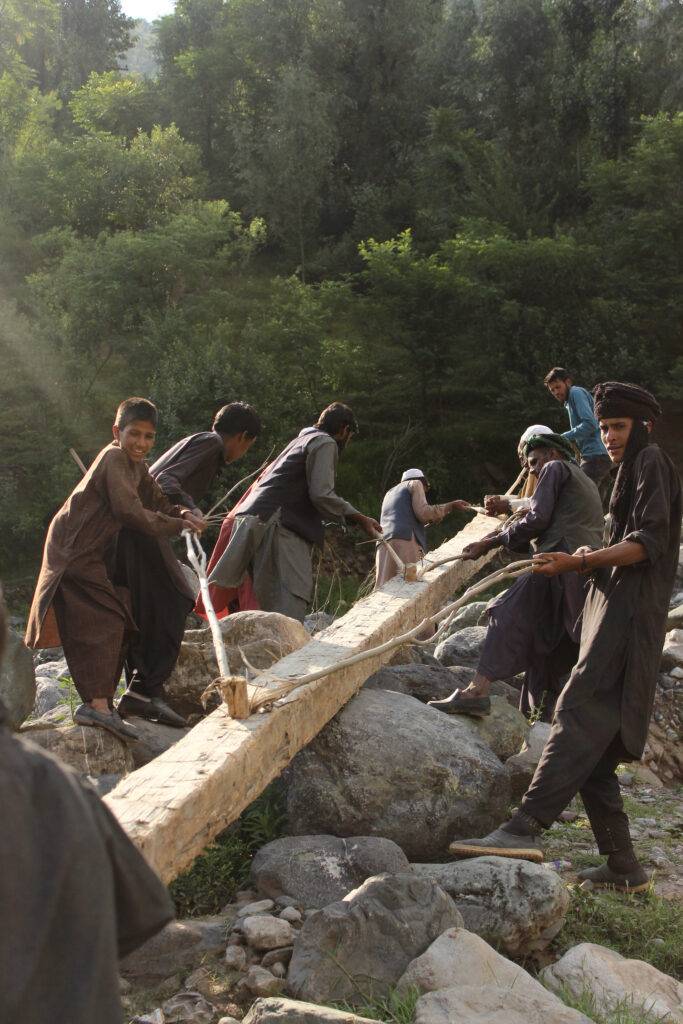 In the forest, trees suitable for construction are marked, and the permission to axe them is acquired from the Forest Department. Since the forests are located in inaccessible areas, the timber has to be transported manually. Men come together for this task, pulling the wood with ropes fixed to multiple pegs in the log. This job is done rhythmically with everyone pulling at the same time. Photo by Bharati Gupta 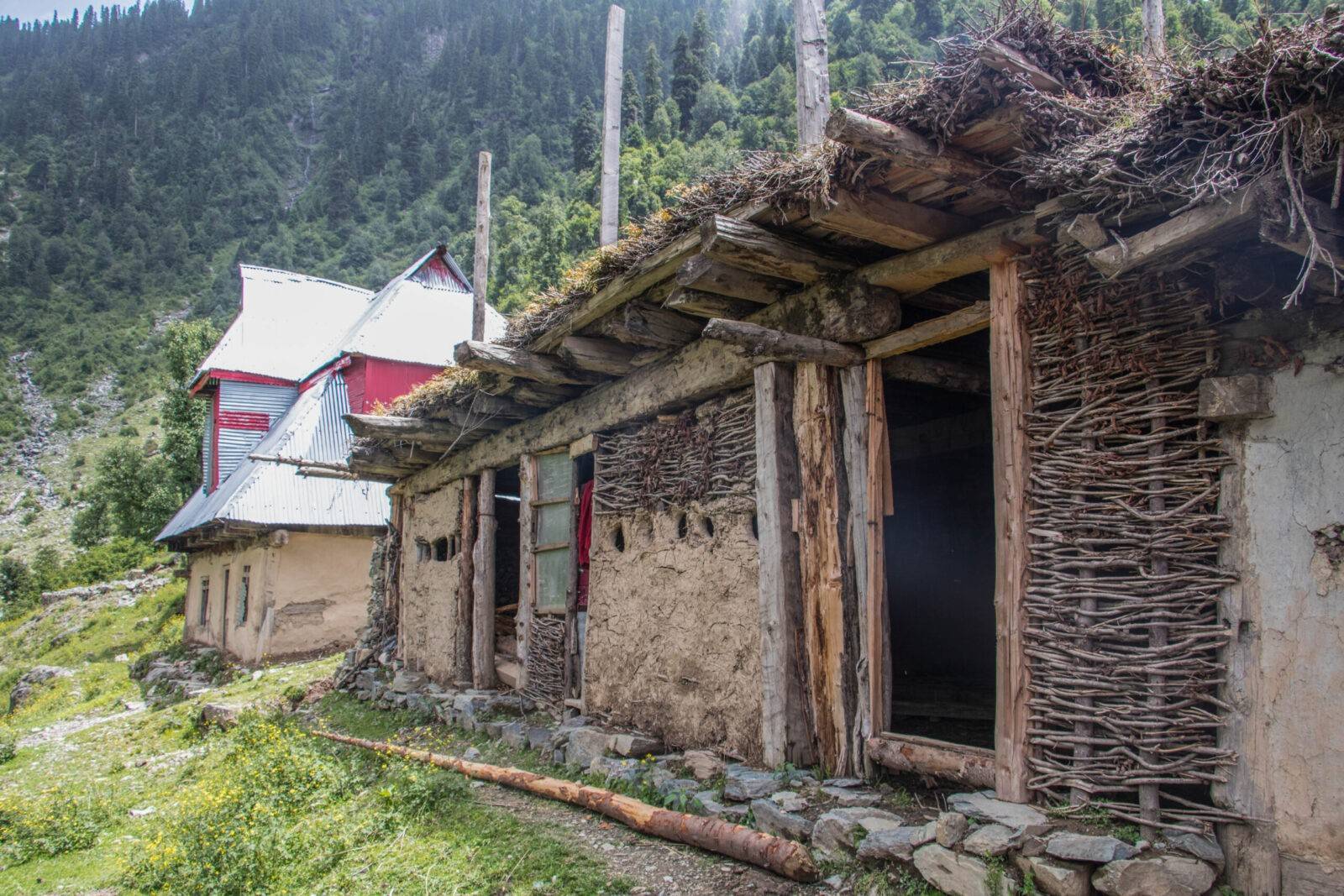 Wattle and daub construction put together by weaving tender branches on long and thin stems. The panels are then covered with mud mixed with husk and pine needles that act as binding agents. Photo by Nirjhar Ray 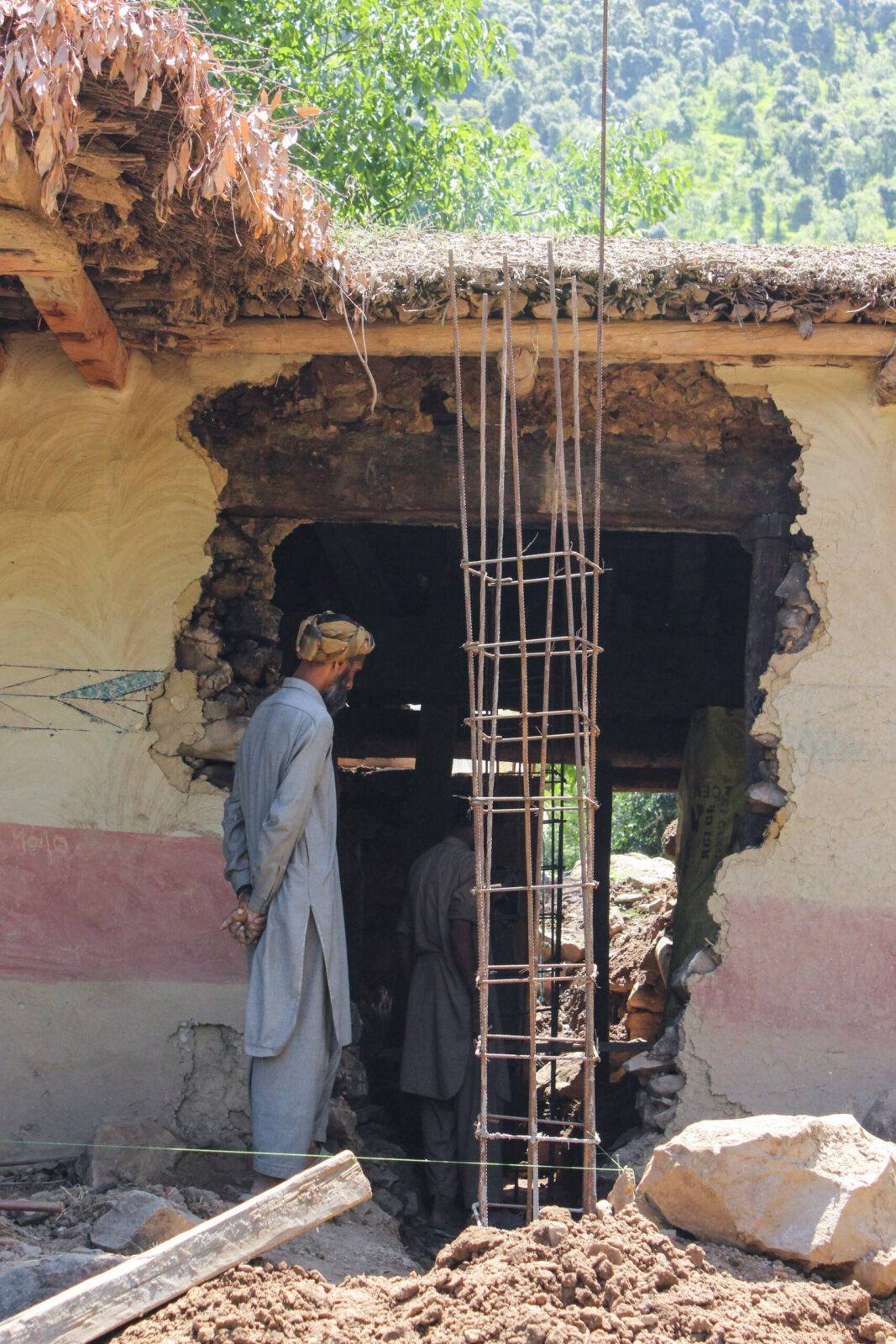 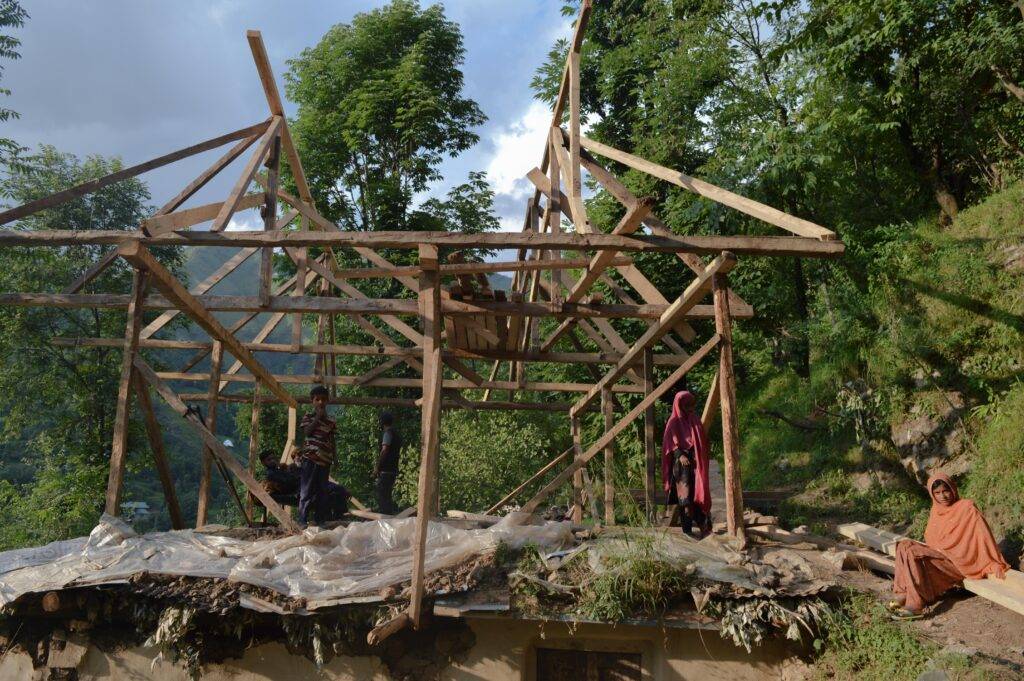 The wooden framework is erected on the roof of a traditional mud house. The line between the kutcha, pukka, and bungalow houses seems to fade in many cases, depending on affordability, site conditions, and space requirements. These hybrid house designs can be quite innovative, but sometimes precarious. Photo by Razia Akhter

Over the last decade, the community and the region have seen a drastic culture change. The community is shedding its traditional practices at an unprecedented rate. Amongst other changes, it is embracing new construction materials and techniques as a result of a prevalent aspiration in the community to have pukka houses (made of reinforced cement concrete and bricks). Locals associate pukka houses with ‘growth’ and ‘development’. Moreover, living in pukka homes saves the residents time and effort as the house does not require rigorous maintenance, and is more resistant to forces of nature like rains, snow and storms, as well as insects and pests.

The shift from kutcha to pukka is more pronounced in areas that are accessible by road. These areas have relatively more contact with the cities and have access to material like concrete and GI sheets. Most of the new roads were made by local contractors under Pradhan Mantri Gram Sadak Yojna (PMGSY), connecting sporadically spread villages. Moreover, an incentive to make a pukka house is provided by Pradhan Mantri Awas Yojana (PMAY). PMGSY, coupled with PMAY, has accelerated the transition to pukka houses.

Pukka houses are made of RCC, bricks, iron, and GI sheets. Brickwork has supplanted mud walls, and RCC slabs and GI sheets have replaced traditional mud, shrub and timber roofs. These new houses can typically be classified into two broad kinds – one with RCC roofing that is locally called ‘pukka makaan’ and the other with GI roofing referred to as ‘bungalow’. The RCC-roofed houses are less suitable for the local climate as they become too hot during the summer and too cold during the winter. Many locals, especially the older generation, complain that they cannot sleep in the “pakka makaan”.

Traditional houses of the Gujjar community, now often dismissed as the ‘kutcha’ house, are better equipped to respond to the local climate. They also do not have any long-term impact on the environment. They can be made and disassembled easily, and the material can be upcycled multiple times. Therefore, while embracing these modern materials and methods has its advantages, it does come at the cost of losing out on sustainable, and often practical, traditional practices. 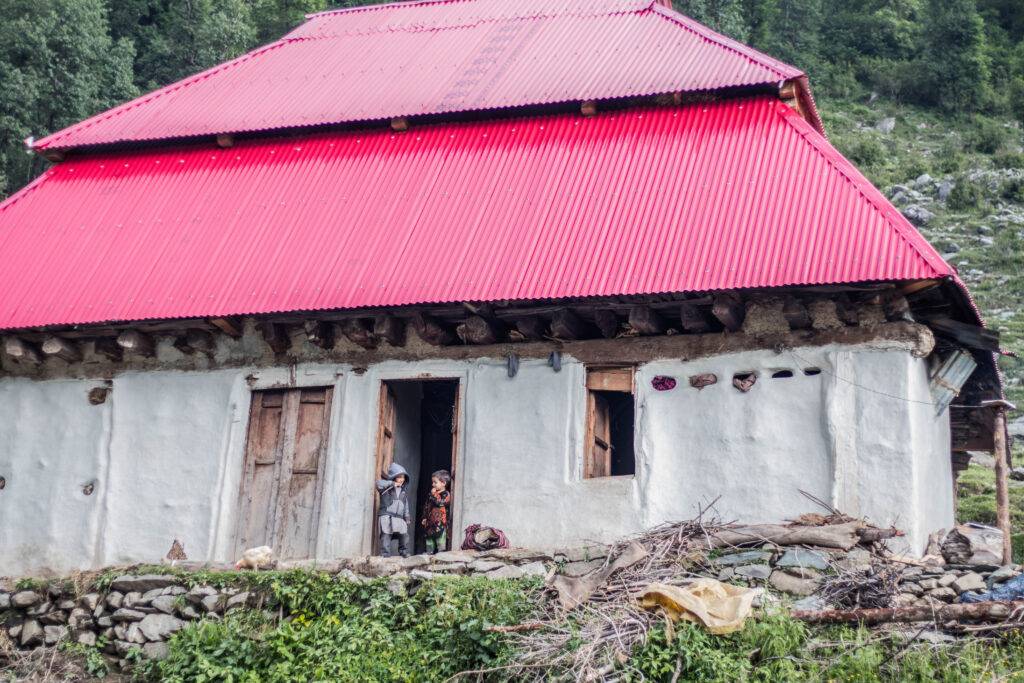 The old roof made up of wooden rafters can still be seen intact, and external supports have been provided in some points for the GI roof. Many locals prefer GI roofs as they provide extra space in the attic. Photo by Nirjhar Ray 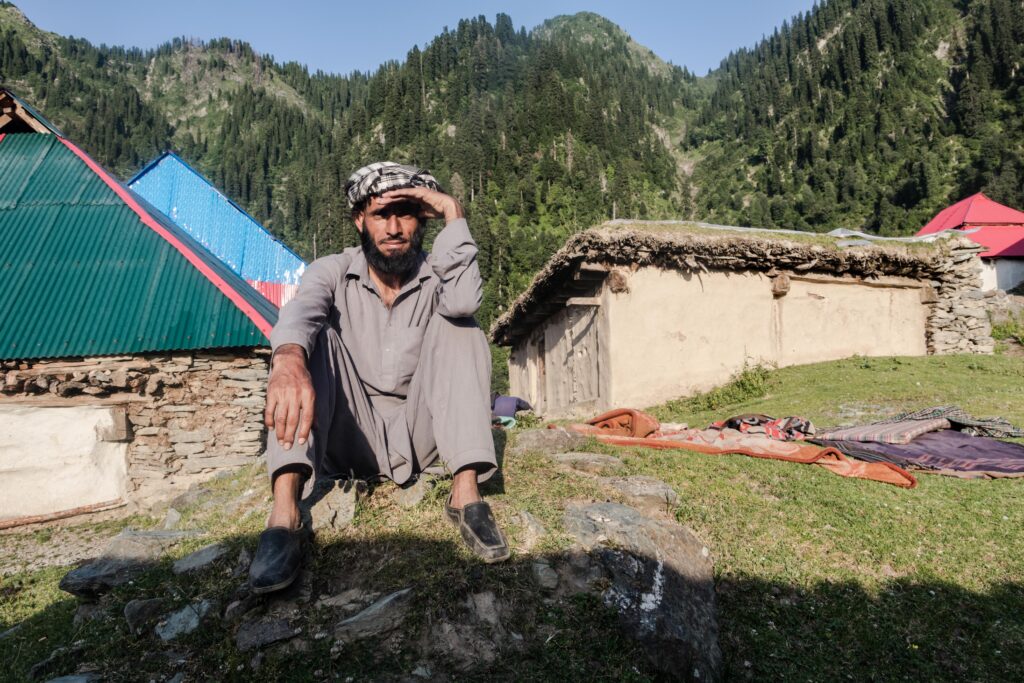 These photographs are part of a larger body of work that examines the interface of everyday life of people with their dwelling. It highlights the relationship between architecture, anthropology, and culture of the tribal Gujjar community in the Rajouri-Poonch belt of Pir-Panchal region of Jammu and Kashmir.

Parul Kiri Roy is an architect, academician, and art historian. She primarily engages with the idea of architecture as an outcome of the occupied space of people’s needs and user experience of the built environment.

Sumairha Mumtaz Choudhary is a graduate of architecture from School of Planning and Architecture (SPA), New Delhi. She is also an artist hailing from the Gujjar community of Jammu and Kashmir.