Conference of Parties: A Talk Shop?

The 27th United Nations Climate Change Conference of Parties [COP] was held in Sharm-El Sheikh, Egypt, between November 6 and November 18, 2022. Although touted as the authority on climate action decision-making, the long-term effects of COP remain to be seen.

Over the years, representatives have repeatedly called for ambitious global commitments to combat climate change without fairly assessing how climate crises impact developing countries and their adherence capacity to such commitments. For example, the Kyoto Protocol mandates developed countries to reduce emissions under the principle of “common but differentiated responsibility and respective capabilities,” [CBDR-RC] since the protocol recognises their high GHG emissions. However, even though the protocol specifies a rigorous monitoring and review system, the convention calls only for the signatories to adopt policies independently and self-report periodically without a binding mandate. The protocol specifies reducing emissions through trading of emissions permits but fails to safeguard the interests of developing countries in this regard.

Similarly, the Paris Agreement calls for limiting global warming below 2° Celsius compared to the pre-industrial levels based on nationally determined contributions [NDC]. However, only a handful of the 196 signatories can be considered industrialised. The agreement seems unjust towards the developing world since it neglects historical emissions. It fails to acknowledge that the industrialisation of present-day developed nations is responsible for the maximum global emissions. Additionally, there were no clauses to punish countries for non-compliance. For instance, the United States of America [USA], under the leadership of Donald Trump, backed out of the agreement without any repercussions.

A primary deliberation at the COPs is climate disaster funding. At COP15, rich nations promised to put together USD 100 billion in funding yearly for less wealthy nations towards climate adaptation and mitigation. However, this promise was not kept. In the event of a climate-induced disaster, which can lead to massive economic losses, the absence of a climate fund can ultimately lead to severe economic crises for developing and least-developed nations. COP26 attempted to uphold this commitment. However, it was opposed by the likes of the US and the European Union.

Recognising the need to develop suitable funding mechanisms, despite the Global North’s reluctance, the UN Climate Change Executive Secretary Simon Stiell put forth an agreement for a Loss and Damage Fund at COP27.

The Cost of Delay in the Loss and Damage Fund

Pakistan faced catastrophic floods this year, the most recent examples of climate-related disasters. One of the most devastating natural disasters in the country’s history, the floods led to the deaths of 1700 people, displaced millions more, and caused damages upwards of USD 30 billion. Pakistan framed the call for support to mitigate the damages caused by the floods as a call for climate justice rather than humanitarian assistance. However, this call did not gain enough traction from developed nations since taking action on this call would essentially mean admitting to climate injustice.

Commenting on the glacial pace of climate negotiations, Sherry Rehman, Pakistan’s Minister of Climate Change, argued for a more robust approach to transferring resources. Though responsible for less than 1% of the global carbon emissions, Pakistan is the 8th most vulnerable country to climate change.

COP27 laid out a roadmap for the fund but pushed certain decisions to next year’s UN climate summit. Important decisions about who will oversee the fund, how the grants will be disbursed, and who will be responsible for upholding the commitments by the funding nations have been postponed to next year’s conference. All these decisions are time sensitive in the fight against climate change, specifically for developing countries that bear the brunt of climate disasters. However, among all the pushbacks from developed nations, the fund might turn out too little, too late. The possibility of climate-induced natural disasters similar to floods in Pakistan cannot be discounted. A delay in establishing the loss and damage fund will only add to the economic woes of the developing countries.

Finding a Stage for Developing Nations

Since the inception of COP in 1995, several agreements have been signed, many pacts have been created, and hundreds of climate summits have taken place worldwide. The goal of the COP has been to uphold global commitments to climate change and reduce GHG emissions while limiting global warming to a certain level. However, this is far from the present scenario. 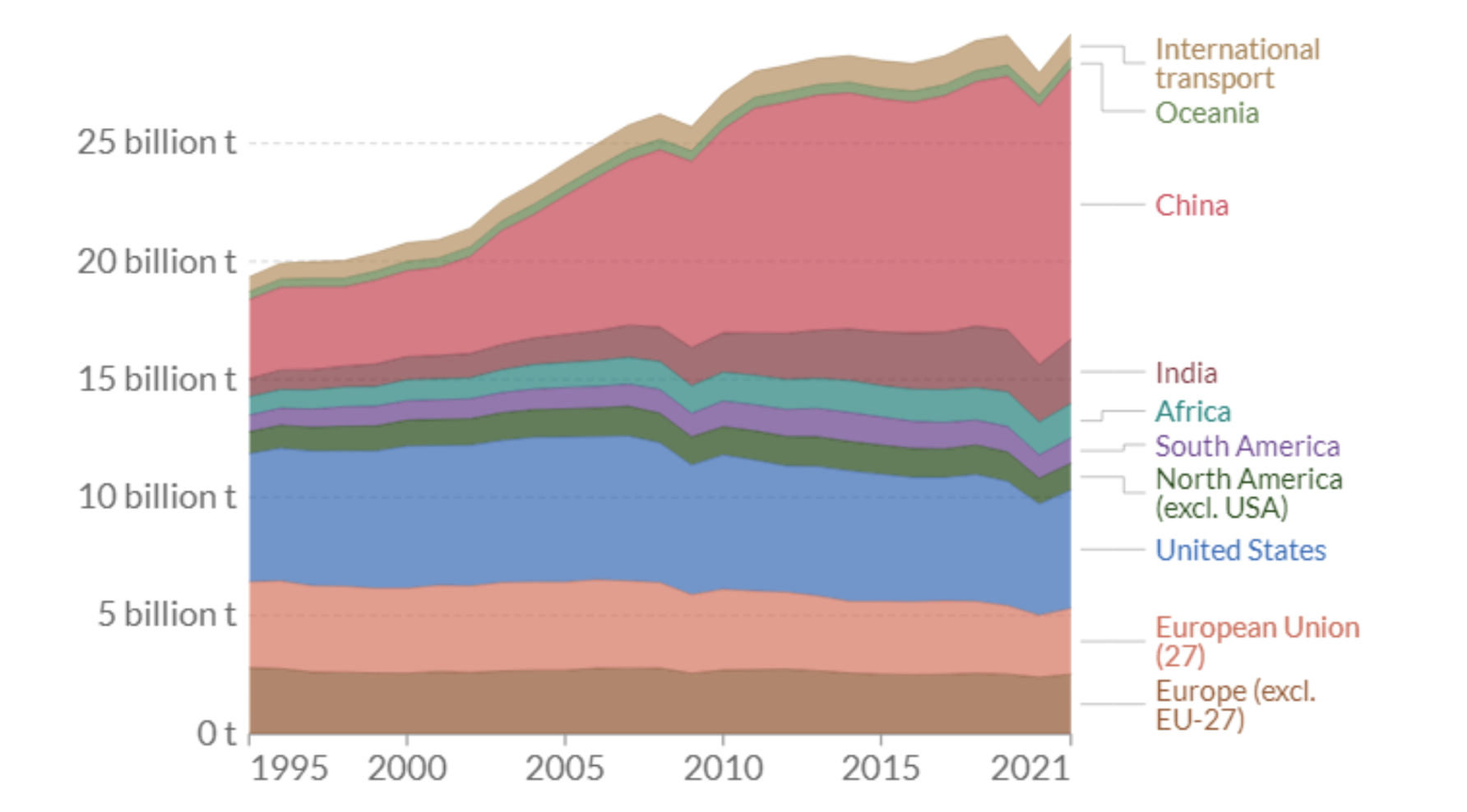 Source: Our World in Data based on the Global Carbon Project (2022)

Figure 1 portrays the global carbon dioxide emissions from different regions worldwide from 1995-2021. Over this period, important commitments like the Kyoto Protocol and the Paris Agreement have been made. However, the lack of implementation and rigorous monitoring has led to GHG emissions remaining consistent over time, with an increasing trend over the years. With most nations delaying meaningful action until after 2030, doubts arise about the achievability of the Net Zero goal. These trends bring about the question: what happens at these conferences? Are they a means for developed nations to find loopholes to continue emitting GHGs as usual?

Furthermore, the COPs have not effectively addressed the problem of  ‘outsourcing’ carbon emissions. Over the past few decades, several western countries have set up industries and factories in developing countries like India and China. These countries enjoyed the benefits of industrialisation and, when faced with pressure from environmental deterioration, covertly shifted polluting operations to other parts of the world. Even the most recent COP27 failed to address this aspect. Until developed countries take the lead in reducing emissions and stop lobbying for ‘Net Zero for all by 2050’, they will continue diminishing the developing world’s capacity to industrialise. For this to become a reality, developing countries must take a solid stance at COPs and lobby for differentiated responsibilities regarding climate action and emission reduction. Developing countries like Bhutan, Suriname, and Panama – countries without Net Zero pledges – are carbon-negative countries and serve as prime examples of positive climate action. These countries have a strong agenda of protecting their forests and carbon sinks instead of following an emit now, mitigate later strategy.

On the other hand, developed countries with the capital and capacity to incorporate climate-friendly strategies routinely delay meaningful action. Therefore, the main goal of COP should be to have developed nations commit to Net Zero emissions by 2030 while giving some leeway to developing countries. COPs must also adequately enforce the concept of climate justice and other related aspects like the loss and damage fund and technological transfers. Otherwise, a common Net Zero goal for all by 2050 will lead to unfair responsibilities and increasing inequalities.